The choice to go down the route of altering the suspension kit was one of being able to use the car more as a daily and for longer distances, but also removing the nervous nature of the car and improve the handling. Now with the adjustable AST kit in place, the car is more relaxed and pleasant on country roads, no long tramlining, and offers a wider usability while even improving its ability on track.

With both the engine and suspension out of the way, it is time to touch on the stock tires. With three different Hankook tire kits on offer for the car, there are a wide range of options. The stock Hankook tire is a bit too soft, especially on track. The winter tire set was initially a complete unknown, but came eventually in a really weird size and requires a new tiny rim.

You might ask yourself the question; why doesn’t the GP3 have those tires? According to MINI, the Hankook is the preferred supplier to many MINI models so it was only natural to retain the relationship. Of course, there are some other options out there fore the 225/35R18 size, like the Michelin’s Pilot Sport 3. At the positive end, the wheels are extremely light, weighing less than 9kgs. 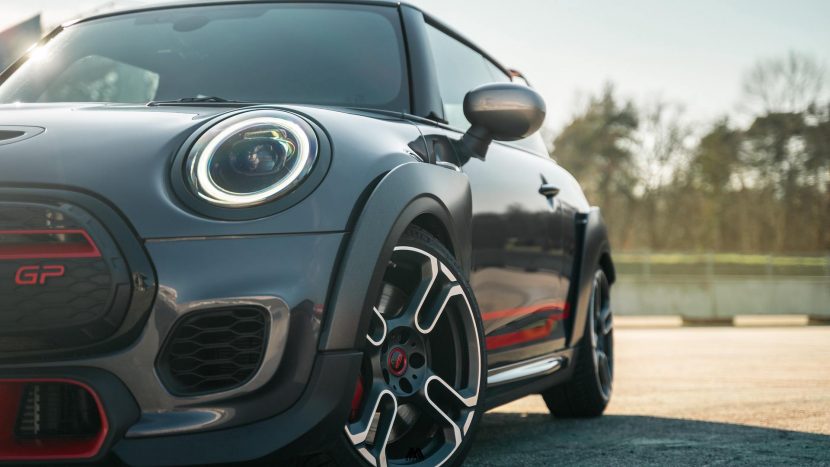 With more than 10,000 kms done behind the steering wheel of the new GP3, it has become clear to me how well the improvements have brought out that untouched nature of the MINI. That is not only because of my own experiences so far, but more importantly the input throughout the user base and community which has offered a large combined insight into the GP. Therefore if you look to improve the car, look at these three key aspects; the suspension, the tires and the engine.

Of course, numerous people would say that more power is needed, along with a louder exhaust note, and a manual gearbox. Although these are must-haves you could look at other enhancements such as a brake upgrade with better pads, braided lines, an enhanced disc and improved brake oil, or bucket seats and a cage. Those often come into play when you want to really expand your horizon on track and are for the GP3 a matter of “stage 2” in the range of improvements.

What else is there to mention that could be of interest for you as a potential (future) owner of a GP3? There are few points to note that are immediately noticed when you live longer with the car. First up is the absence of MINI’s interior light kit. The GP3 doesn’t have any lights in the footwells, no glove compartment light, no rear compartment light. Of course, as a track car wouldn’t have those. But during the winter period, the absence of light sources in the cabin created an interesting experience in which I had to use my phone’s flashlight to find things across the cabin.

Also the absence of any baggage nets in the trunk offered for an interesting challenge. In the end, I ordered two aftermarket ones, which I attached into the rear compartment not allowing any things in the trunk to fly around under braking, cornering or accelerating.

An interesting point is the space in the trunk. Without having rear seats and a rear parcel shelf, you lose a considerable amount of weight, but also gain a lot of space which you can use for a set of track tires, which just fit in the rear. This allows you to bring a second set of tires to a track day or run your street tires to/from the track and your track tires on the circuit.

I left the most discussed subject as the last one of my story – the wheel arches. This has been a hot topic in the MINI community regarding their practicality and design. But we asked the MINI folks for the reason behind their design. According to MINI, the GP3 had to include those wheel arches for homologation reasons. The tires need to be covered by the wheelhouse to a certain extent, not only in Europe, but even more so in countries like Japan. This is why the spats had to be that large.

So whether we like them or not, they’re part of legal requirements.

Auto Experthttps://automobiledot.com
As an Editor and an Automobile Geek, it's my pleasure to share my knowledge about Automobiles and their various aspects that can impact our lives.
Previous articleClassic Recreations launches resto-mod Bronco builds
Next articleChinese company offers ‘M3 Big Mouth Front Bumper’ for E60 5 Series

When the days were really short last winter, and...
Read more
Cars