We’re in the middle of an off-road pickup truck craze, from the high-powered Ford F-150 Raptor to the unique Jeep Gladiator. But it’s not just OEMs getting in on the action, aftermarket companies are cashing in on off-road upgrades including Roush, which has an upgrade package for the 2020 Ford Ranger.

Visual upgrades abound, and the exterior ones do their best to make the Ranger look like a Raptor. You’ll immediately notice the grille with big “ROUSH” lettering in the middle instead of “FORD.” And instead of amber marker lights, two sets of LED running lights are fitted in the top of the grille. The fenders receive dark metallic painted flares that add a little bit of width, and there are Raptor-esque LED markers at the rear. Roush adds a smattering of graphics around the truck and some red-painted tow hooks, too. Inside, Roush fits custom diamond-stitched leather upholstery, Roush branding on the instrument cluster, WeatherTech floor liners, a custom key fob and a big badge on the dash.

As for mechanical upgrades, they’re fairly mild. The 18-inch Roush wheels are fitted with 32-inch all-terrain tires. The truck sits on Fox 2.0 shocks with matched Roush springs, which level the ride height similar to the Ford Performance levelling kit. Roush also adds its own cat-back exhaust that adds sound, but no power to the Ranger’s otherwise stock 2.3-liter turbocharged four-cylinder. All added parts are under warranty for three years/36,000 miles.

We only had a few hours with the Roush Ranger, so our drive was entirely on the street. And as one would expect from the modification list, it doesn’t drive particularly different to a regular Ranger. The suspension does seem better tuned than the factory Ford FX4 off-road suspension, as it’s smoother and better controlled over bumps. It doesn’t add any more body roll, and the steering is still reasonably precise with some mild feedback. There’s not much grip on pavement, though, compared with Rangers with less aggressive off-road tires. As for the exhaust, it’s got some four-cylinder snarl, but it’s rather loud under throttle, and it can drone in the mid-rpm range. Fortunately, if you’re cruising on the highway, it’s very quiet.

The rest of the truck is just like any Ranger. The turbo engine is responsive and has great low and mid-range torque. The transmission is just average, shifting relatively smoothly, but not quickly. The cabin is fairly quiet, though it feels a tad small, and the plastics feel cheap. Roush’s diamond-stitched leather seats are a nice improvement, though it would’ve been nice to see Roush do a little more to spruce up the interior. The exterior is a nice balance of more butch cues like the grille, and subtle changes such as the fender flares.

The issue is that these mild upgrades cost a lot. The basic package is $12,750, which is then added to the cost of truck that will be converted. Our test example was based on a Ranger XLT Crew Cab with a base MSRP of $42,515. In addition to the basic Roush package, Roush fitted optional extras including a $1,800 bed cover, front and rear lock boxes costing $400 each, and a $250 off-road utility kit. All-in, the truck had a price of $57,980. That price can climb higher, since Roush has a variety of other options including a cargo management system, chase rack with LED light bars, and additional side stripes. And of course you could spec out an even more expensive base truck to have converted. 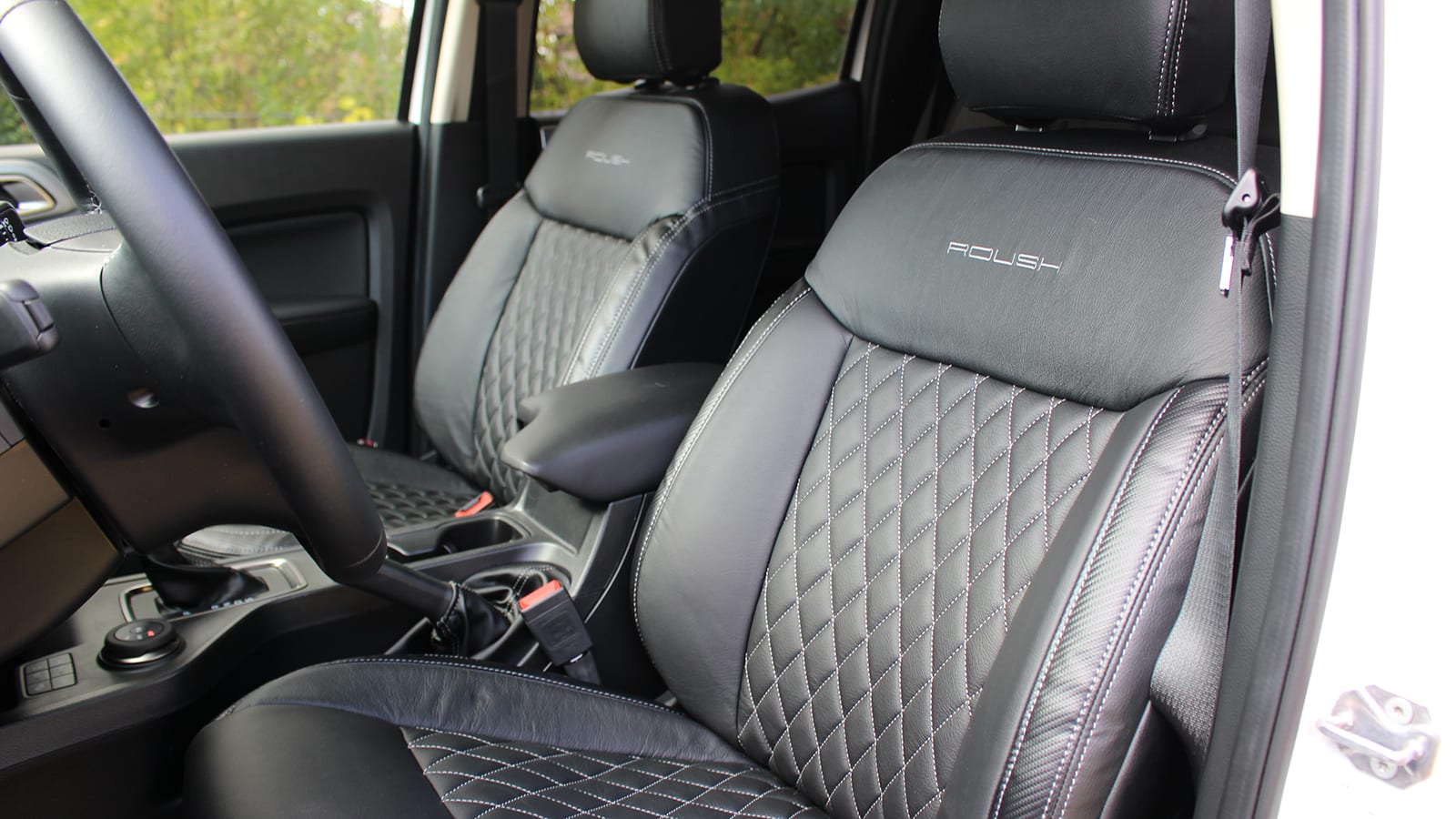 As it so happens, our test truck cost about $2,000 more than a base Ford F-150 Raptor, which starts at $55,150. And the Raptor is a bigger truck, with far more power and off-road capability. Now, not everyone wants a bigger truck, but you can get more performance and still pay less money by building out your Ranger with official Ford parts. We managed to equip a Ranger XLT SuperCrew 4×4 very similarly to our test Roush truck. It included fender vents, exterior graphics, big fender flares, a retractable bed cover, floor liners, cat-back exhaust, and the Ford Performance Package 2 that features Fox shocks, matching springs, blue tow hooks, off-road all-terrain tires, and an engine tune that brings output to 315 horsepower and 370 pound-feet of torque. Total cost? $48,075. There may be some minor fees associated with installing the performance package, but likely not enough to eclipse the Roush test truck. It does lack the diamond-stitched leather seats, lock boxes and 18-inch wheels of the Roush, but you could fix all that with the money you saved, and have a higher-performance truck.

So there’s nothing wrong with the Roush Ranger, it just doesn’t seem like a good value. But if you really like the looks and the Roush name, it’s a perfectly pleasant, if pricey, pickup.

Auto Experthttps://automobiledot.com
As an Editor and an Automobile Geek, it's my pleasure to share my knowledge about Automobiles and their various aspects that can impact our lives.
Previous articleHonda UK hopes to restart Monday after parts shortage shuts down production
Next articleSmooth snakes have rough day in court against Tesla