Never before has a super wagon comparison test between Mercedes-Benz and Audi been possible in the United States. Mercedes has sold a hell-raising estate car here for nearly two decades, but Audi has frequently declined to bring its spiciest wagons here, citing silly things like “sales” and “financial sense.” That’s no longer the case, thanks to the 2021 Audi RS 6 Avant.

It’s the latest in a long line of beautiful, asphalt-demolishing Audi Sport wagons, and Americans are finally getting a taste of a vehicle intended to be the ultimate one-car solution for car enthusiasts. It promises to not only demolish race tracks and be as quick as supercars from a decade ago, but also eat up highway miles in comfort and ferry an entire family and its luggage. You know, the very thing Mercedes’ AMG wagon has been for years. And for the 2021 Mercedes-AMG E 63 S Wagon, those mad lads in Stuttgart have greeted the Audi’s arrival with an update of its benchmark uber wagon. What a rude welcome.

Both longroofs are propelled by 4.0-liter twin-turbo V8 engines aided by 48-volt mild-hybrid electric systems. But don’t be fooled. There is nothing green about either of them. The AMG E 63 S manages to eke out more power with final output landing at 603 horsepower and 627 pound-feet of torque. Audi trails shortly behind at 591 horsepower and 590 pound-feet of torque. According to manufacturer estimates, the sprint to 60 mph requires 3.4 seconds in the Mercedes, and 3.5 in the Audi. On paper, the two engines may seem a bit copy-paste, but they’re anything but that from behind the wheel. 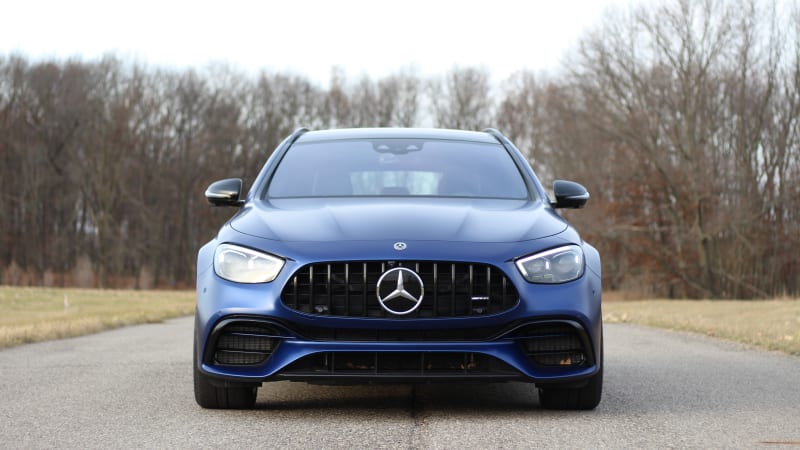 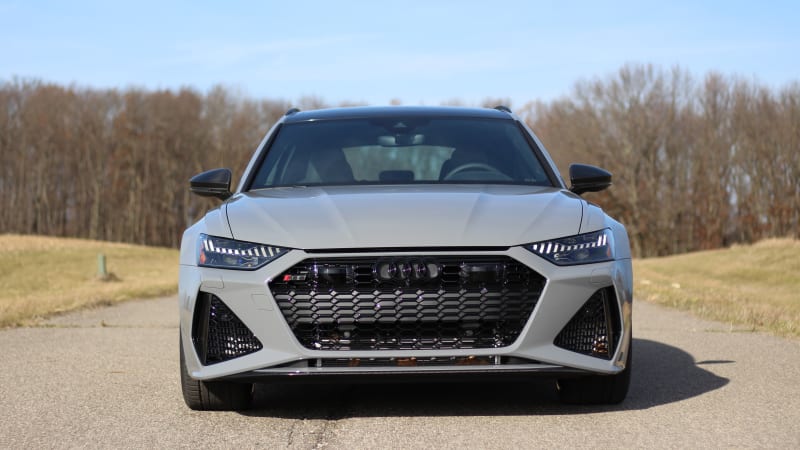 A low, bassy grumble steadily increases in volume inside the Audi up to redline, whereas the Mercedes’ revs zing upward with a pretty, mechanical-sounding trumpet of V8 nastiness. The noise is just the first hint that the AMG wagon is rawer than the Audi. Mercedes transmits every pound-foot of torque through your bones with the right pedal pinned. Active engine mounts stiffen up at the twist of the mode dial, giving the AMG an even greater sense of immediacy. Each throttle input is met with an instant response, beckoning to your will so quickly that it masks the turbocharged nature of this engine. It quickly begins to feel like an extension of the driver.

The Audi is numb and distant in comparison. It’s covering the same amount of ground at the same speeds, but it’s doing so with a filter. Where the Mercedes’ engine is alive and dancing, the Audi’s V8 just feels like it’s going through the motions. Yes, our heads are pinned to the headrest, but we feel further away from the wagon’s beating heart. Responses aren’t as sharp, either. There’s a split-second more turbo lag and shifts aren’t quite as crispy or scintillating.

Using the ZF eight-speed transmission, as the Audi does, is normally a foolproof way to bring both performance and refinement to a powertrain (even BMW M cars use it these days), but Mercedes’ nine-speed multi-clutch transmission is a superior partner in spirited driving. Each upshift is met with a firecracker bang, and every downshift is invigorating, encouraging you to keep pulling the down paddle while braking into corners to hear the guttural (and slightly childish) pops and bangs. The Audi shifts are stupid-quick in a vacuum, but its responses seem dulled when driven back-to-back with the Mercedes. Not to mention that the Audi has tiny, hard-to-reach paddles with middling action versus Mercedes’ large, clicky shift paddles. Ultimately, the Mercedes is far more entertaining to shift yourself, but both are perfectly smart and capable of putting you in the right gear in automatic mode on a country road.

But can they go left and right, too?

Of course. Similar to the engine story, though, the E 63 S has the edge. Both these wagons are fitted with air suspensions that are fully adjustable from pillow-soft to racetrack-stiff. Fiddling with the settings returns different results and opinions each time we swing around to the same stretch of pavement. But no matter what combination the Audi is set to, it still can’t touch the brilliant chassis tuning on display in the Mercedes.

It’s hardly believable that the AMG wagon is riding on an air suspension, because it exhibits none of the typical springiness or bounce. It’s pinned to the pavement, forgiving and stable on poor road surfaces, but scissors through smooth roads like a bayonet through fabric. The steering is just right in Sport+ mode, providing a natural level of feedback and proper weighting to instill confidence in the chassis. It’s a natural athlete, springing from corner-to-corner with spunkiness and capability we tend to associate with Porsche. After two straight hours of dancing around our favorite roads in the Mercedes, we’re left wondering, what more can you want?

Audi surely knew it would be difficult to best the AMG’s handling, but engineers sure did try. With zero hint of understeer, the RS 6 Avant eats up corners. It turns in quicker than the Mercedes (thank the all-wheel steering system) and has a quicker, lighter steering rack in general. All that’s perfectly fine for scything through the local roundabouts, but it’s a step behind the E 63 S everywhere else. There’s no hiding the air suspension underneath here, as the RS 6 Avant struggles to retain its composure over rough stretches of road that were simply shrugged off by the Mercedes. You move around in the seat more as the huge 22-inch wheels skip and bounce through road undulations. Similar to the engine situation, the Audi is fundamentally capable beyond anyone’s road needs, but it speaks back through a thick layer of insulated glass. Remove it, punch up the atmosphere, and you get the Mercedes. AMG made its wagon more fun to drive than Audi Sport. Period.

If this were a two-seat sports car comparison test, Mercedes would likely have clinched this already. But not so fast. These are wagons, and to be the best, they also have to do wagon things.

That means they have to be comfortable to drive every day, hold all your luggage and accommodate backseat passengers. The question of comfort is where all the Mercedes’ high-performance characteristics come back to bite it. Where the Audi is whisper quiet inside, a not-insignificant amount of road noise intrudes into the Mercedes’ cabin. Both suspensions soften in their respective comfort modes, but the E 63 S Wagon’s stiff chassis that is so lovely on a backroad imparts a smidgen more impact harshness on the highway. Even with the worryingly thin spackling of rubber wrapping the Audi’s 22-inch wheels versus the Mercedes’ 19-inch rollers, the RS 6 Avant is the more comfortable cruiser.

Hanging out in the Audi’s back seat is marginally more pleasant than the Mercedes, thanks to a small advantage in legroom (about an inch). However, both are spacious enough for adults and offer dedicated climate zones separate from the front seats. The Mercedes takes a marginal win in cargo space (35 cubic-feet), as the Audi’s heavily angled rear window cuts into maximum cargo capacity to the tune of 5 fewer cubes. More luggage will ultimately fit in the Mercedes, but you can still stack four full-size suitcases into the Audi, and that’s the bogey for this size of car.

Both these wagons impress and annoy from the driver’s seat. Audi’s modern architectural interior design is fashionable and oozes wealth, but Mercedes appeals to our desires for elegant and beautiful design. The touchscreen-heavy Audi setup looks and feels fancy now, but we were yearning for physical controls to adjust the drive modes and climate control system almost immediately.

Mercedes manages to frustrate in a new and different way this year, as the E-Class’ new touch sensitive steering wheel controls are downright nightmarish to use. The wonderfully tactile scroll wheels and solid-feeling switches of before were replaced with shiny black surfaces that only responded to our swiping inputs part of the time. Losing even a fraction of finger placement precision by using gloves on the touchpads would quickly drive us to insanity. Even with that annoyance, Mercedes keeps us on its good side with perfectly-molded seats (better-hugging than Audi’s sport seats), a lower dash height for better visibility, and somehow, even more performance gadgets and gizmos hidden in the infotainment system.

The single area where Audi pulls a resounding victory is in exterior design. There’s simply no better-looking family car on sale today. Its hips flare out far more aggressively than the AMG’s. The Audi even has laser lights with a warning not to look directly at them … because they’re freaking lasers. That’s a dub in the Audi column. Mercedes may have upped the drama in the E 63 S this year with the large, radiator grille, but it’s still meek and timid-looking when parked next to the RS 6 Avant.

Picking one over the other based on price elicits zero advantages. The RS 6 Avant starts at $110,045, whereas the E 63 S Wagon starts at $113,500. Both our test cars were optioned to nearly identical specs — the Audi ended at $131,645, and the Mercedes at $137,850. Deleting the gorgeous $3,950 designo Brilliant Blue Magno paint option from the AMG would be sad, but a free paint option like the Audi’s Nardo Gray would bring the totals much closer. Basically, you can either afford it, or you can’t. There is no budget option.

With price out of the equation, our hearts do the deciding, and the 2021 Mercedes-AMG E 63 S Wagon has stolen ours. This wagon has the utility of a family truckster and the beating heart of a sports car. A litany of smile-inducing elements imbued in the Mercedes ultimately put it over the edge. From the way it squirms so happily as you squeeze onto the throttle exiting a corner, to the unpredictable barks and bangs emanating from the quad exhaust, the Mercedes is just a couple rungs higher up the performance ladder. Its negatives aren’t nearly persuasive enough to sway us in the direction of the shiny, new RS 6 Avant.

But props to Audi for finally entering this brutally difficult and tiny field in the United States. The Mercedes’ victory should not be read as a recommendation to not buy the Audi. It’s the better wagon for slogging back and forth to the office in serenity, but it just won’t make your hairs stand at end on a twisty section of road. For that level of driving satisfaction, Mercedes gets the nod.

Auto Experthttps://automobiledot.com
As an Editor and an Automobile Geek, it's my pleasure to share my knowledge about Automobiles and their various aspects that can impact our lives.
Previous article2022 GMC Sierra Denali will get Super Cruise and an interior redesign
Next articleBMW M2 CS review dubs it ‘Last Great BMW M Car’

The unprecedented surge in prices for used cars was...
Read more
BMW