Despite all the criticism of steering feel and attacks on watered-down driving dynamics directed toward BMW these days, the company still has what it takes to make an enthusiast’s sports car. For evidence, look no further than the 2021 BMW M4. Forget the hyperbolic reaction to its twin nostrils and goofy hype videos. Just drive the new M4, and you’ll quickly tune out all of the internet keyboard warriors preaching that BMW has lost its way. If this car is what losing your way feels like, then count us in.

The M3 and M4 (M4 again standing in for the M3 coupe designation) are historically inconsistent buggers. Over the generations, BMW went from a four-cylinder, to an inline-six, up to a V8 and then to a boosted inline-six more recently. We’re still in the Boost Age, so BMW kept the story simple this time with another twin-turbo inline-six. Where you’ll find the revolutionary change is in the arrival of the xDrive model. Yes, BMW for the first time is making all-wheel drive on option for both the M3 and M4 (and standard on the convertible), but that’s a story for another day.

There are two versions of the new inline-six (codenamed S58), one for Competition models and one for the standard M3/M4. We drove the standard version with the six-speed manual. The two variants of the engine are different enough from a spec sheet perspective that we’ll hold off on drawing any conclusions on the Competition. How different? Only 30 horsepower separates them, but the real kicker — literally, it will offer more kick — is the Competition’s 73 lb-ft of additional torque. In whole numbers, the base engine makes 473 horses and 406 lb-ft of torque, while the Competition models crank out 503 horsepower and 479 pound-feet.

That extra twist for the Competition is sent exclusively through an eight-speed torque converter transmission, not the dual-clutch automatic from the previous generation. The base engine’s manual gearbox saves 50 pounds, slightly improves the front-to-rear weight distribution, and is exclusively paired with rear-wheel-drive. It’s also a rare sight in luxury sports cars in 2021. You can’t spec the Mercedes-AMG C 63, Audi RS 5 or Alfa Romeo Giulia Quadrifoglio with three pedals, making BMW’s continued commitment to the stick shift all the more laudable.

Neither the engine nor transmissions are what make the new M4 a superlative sports coupe, though. The wizardry in the chassis and suspension is what ultimately separates an M car from the standard models, and BMW nailed it this time. The litany of changes for the M model are enough to form an extra-run-on sentence, so here’s an abbreviated list: new aluminum wishbones, aluminum torque arm, forged swivel bearing, lightweight wheel bearings, lowered roll center and added crossbar stiffening to the front and rear subframe. Pop the hood, and you’ll find braces everywhere. The front track is 1.5 inches wider than before. The list goes on. What’s important to note here is that all of these changes make the M4 feel like a totally different car than a standard 430i or even the M440i, and those two are no handling slouches.

All of the above is necessary to help counteract the M4’s weight gain, which is a not-insignificant 300 pounds from the 2015 car to the 2021 version. The M4 weighs 3,830 pounds now — granted, that’s still lighter than the C 63 S Coupe and RS 5 coupe, but the M4 is in the same heavyweight ballpark.

Acceleration is hardly troubled by that mass thanks to the extra power, 48 horsepower more than before. BMW claims the manual sprints to 60 mph in 4.1 seconds — identical to the outgoing car — while the automatic is 0.1 second quicker, hitting the mark in 3.8 seconds. Top speed is 155 miles per hour if you don’t check the box for the M Driver’s Package and 180 mph if you do. 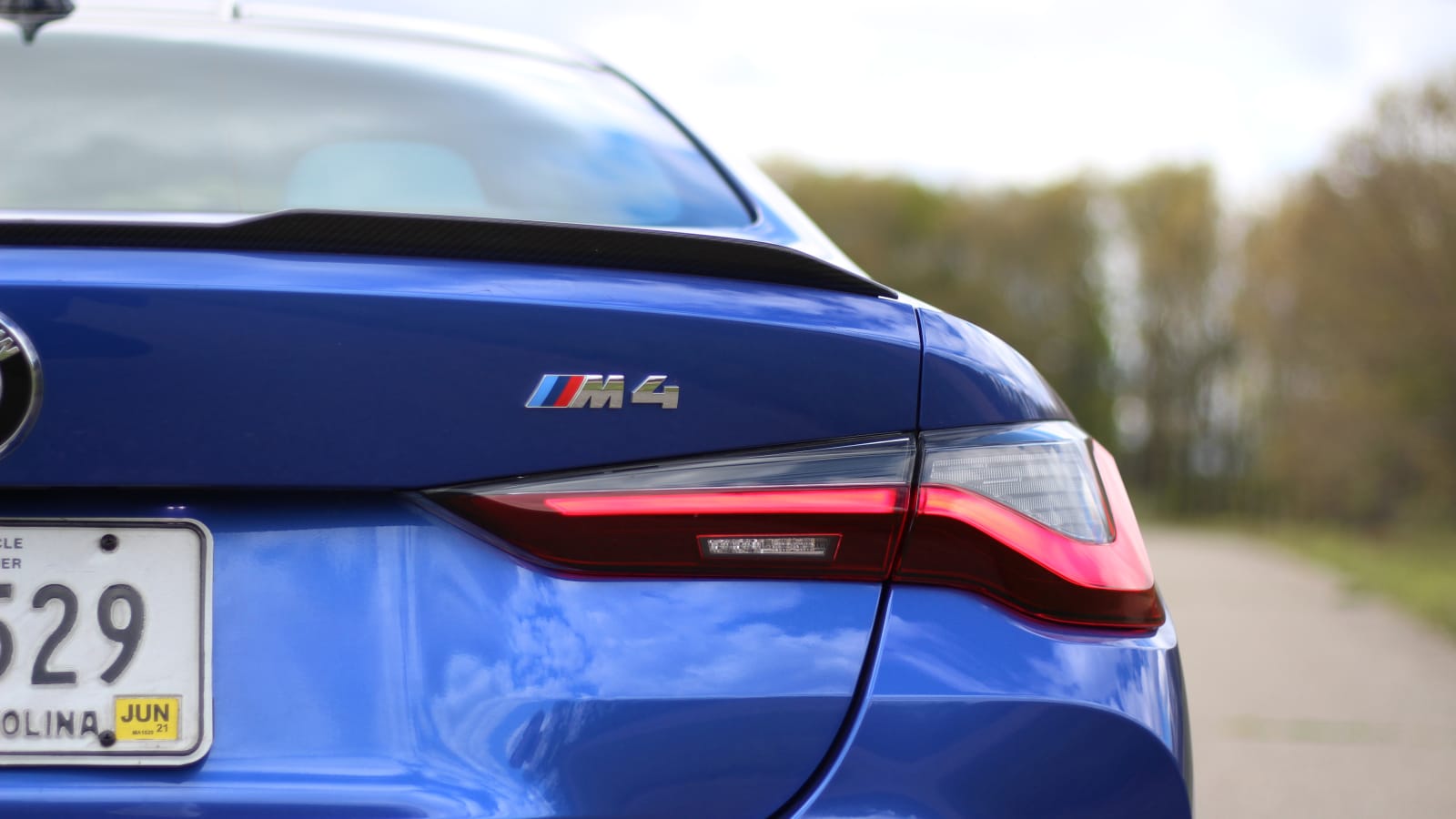 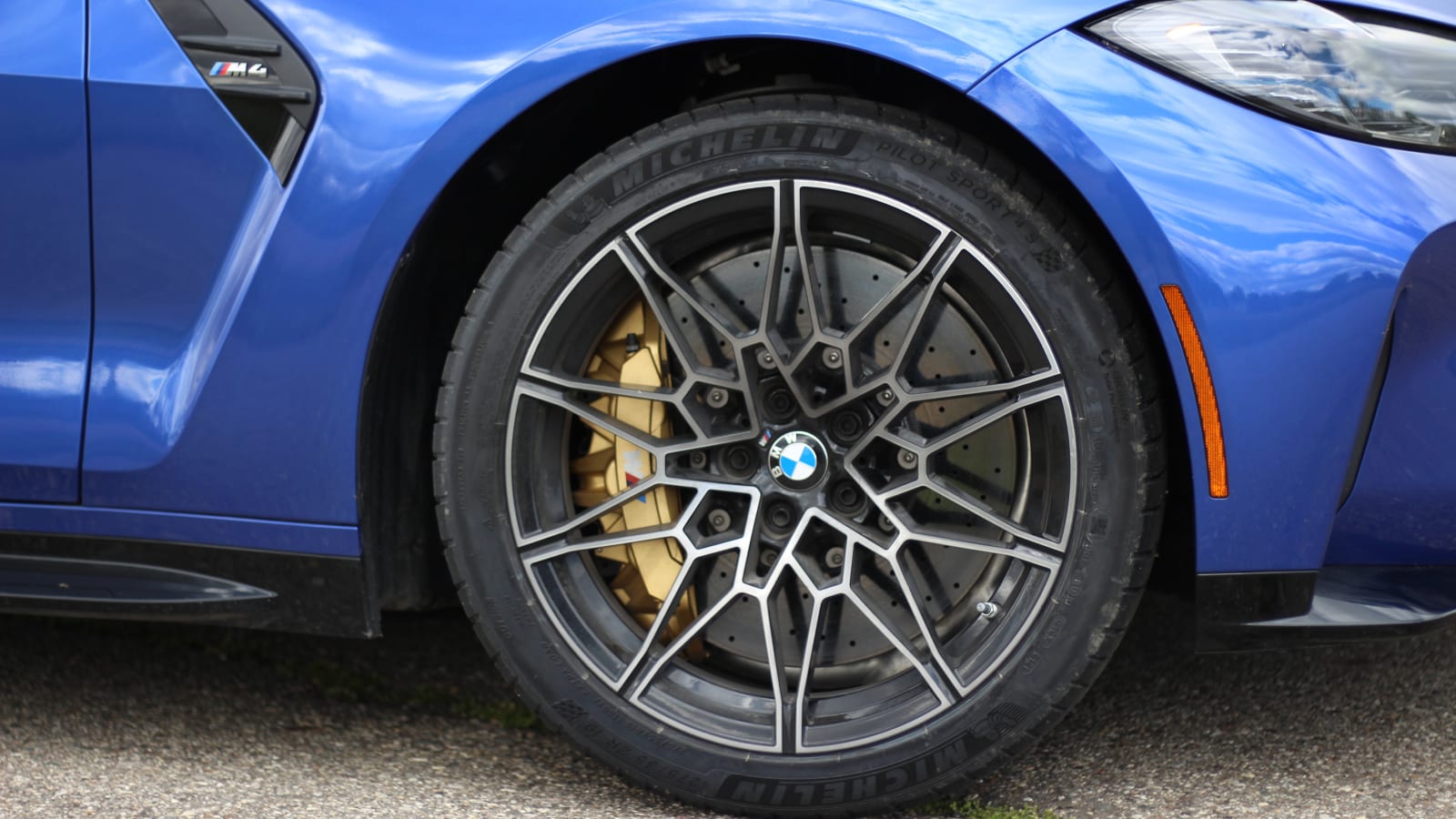 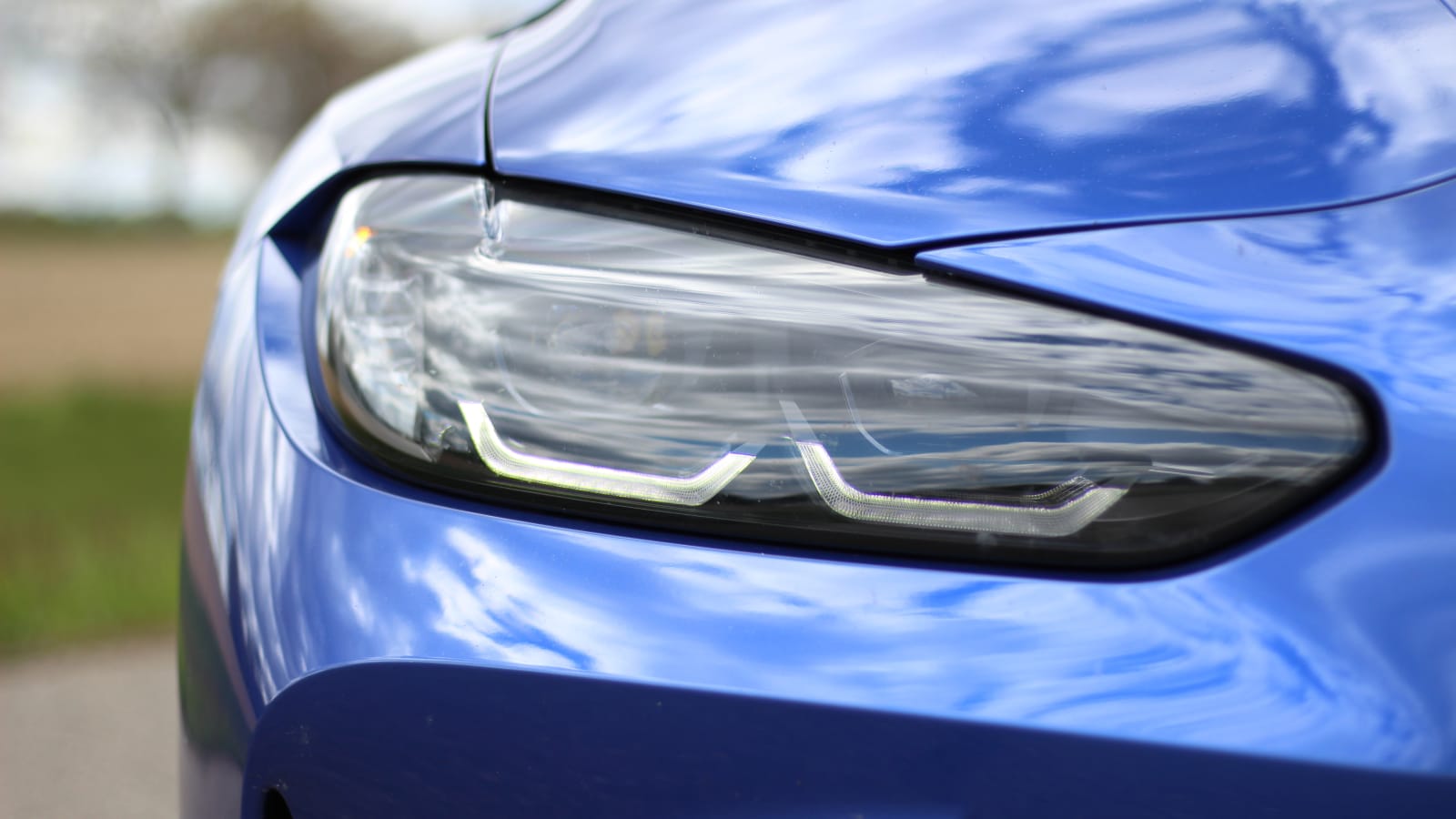 The sensation of acceleration is what’s different with this engine. Sure, the forged crankshaft, wire-arc-sprayed cylinder liners and track-capable cooling system are cool, but what’s really neat is that BMW made a boosted engine that behaves more like a naturally aspirated one. The outgoing engine (codenamed S55) hit peak torque at only 1,850 revs, but started to trail off after 5,500 rpm. This S58 finds peak torque at a loftier 2,650 rpm and holds onto it until 6,130. That makes the power more linear in delivery and the engine oodles more fun to wring out to the 7,200-rpm redline, though you have to be willing to work a little more off-idle. The sound it makes is lacking in musicality, unfortunately — we expect better from a sweet, smooth inline-six — a problem carried over from the outgoing engine.

Being able to shift for yourself makes this engine all the more fun to play with and the car as a whole far more engaging than any automatic could ever be. The manual transmission is unchanged from the previous car — it even has the same ratios. First is gone in a flash and full of wheel spin. The M4 delightfully shakes its tail like an excited dog if you nail the shift into second just right, and then you’re seriously off to the races in third. That linear power band is a never-ending treat, as the buildup of power with revs is as natural as it gets for a boosted engine.

All that extra weight the M4 is carrying around is cleverly disguised. The car has a light, airy way for how it goes about attacking corners — it’s tossable enough that if you told us the car weighed less than 3,500 pounds, we’d believe it. The way you sink into the heavily bolstered optional carbon fiber–backed buckets helps you stay in place. Seats like these truly do enhance the driving experience, as you sit closer to the ground and can completely focus on driving without having to brace yourself in a sharp corner.

The damping is finally just right, too. Where the previous M3/M4 was washboard-stiff, this car naturally follows and smooths the road’s ups and downs, maintaining total control of its four contact patches. BMW says the Sport setting for the electronically-controlled shock absorbers was specifically designed for imperfect pavement (like the Nürburgring), and it’s damn-near perfect for any regular roads you’re likely come across. There’s more compliance and forgiveness in the M4’s chassis than other M cars, even the crossovers. This car is unquestionably dialed-in for maximum driver enjoyment no matter the road surface, and the Sport Plus setting stiffens things up sufficiently for track use. 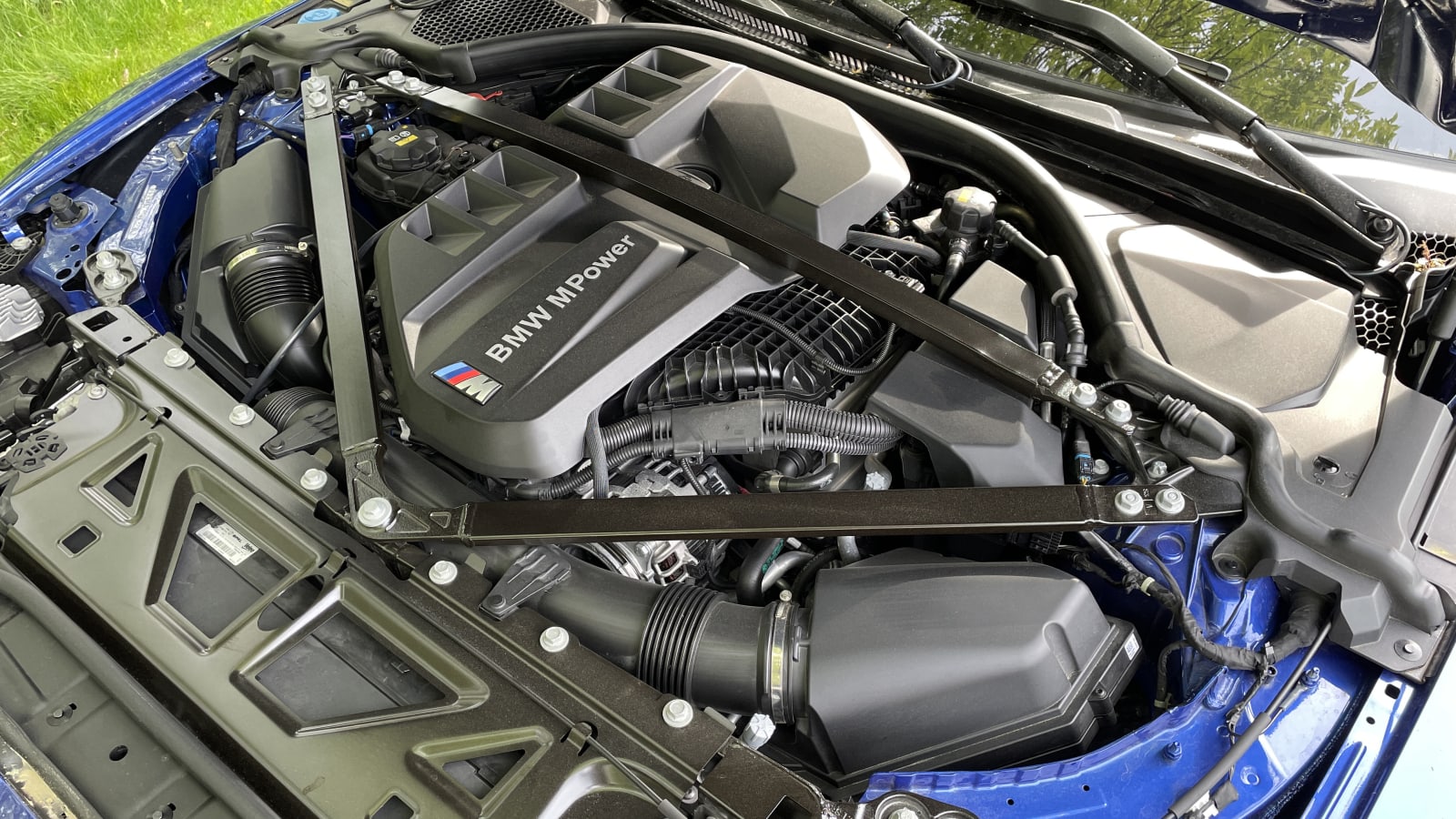 It’s easy to get into a groove driving the M4. The acceleration is right in that sweet spot of not being overwhelming on the street, but still enough to audibly elicit wows when you do uncork it. The manual gearbox isn’t going to win any prizes for most engaging or most satisfying to use, but it sure does beat tapping paddles. And the Active M Differential can be felt working, gently accelerating you around corners with a wag of the tail, never getting in the way, but still helping out with strategic torque distribution.

The M Dynamic mode for traction control and stability control is arguably the best in existence for allowing just the right amount of slip but keeping things within reasonable limits. BMW even copied AMG here by letting you select from 10 stages of “permitted wheel slip,” enabling a driver to gradually get braver on the race track. There’s even an M Drift Analyzer that will give you a 0–5-star rating on any drift you should attempt on a track. This symphony of mechanical and electronic bits underneath you is tuned just how we like, and you can drive without being annoyed by any of it. It’s one of those cars that you find yourself laughing out loud after a rip down your favorite road. BMW earns an A+ for fun.

Now to the dreaded steering discussion. If every manufacturer that used electric power steering could just copy whatever the hell Porsche does, that’d be great. Unfortunately, BMW is still off base here. The M4 undoubtedly has the most accurate and enjoyable steering of any recent BMW, but it’s still far from exemplary. There’s a feedback and weighting disconnect. For example, we’d find ourselves deeply confused about the weighting mid-corner with the suspension fully loaded-up — why’s this so unnaturally light? we’d think. Others have proven that you can make electric power steering feel natural, but BMW hasn’t found the secret ingredients yet. 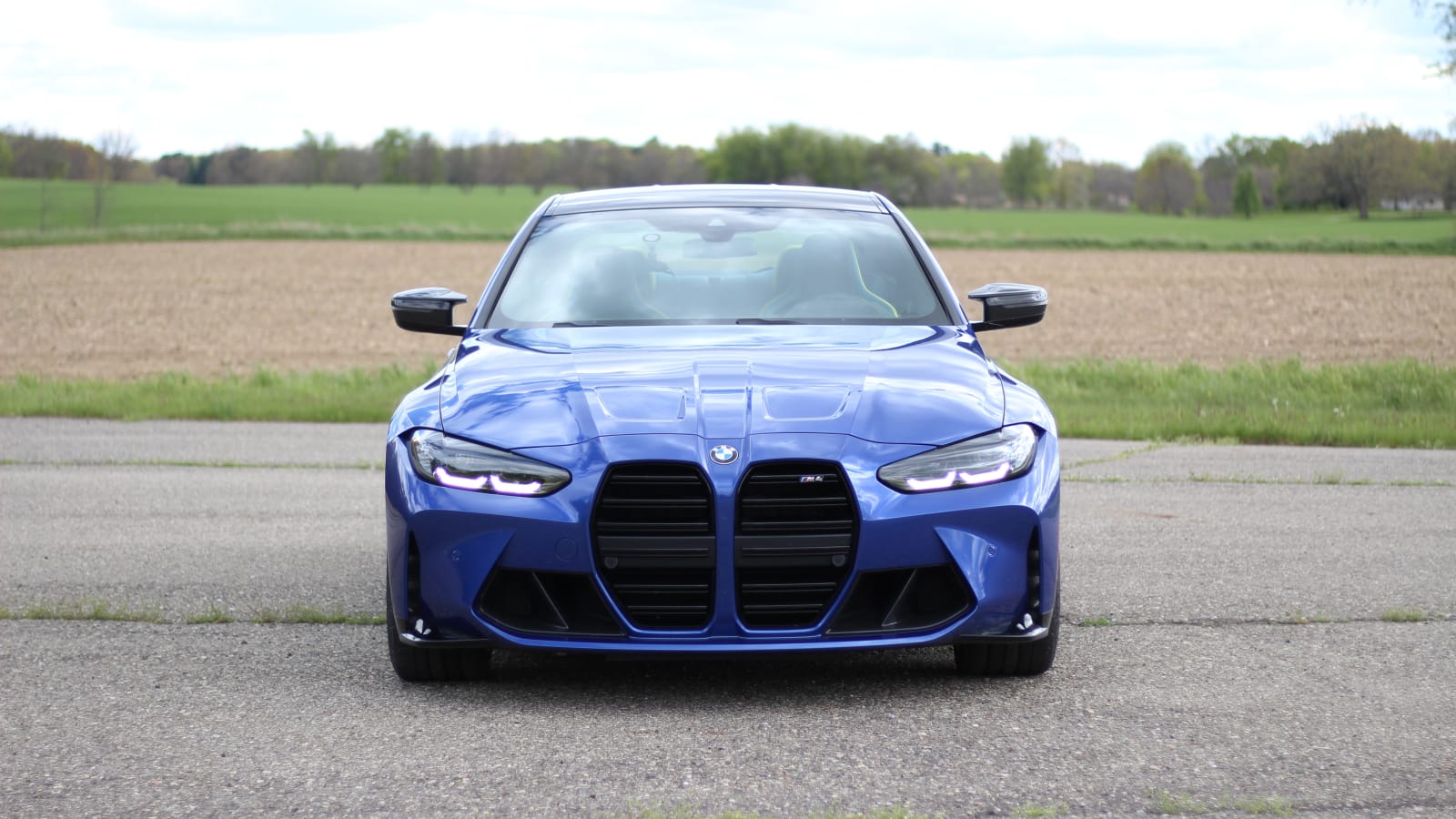 The steering is the only big complaint about the execution of modern electronics in the M4, though. BMW’s brake-by-wire system (with Comfort and Sport modes for different pedal feel) is wonderfully done and works well with the optional carbon ceramic brakes. The “Shift Assistant” matches revs on downshifts with perfectly-timed, smooth blips, though it’s still easy and super satisfying to handle that task yourself. And BMW’s M1 and M2 custom mode buttons continue to be a godsend for quickly switching between favorite combinations of the numerous settings. Set everything to maximum comfort, and you’ll trundle along with a relatively quiet exhaust, comfy ride and a start/stop system to save fuel.

Yes, it is strange to have the engine cutout in a manual when you’re sitting at a light in neutral. Even weirder are the digital gauges combined with a manual transmission. Watching a digital needle climb up a digital tachometer just doesn’t have the same gravitas or provide the same satisfaction as an analog tachometer does. (Which explains why Porsche keeps the analog tachometer around.) If BMW’s M Mode digital cluster display were better, that might help, but as it stands, the vertical tach here is mega difficult to read close to redline. It’s hard to understand why BMW designed a tach that is spread out in the low-to-mid range but squished up top. It’s a good thing the digital shift lights are so good — we found ourselves following those more than actually looking at the tiny tachometer. 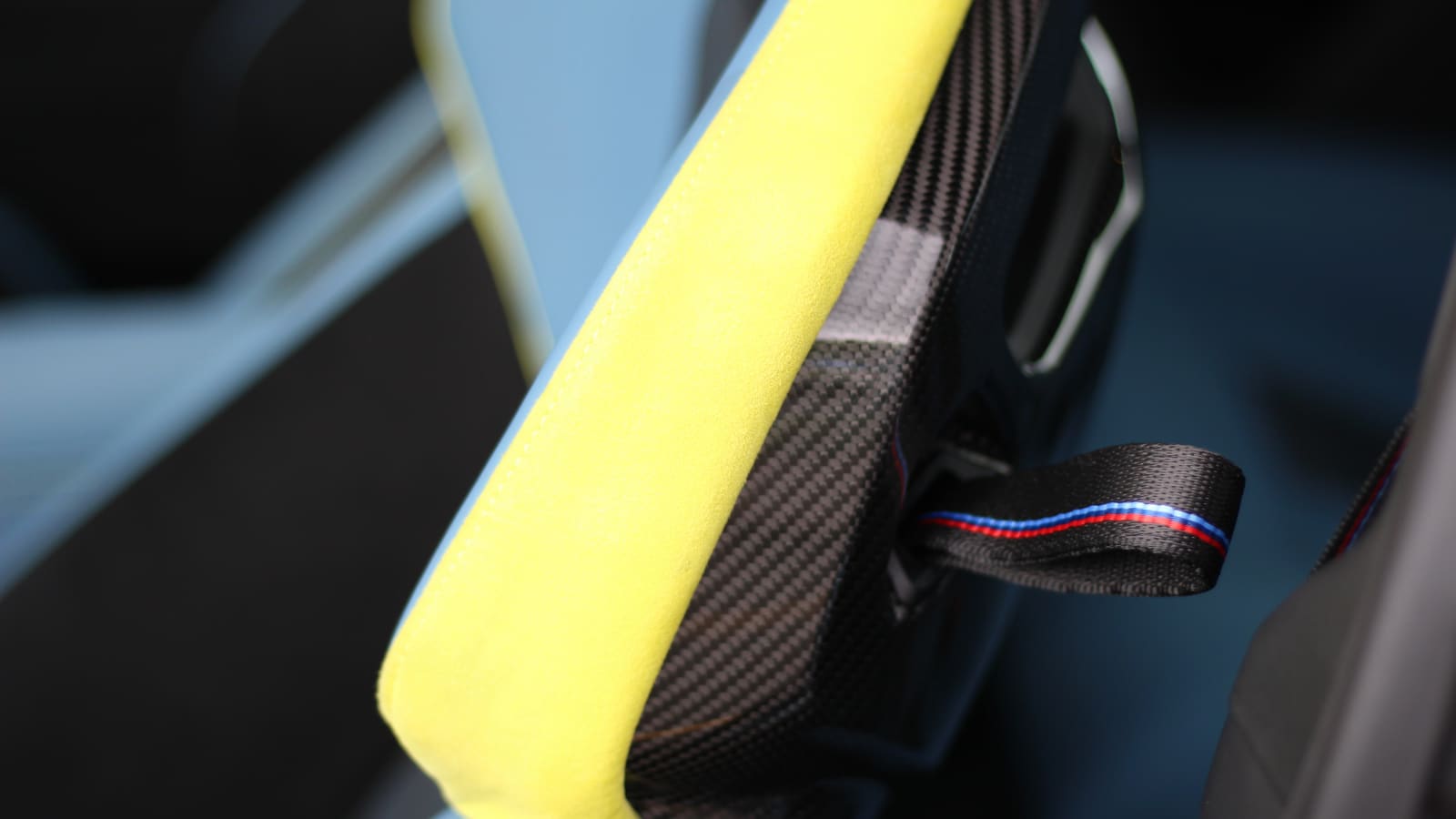 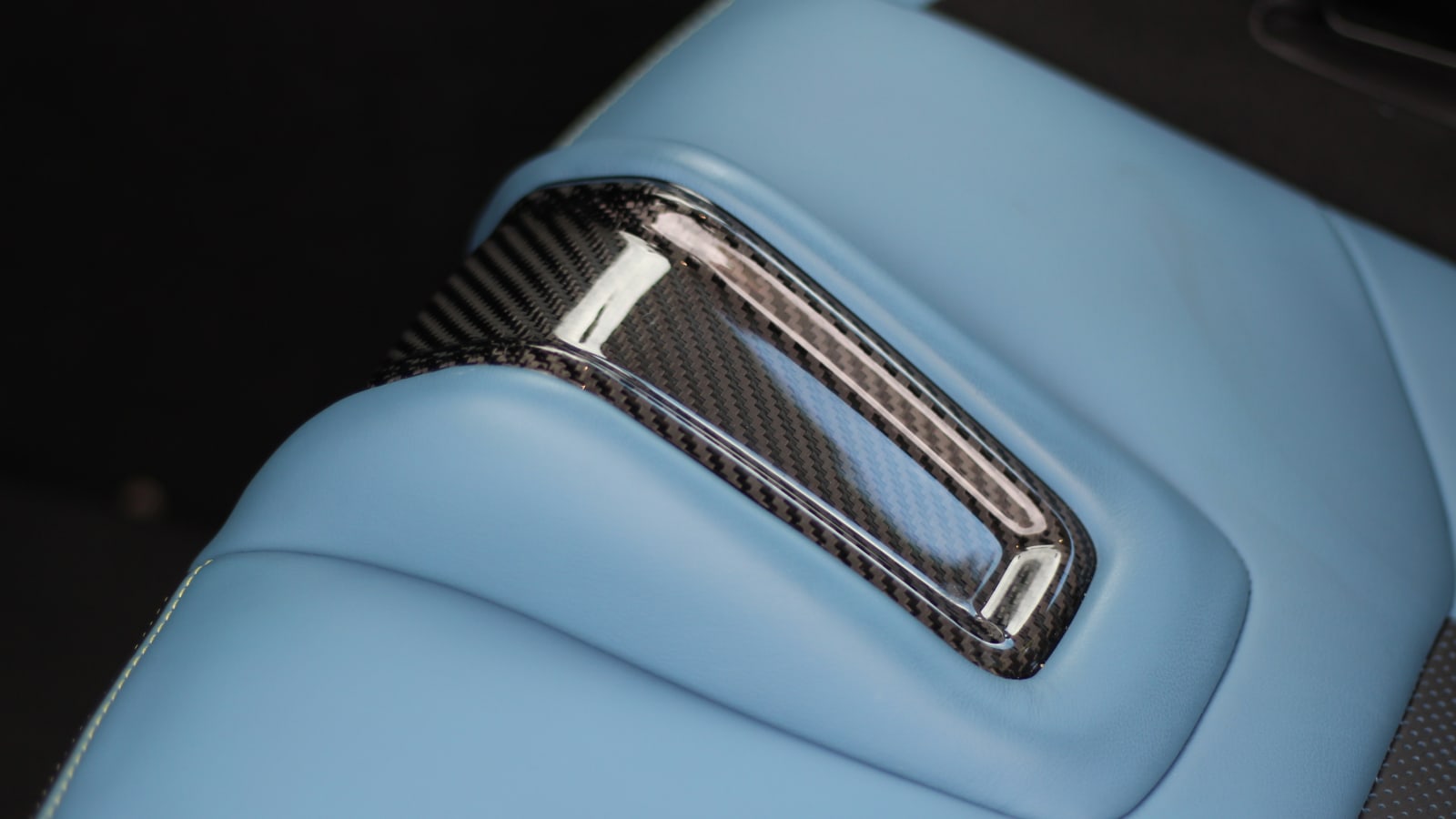 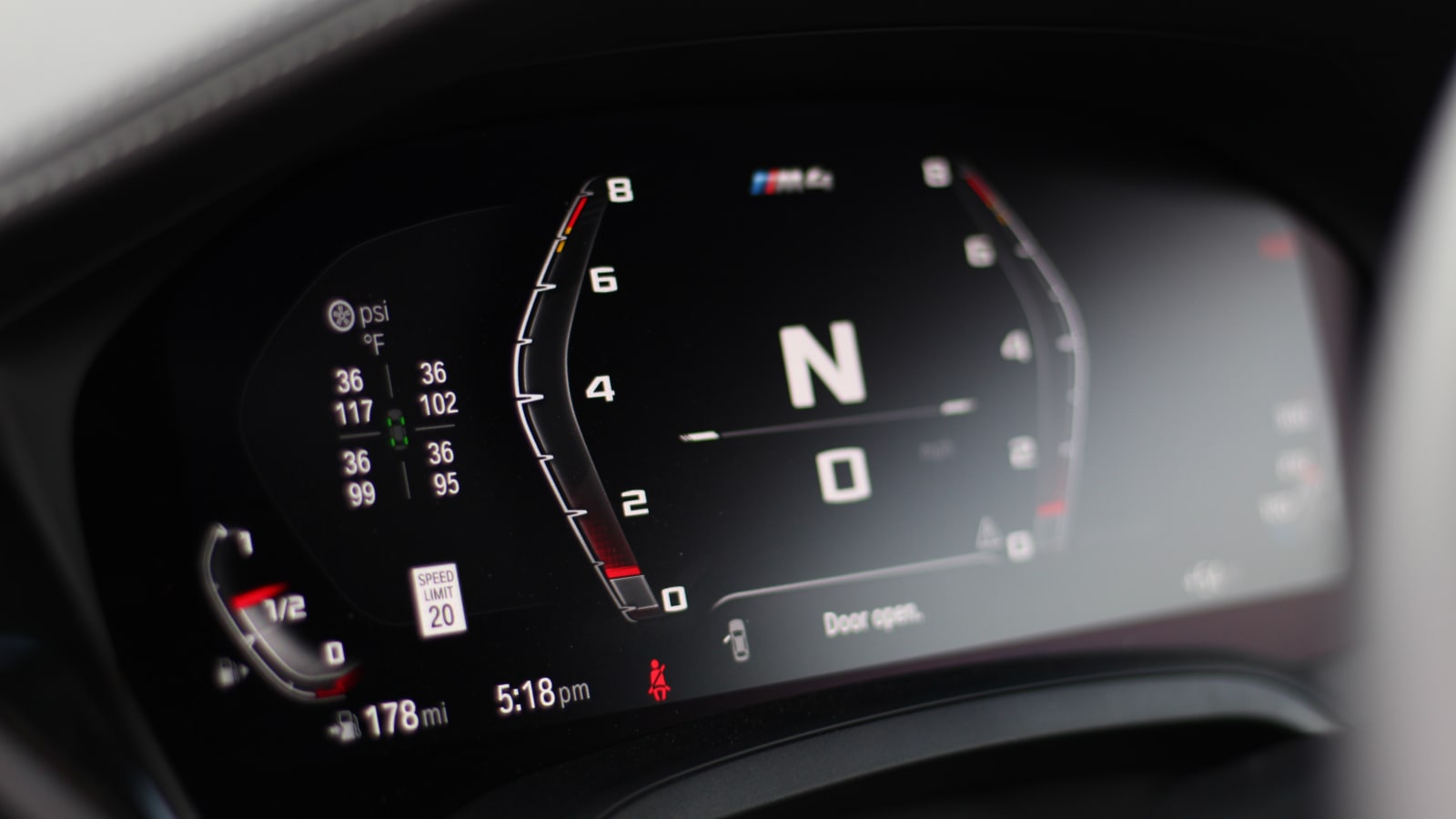 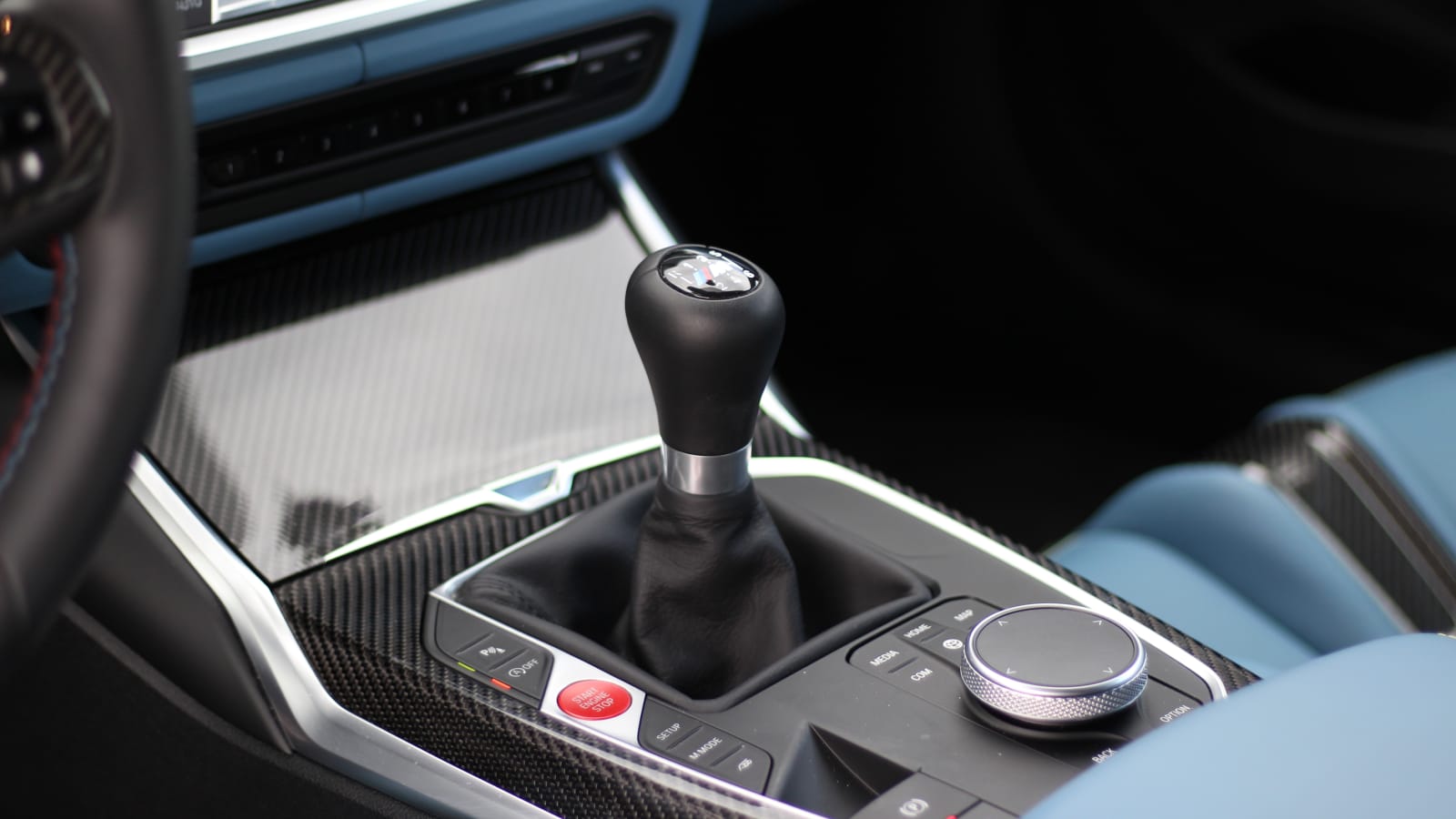 The rest of the interior is a big win, especially if you option the M Carbon Bucket Seats and the Yas Marina Blue and Yellow-accented leather option on our test car. Just like the rest of the 4 Series lineup, the new M4 has super-usable back seats. The big A-pillars do get annoying in traffic, but poor visibility comes standard on the majority of cars these days. All of the drive mode selections are relegated to a single button that pulls up a mode-selection screen on the central display, but BMW still left us a hard button to toggle the adjustable exhaust back and forth at a moment’s notice.

At a starting price of $72,795, the M4 is a sensibly priced sports coupe that undercuts its German competitors’ base prices. Our $93,795 test car is a far more questionable value, but you can easily lop off $8,150 for the carbon ceramic brakes and $2,500 for the exterior carbon fiber trim. Those seats, though — they’re worth every penny of the $3,800 ask.

And don’t let the exterior design hold you back from considering the M4. The kidneys are much better in person, and the aftermarket will surely love to sell you an expensive alternative grille if you really hate them that much. What’s really important is the “M” badge on the back, and the fact that it’s properly earned.

Auto Experthttps://automobiledot.com
As an Editor and an Automobile Geek, it's my pleasure to share my knowledge about Automobiles and their various aspects that can impact our lives.
Previous articleStellantis CEO samples Maserati Grecale crossover due in 2021
Next articleMaserati gives us our best look yet at its Grecale small crossover