There’s an all-new Tucson coming for 2022, but this is not about that bold, sharply creased crossover. Nope, this covers the 2021 Hyundai Tucson, which carries over unchanged into the last year of a six-year generation. As always, it’s a well-executed if forgettable compact crossover that delivers strong value. You get lots of equipment for your money, a lengthy warranty and easy-to-use technology. Its interior design has also aged quite well despite imminently facing the sunset.

There are issues, however, that go beyond the simple fact that a multitude of newer, more impressive competitors have debuted in the past six years. It’s an unusual size, for one. It’s either one of the smallest compact crossovers (Toyota RAV4, Honda CR-V, etc.), or the biggest among a growing number of “in-betweener” choices (Mazda CX-30, Kia Seltos, etc.). Perhaps that’s not such a bad thing, but its fuel economy is indisputably an issue as its 23 mpg combined with all-wheel drive falls between 3 and 6 mpg below crossovers in either of the above size categories. There’s also the matter of the Tucson being comparatively mundane to drive. In other words, we’d wait to see what next year brings (or just get something else).

The Tucson gets some new colors for ’21. 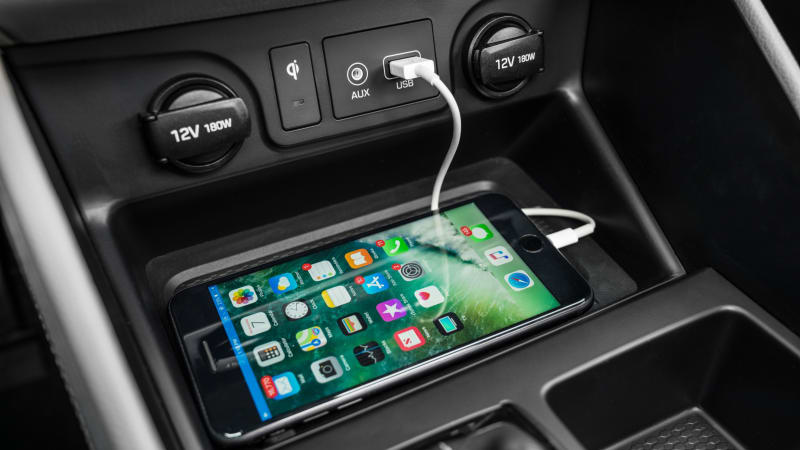 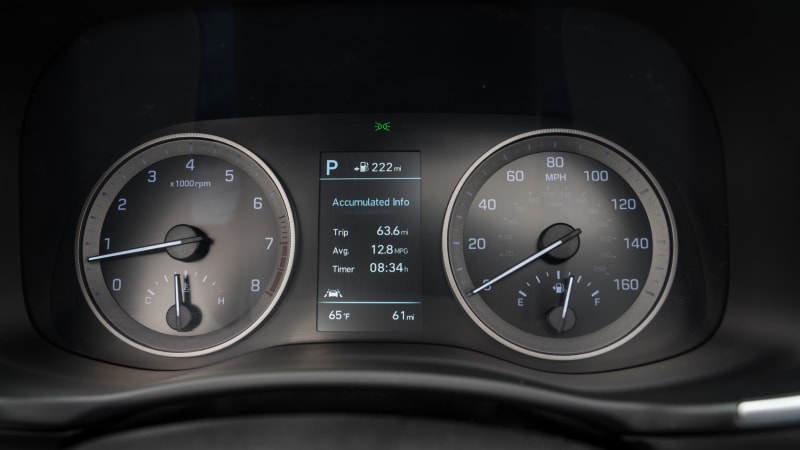 The interior’s design and layout are attractive and functional, though there’s little to differentiate the uppermost “Ultimate” trim level from the others. Though similar in appearance to the bigger, pricier Santa Fe, there are more poor-quality plastics littered about. At least Hyundai makes sure that the pieces you most frequently touch are nicely textured and/or soft.

As all modern Hyundai infotainment systems go, this one is easy to use and relatively simple, but it isn’t the prettiest to look at. Both Android Auto and Apple CarPlay are standard on the cheapest of Tucsons, because Hyundai makes its 7-inch touchscreen standard equipment. An 8-inch screen with navigation and upgraded audio system is added to the Limited and Ultimate trims. 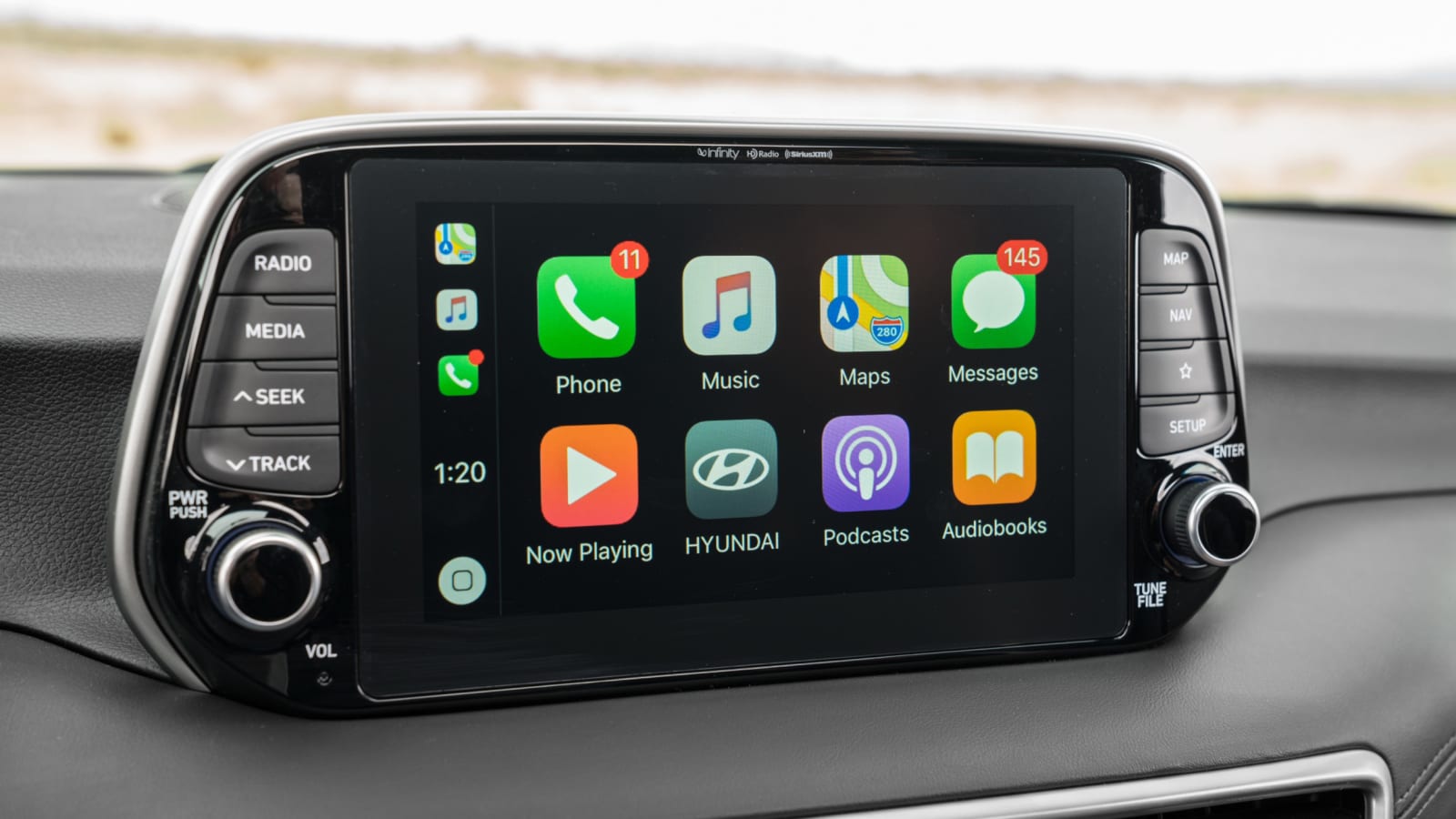 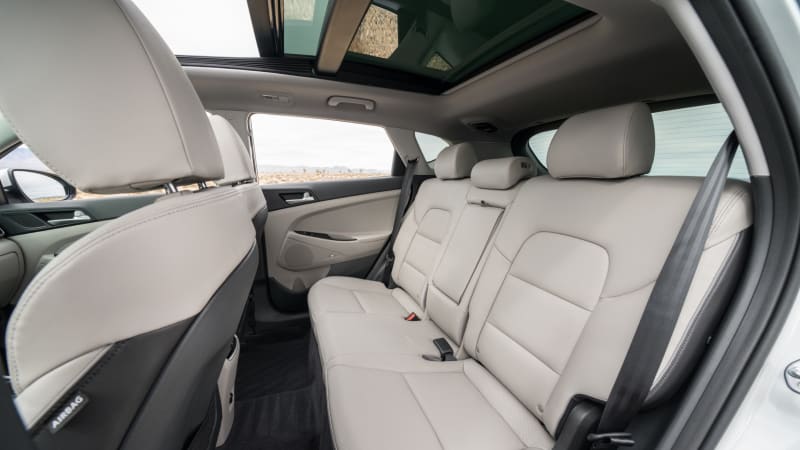 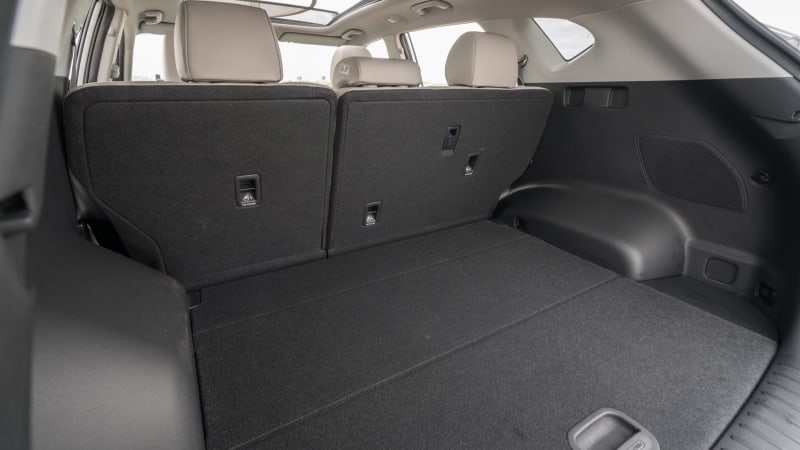 How big is the Tucson?

Slices of the crossover pie are getting awfully skinny. The Tucson has always been one of the smallest “compact” crossovers, with a shorter overall length (176.4 inches) and significantly less cargo space (31.0 cubic feet behind the back seat) than popular models like the Honda CR-V, Toyota RAV4 and Subaru Forester. Rear seat legroom is competitive with those, however. This meant it was a good match for those without kids who will happily sacrifice some family-friendly, stuff-hauling space for greater maneuverability. Today, however, there’s a growing number of “in-betweener” choices that are just a bit smaller, including the Mazda CX-30 and Kia Seltos. We’re honestly not sure if the Tucson’s size makes it an oddball or a Goldilocks choice for a select few.

Yes, take it up with Arizona. 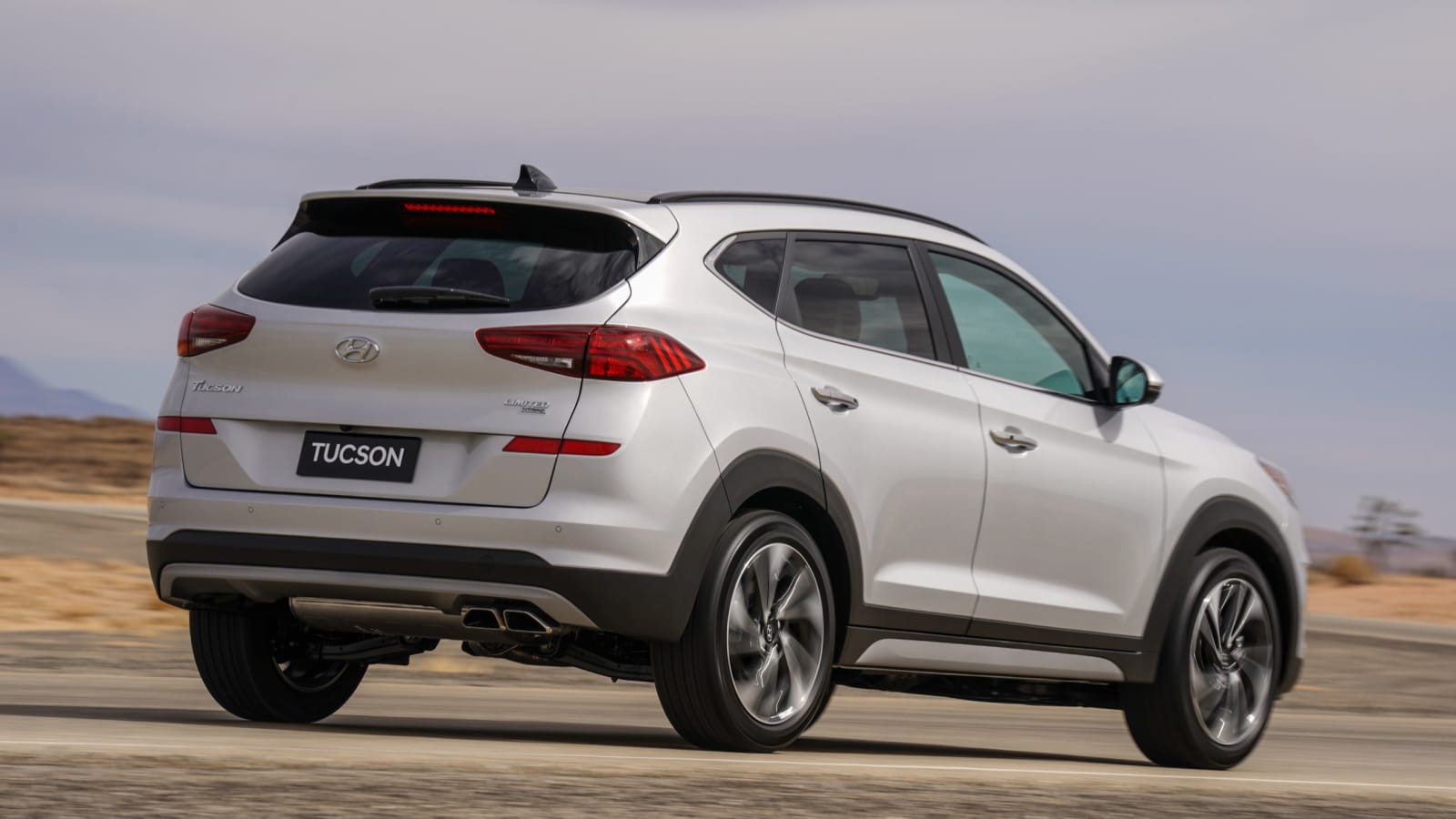 The Tucson SE and Value trim levels are powered by a 2.0-liter four-cylinder that makes 161 horsepower and 150 pound-feet of torque. A six-speed automatic and front-wheel drive are standard, while all-wheel drive is optional. EPA-estimated fuel economy is 23 mpg city, 28 mpg highway and 25 mpg combined with FWD, and 22/25/23 with AWD. Both are considerably worse than the best-selling compact SUVs.

All other trims get a 2.4-liter four-cylinder that makes 181 hp and 175 lb-ft of torque. It too has a six-speed automatic with the choice of standard FWD or optional AWD. Fuel economy is basically the same as the base engine at 22/28/25 with FWD and 21/26/23 with AWD.

The Hyundai Tucson is pretty forgettable to drive. Its handling is adequate, and while it’s not especially maneuverable at low speeds, it never feels big when winding through tight parking lots. The most we can recall about the steering was that it succeeded in turning the car, while the ride comfort and interior noise are similarly acceptable.

We’ve only driven a Tucson with the bigger four-cylinder engine and found the power to be on the lower side of adequate. The less powerful 2.0-liter will just feel even slower. We weren’t disappointed in the performance from the smooth and relatively responsive six-speed torque converter automatic. The front-driver has a tendency to torque steer at low speeds, which is just one more reason to opt for Hyundai’s smart HTRAC all-wheel-drive system that shunts more power than usual to the rear wheels for improved dry-weather handling (including for the usual poor-weather traction). You can also lock the system 50:50.

What more can I read about the Hyundai Tucson?

We could direct you to our past reviews of the current generation, but they’re so old at this point, that it’s better to just point you in the direction of our coverage of the upcoming all-new model.

The base price for each trim level is listed below, but we provide a full breakdown of features, specs and local pricing here on Autoblog. All-wheel drive can be had on any trim for $1,400. 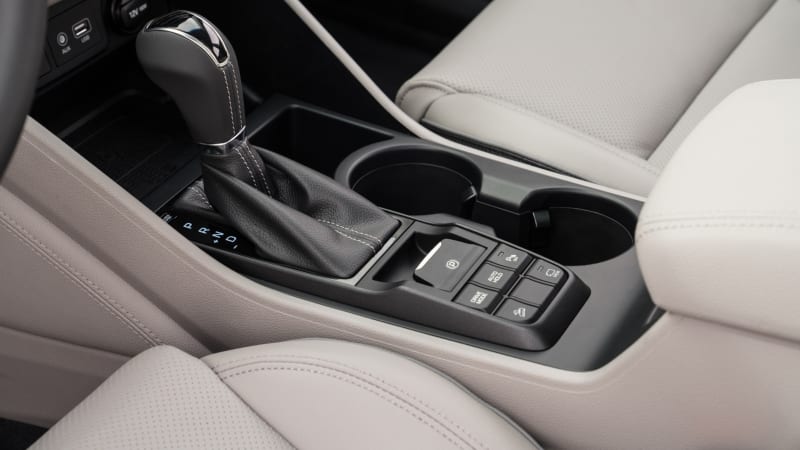 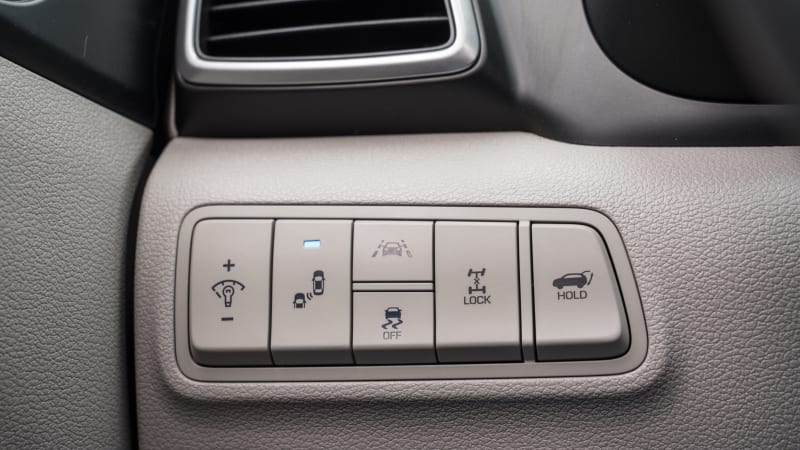 What are its safety equipment and crash ratings?

Every Tucson includes forward collision warning, automatic emergency braking, lane-keeping assist and a driver inattention warning system. Blind-spot and rear cross-traffic warning are included on all but the base trim, while the Ultimate trim adds pedestrian detection for the FCW system plus automatic high beams and adaptive cruise control with stop-and-go capability.

The Tucson got top five-star crash ratings from the National Highway Traffic Safety Administration in all categories but rollover where it got four stars (totally normal for an SUV). The Insurance Institute for Highway Safety named it a Top Safety Pick for 2020 due to its best-possible ratings in all crash categories as well as for its accident-avoidance technology. The halogen headlights found on the lowest three trim levels got a “Poor” rating, but the upgrade LEDs on upper trim levels got the best-possible “Good.”

Auto Experthttps://automobiledot.com
As an Editor and an Automobile Geek, it's my pleasure to share my knowledge about Automobiles and their various aspects that can impact our lives.
Previous article2021 MINI JCW GP Review covers everything
Next articleRedesigned 2022 Acura MDX to debut Dec. 8