Like the canyons and mountains through which it traverses, the Toyota 4Runner is timeless. Mechanically, this latest 2021 edition is pretty much the same truck that debuted 12 years ago – an eternity in car terms. On the one hand, that’s great: it has the same rugged truck-based chassis, capable suspension, ample clearances and bulletproof reliability that makes it a darling among off-roaders everywhere (and keeps its residual values sky-high). Its abundant interior space has also allowed it to be a realistic alternative to more family-friendly crossovers.

On the other hand, the 2021 Toyota 4Runner cannot escape the ravages of time. The carry-over engine produces less horsepower than a V6 Camry, the transmission has five (!) fewer gears than a Ford Explorer or Chevy Tahoe’s, the fuel economy is a truly dismal 17 mpg combined, and calling the handling “imprecise” would be an understatement. The interior is also closer to the antique end of scale, though substantial tech updates last year at least ushered it into this century.

These are all significant reasons to skip the 2021 4Runner in favor of any number of crossovers or perhaps one of the more civilized Jeep Wrangler variants (we’d suggest the new Ford Bronco, but it’s been delayed and there’s a waiting list anyway). Yet, there is another reason the 4Runner has stuck around so long with few changes: people love them. They’re chock-full of character, can go just about anywhere, are surprisingly practical and offer a diverse number of models to match your tastes. It won’t make sense for everyone and certainly requires some sacrifices, but the 4Runner’s appeal hasn’t eroded yet.

New, standard LED headlights should correct the 4Runner’s rather dim view forward. The TRD Pro trim gets new wheels and Fox Bypass shocks, while its signature color for 2021 becomes Lunar Rock green, replacing the oh-so-cool Army Green. On the upside, that becomes an option on the new Trail Edition. It’s basically an SR5 with dark TRD Off-Road wheels, a Yakima cargo basket, all-weather floor liners, the otherwise optional sliding cargo tray and a custom 40-quart cooler available in Army Green or Cement gray pictured above. Although it’s missing many common features like automatic headlights and climate control, we found the Trail Edition delivers the capability people expect from a 4Runner with the extra coolness they crave through its unique paint and accessories. It’s definitely a welcome addition for those who were really only attracted to the most expensive TRD Pro for its similarly distinctive aesthetics (it’s OK to admit it).

What are the 4Runner interior and in-car technology like?

After last year’s updates, the 4Runner cabin’s feature content and technology are reasonably consistent with what you might find in cars designed during this decade. That said, this remains an antiquated interior with its blocky design dating back more than 10 years. The plastics quality is also subpar for something that easily crests $40,000 and can top $50,000 – a RAV4 is nicer in some places. The various small bins and cubbies are also just a little too small for modern devices, having clearly been designed when we carried flip phones and iPods. There’s even old-school switchgear like the roller heated seat controls and one-blink-only turn signal. The SR5 and Trail Edition don’t even have automatic headlights or climate controls.

Nevertheless, it’s all put together quite well, controls are logically placed and there’s certainly something to be said for a rugged off-road vehicle that has a rugged interior. The standard 8-inch touchscreen is also of a typical size and has an acceptable amount of feature content, with standard Apple CarPlay, Android Auto and Amazon Alexa integration. Simple tasks like changing radio stations are generally easy to perform, but it’s not the quickest system nor the most modern in appearance. That’s a Toyota-wide issue, though, rather than a 4Runner-specific one. 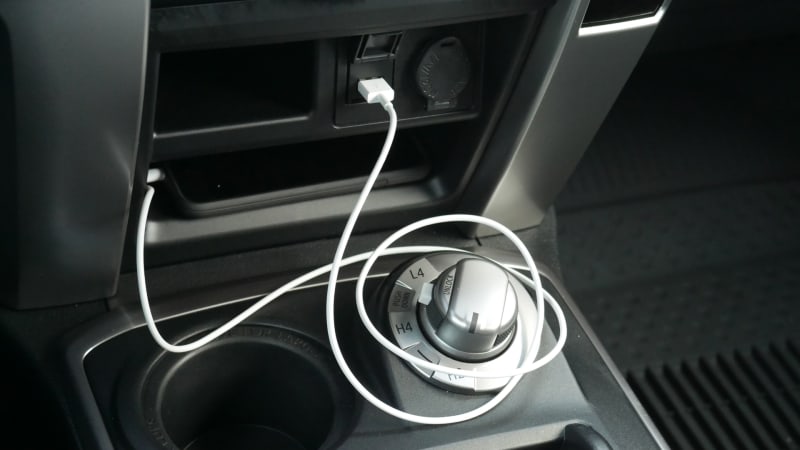 How big is the 4Runner?

Here is an area where the 4Runner is perfectly fine as-is. The cargo area floor is quite low for a truck-based SUV, while the space beyond is a big, boxy 47.2 cubic feet. Even when you add the novel slide-out cargo floor that reduces capacity, there’s still a gigantic amount of space. We know, we filled it up in our cargo area Luggage Test review. Maximum cargo capacity with the back seat lowered is 89.7 cubic feet, which rivals many three-row crossovers (the Highlander has only 84.3), and surpasses the Jeep Grand Cherokee (68.3) and Honda Passport (77.9).

There’s also the 4Runner-trademark power rear window that allows you to secure long items like surf boards or lumber out the back while keeping the rest of the liftgate closed. It also allows for freer airflow in the cabin, and dogs typically love it as well (that big boxy area in general is dog friendly).

Human legroom is quite good all around. The standard power driver seat offers plenty of adjustment, while the back seat is mounted at a nice height and reclines to an almost absurd degree. That said, headroom can be a bit tight up front should you opt for the sunroof. There’s a third-row seat available, but its space is extremely limited and it reduces cargo space. Really, if you want a third-row seat, crossovers like the Kia Telluride would be a better family-hauling choice. 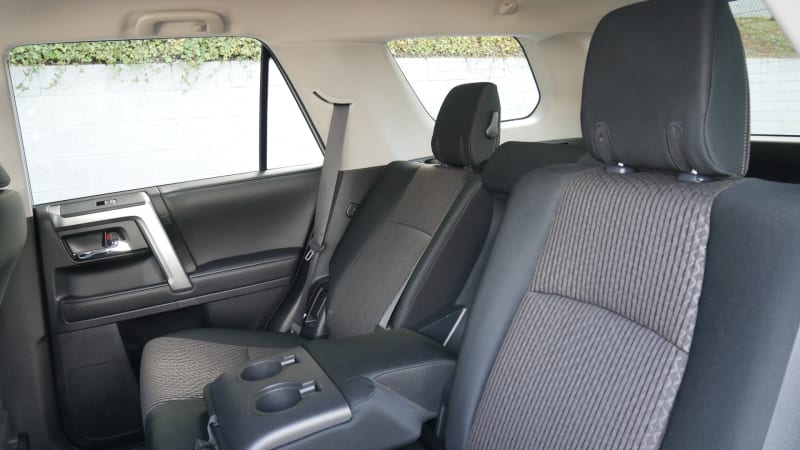 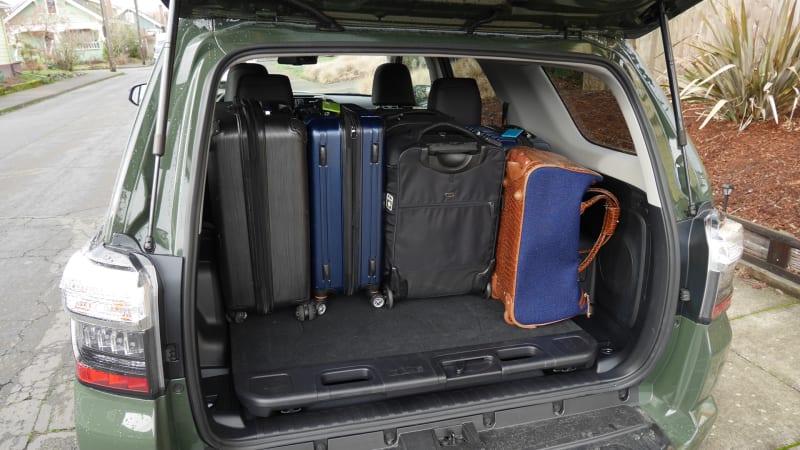 What are the 4Runner fuel economy, performance and towing specs?

The 4Runner is only offered with a 4.0-liter V6 that produces 270 horsepower and 278 pound-feet of torque. That’s not a lot given how much the 4Runner can weigh (especially the TRD Pro) and the fact that the lighter Toyota Highlander produces more than 300 horsepower. As such, the 4Runner is quite slow, and it’s not helped by a standard five-speed automatic transmission that does it no favors in terms of fuel economy.

According the EPA, the 4Runner returns 16 mpg city, 19 mpg highway and 17 mpg combined regardless of drivetrain, which is pretty bad given its weak-sauce power output. And it gets worse. The TRD Pro’s off-road tires, heavier weight and blunter aerodynamics resulted in us averaging only 17 mpg in about 250 miles of highway driving in a TRD Pro. We saw the low teens around town. By contrast, we were seeing 18 to 19 mpg on the highway in the Trail Edition, which might not seem like a big difference, but it is.

The optional four-wheel drive system provides high and low range. It is selected with a traditional mechanical shifter on TRD models and the Venture Edition, while the SR5 and Trail Edition utilize a knob that engages the same transfer case with a servo. Basically, it’s simpler to use and therefore friendlier for the less off-roading-versed owners more likely to buy those trim levels. The Limited also has the knob, but it controls a full-time four-wheel-drive system that includes a locking center differential.

Despite its rugged body-on-frame construction, every 4Runner’s towing capacity is only 5,000 pounds.

Terrible. And also awesome. It really depends on how you look at it. Should you compare the 4Runner to another midsize SUV like the Honda Passport, you’ll find this rugged Toyota to be slow and noisy, with ponderous handling that actually gets worse when you opt for a more off-road-oriented model (the all-terrain tires make the steering in particular sloppy and vague). On the other hand, should you compare it to a Jeep Wrangler or older truck-based SUVs, the 4Runner will be quiet, comfortable and handle surprisingly well. It’s shockingly civil for such a rugged vehicle, and indeed, actually much closer to the Passport than the Wrangler in terms of its on-road demeanor – especially its ride quality. At the same time, it’s much slower than both, with a transmission that does the engine no favors with its insufficient number of gears.

Off-road, the 4Runner is a monster, and you don’t have to get the top-of-the-line TRD Pro to realize its potential. Any 4×4 versions will do the job just fine, though the sweet spot is certainly the TRD Off-Road that goes beyond the SR5 and Trail Edition with a locking rear differential, wider tires, Toyota’s Multi-Terrain Select system, Crawl Control (essentially a low-speed cruise control for getting out of especially tricky off-road situations) and the optional KDSS disconnecting sway bars that improves both off-road wheel articulation and on-road handling. The latter actually aren’t available on the TRD Pro, which only ups the ante slightly with upgraded shocks and tires. Then again, both the Trail Edition and TRD Off-Road offer unique colors and equipment, which may ultimately sway the needle in their favor.

What other Toyota 4Runner reviews and comparisons can you read?

Suspension Deep Dive of the 4Runner TRD Off-Road with KDSS

Engineer Dan Edmunds takes you under the 4Runner for an in-depth look at how the TRD Off-Road and the KDSS suspension option does what it does. 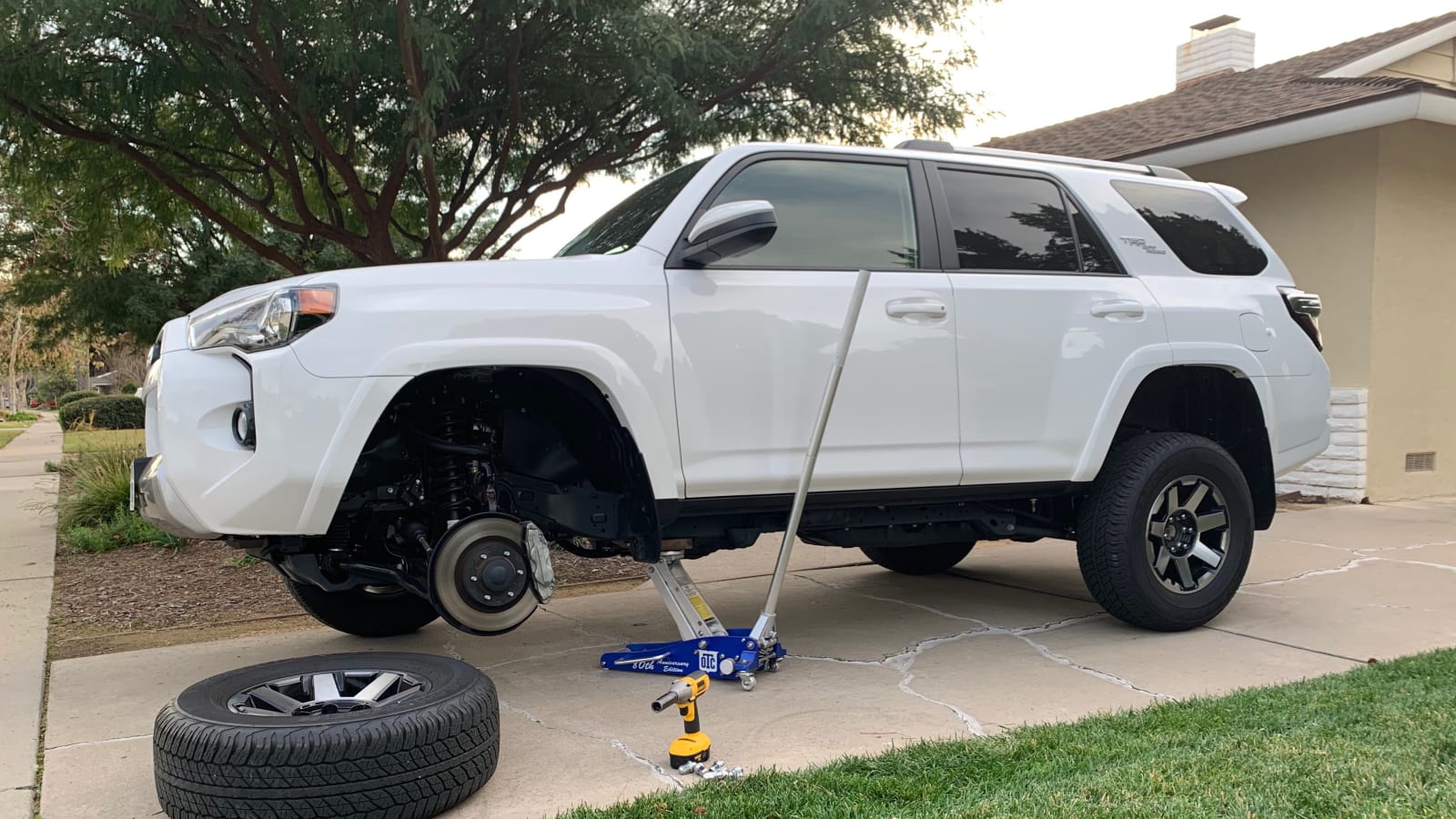 Here’s another deep dive of a different variety. We find out just how much you can stuff into the back of the 4Runner while also testing the optional pull-out cargo tray. 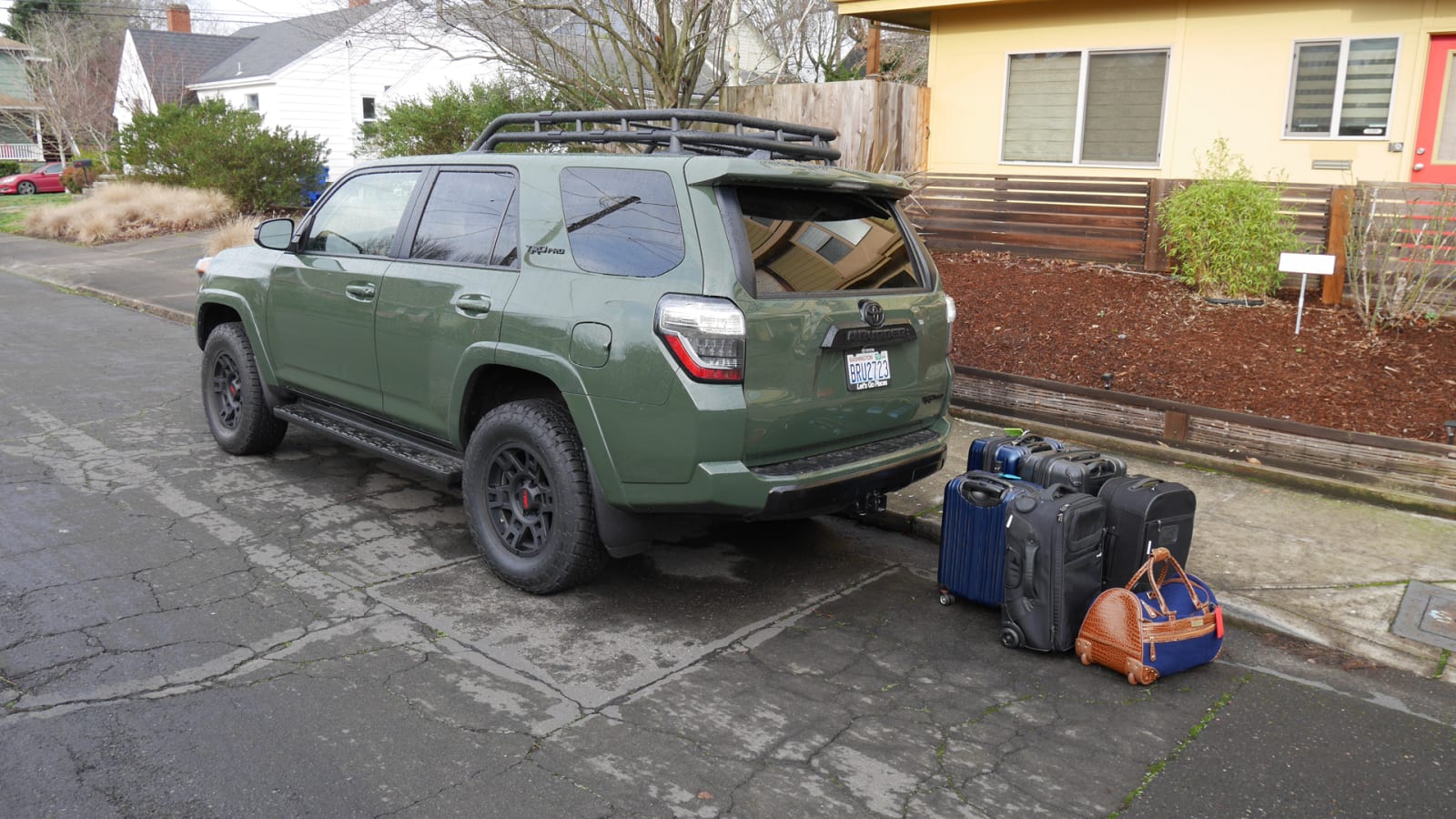 We broadly go over last year’s significant revisions after giving the 4Runner a thorough workout in Moab, Utah. 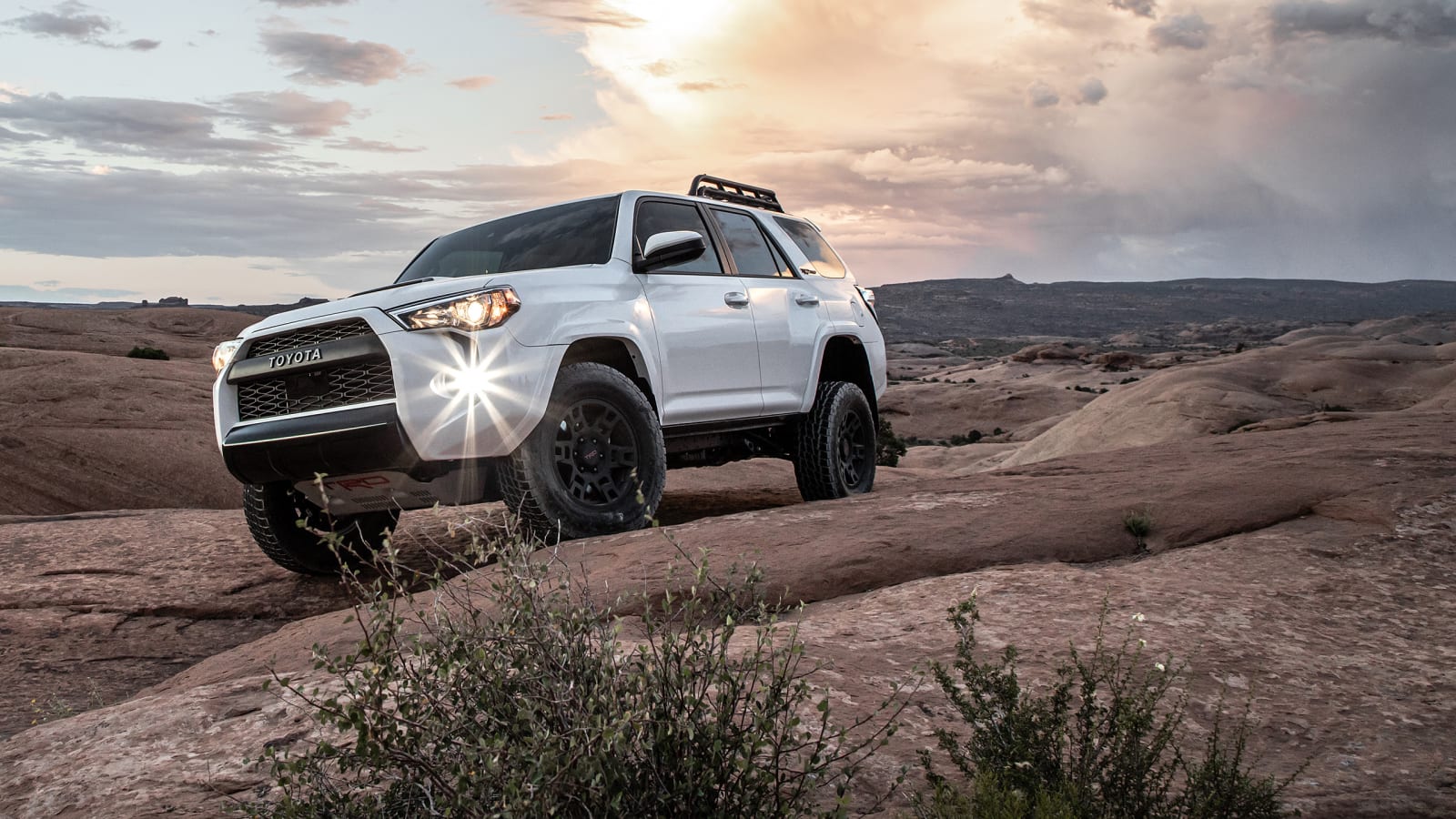 We test the TRD Off-Road Premium, which is pretty much the sweet spot in the lineup. 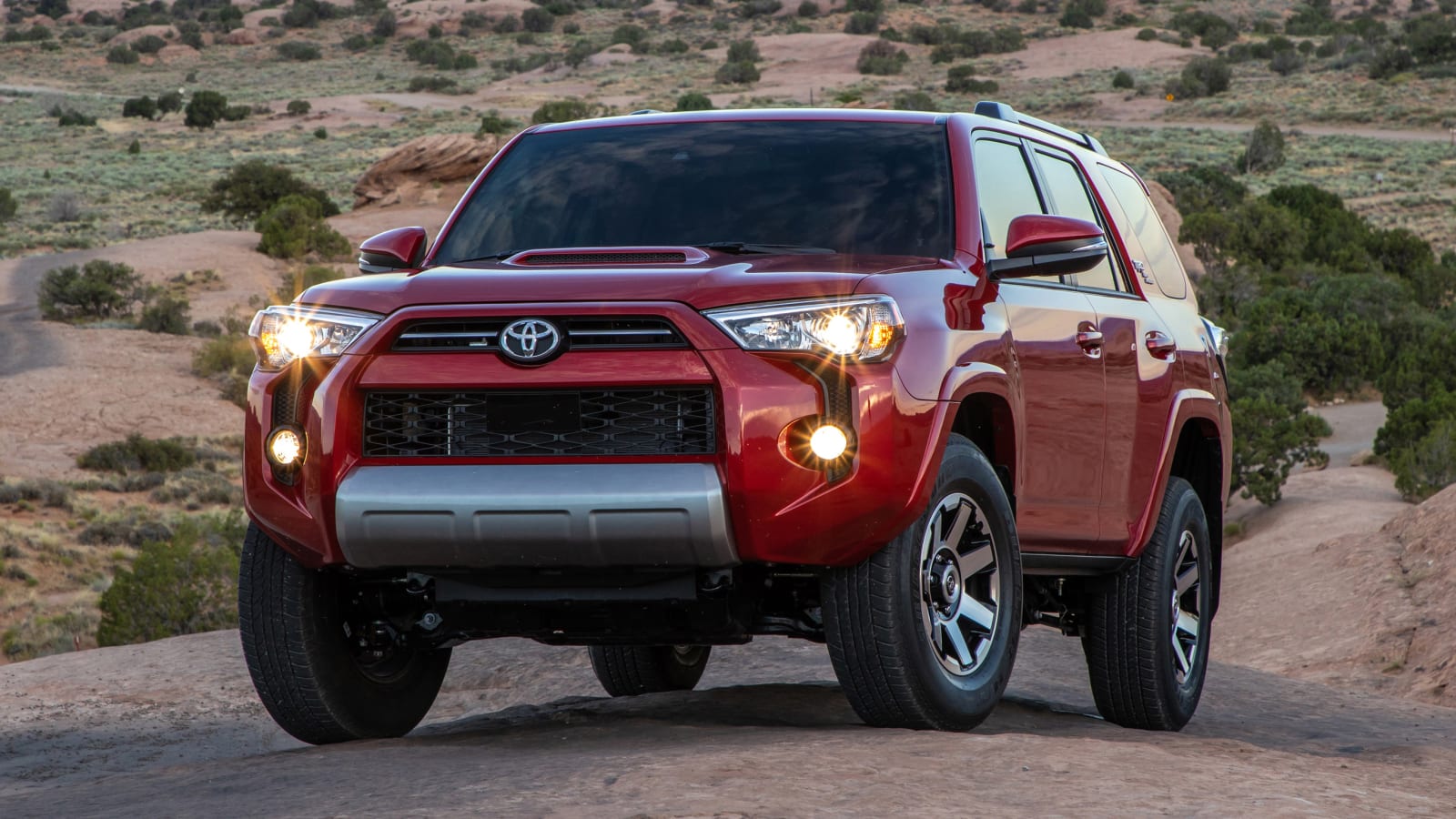 The Venture Edition basically takes the TRD Off-Road Premium and adds a Yakima MegaWarrior cargo basket (different than the Trail Edition’s). This is our only review of that trim level. 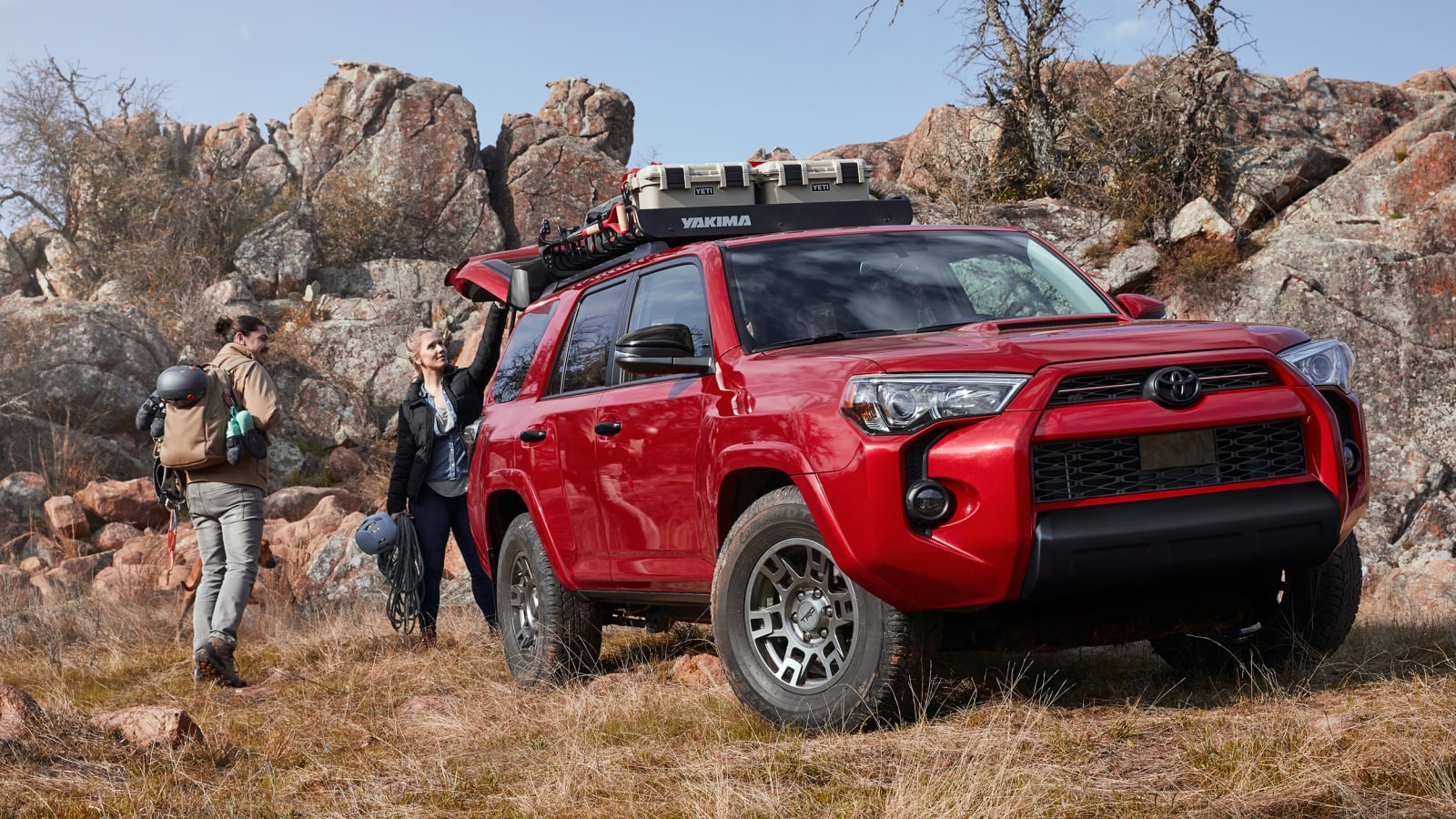 The new kid on the block takes on grandpa as we compare the dimensions and engine specs of the 4Runner with the all-new Ford Bronco. 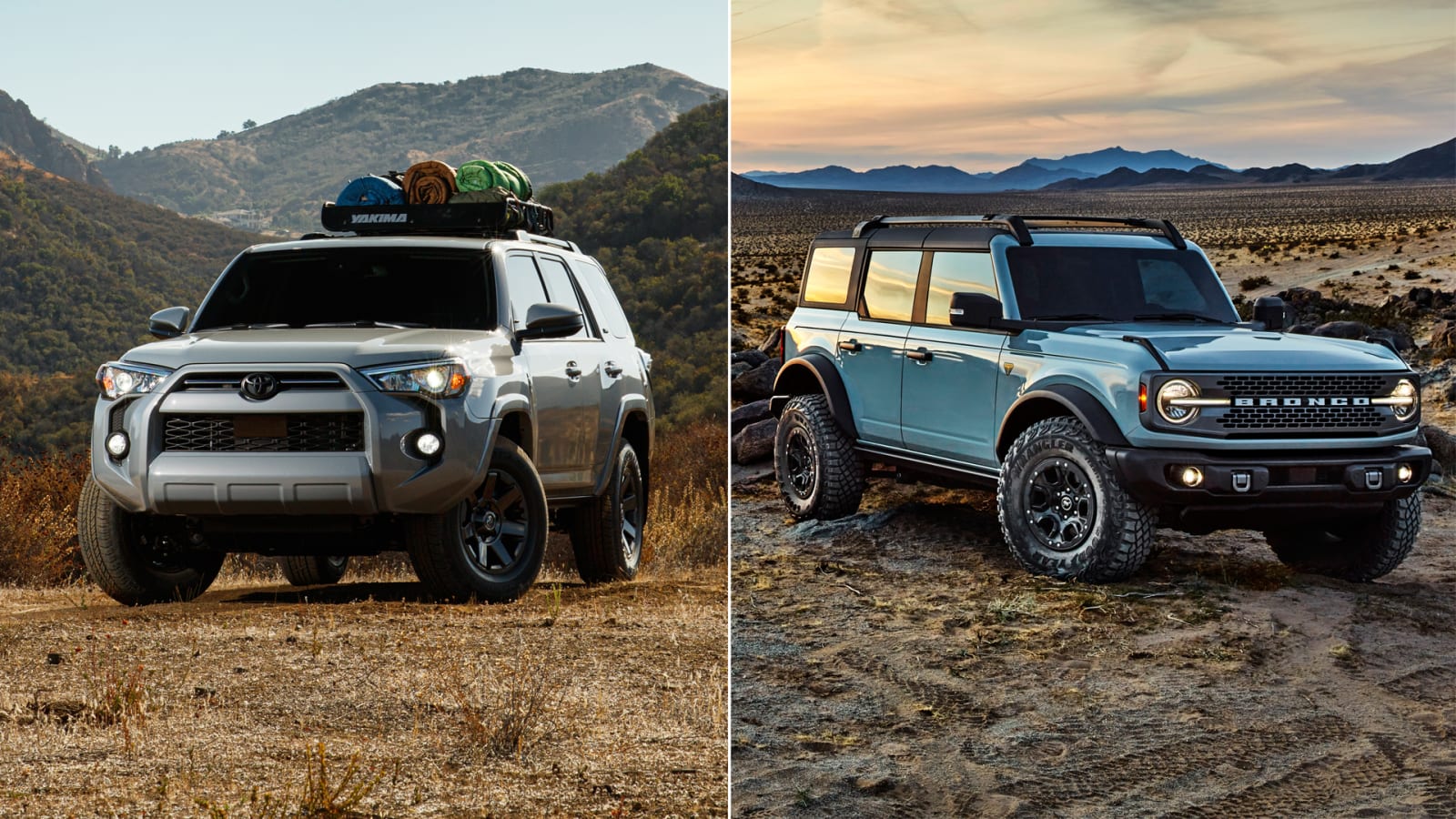 How much is the 2021 Toyota 4Runner price and what features are available? 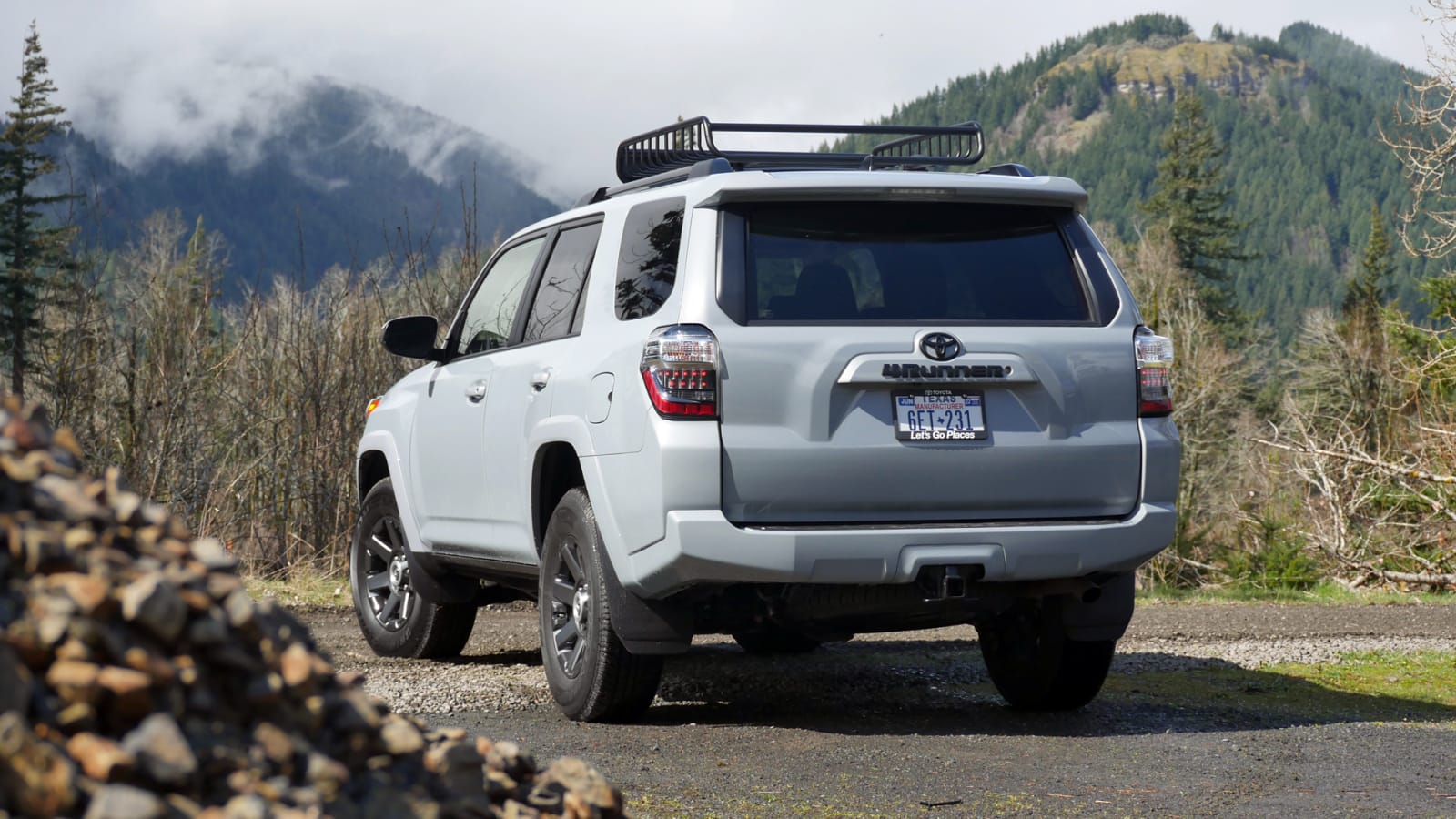 At this point, things diverge. The Limited ($46,570 4×2 or $48,605 4×4) and Nightshade ($47,985 4×2 or $50,020 4×4) are more luxury-oriented versions of the 4Runner that gain 20-inch wheels, a limited-slip center differential (4×4 models), the X-REAS “sport enhancement suspension,” fancier exterior trim (chrome on the Limited, black on the Nightshade), dual-zone auto climate control, leather upholstery, heated and ventilated front seats, a four-way power passenger seat, HD radio and a JBL sound system.

You can find a full breakdown of features, specs and local pricing here on Autoblog. 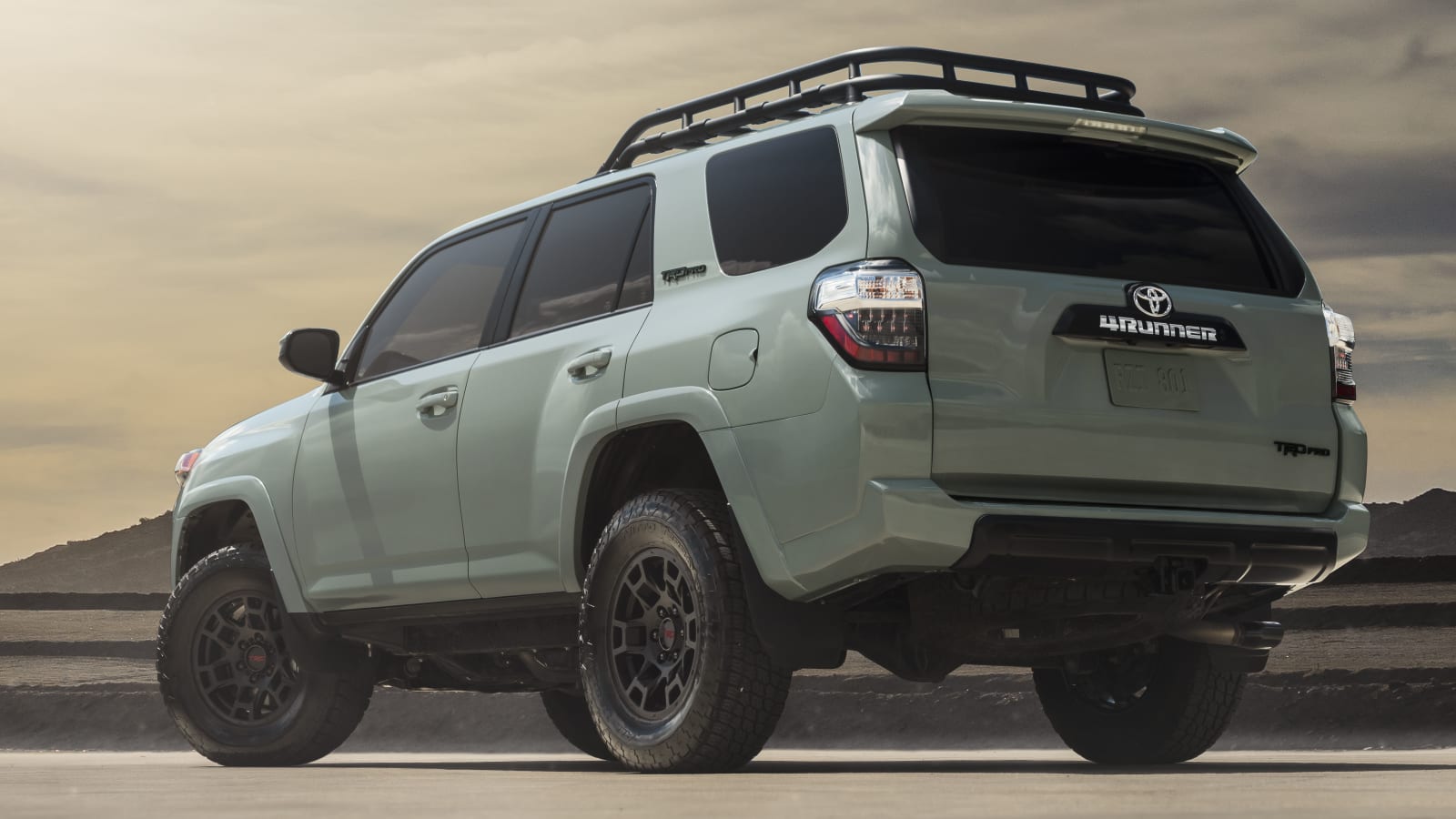 What are the 4Runner safety ratings and driver assistance features?

In government crash tests, the 4Runner received four out of five stars for overall and frontal crash protection, five stars for side protection and a three-star rollover rating. The Insurance Institute for Highway Safety gave it the best-possible rating of “Good” in all crash categories except the newest “small overlap front: driver side” category where it got a second-worst “Marginal.” This isn’t surprising given that the 4Runner was engineered long before this test was devise and manufacturers were obliged to design crash structures to accommodate it. The IIHS hasn’t updated its headlight rating yet for the ’21 4Runner and its newly standard LEDs. It previously got a “Poor” rating making the change not especially surprising.

Auto Experthttps://automobiledot.com
As an Editor and an Automobile Geek, it's my pleasure to share my knowledge about Automobiles and their various aspects that can impact our lives.
Previous articleNissan gives the Armada’s overseas sibling the go-fast Nismo treatment
Next articleBMW, Daimler bring partner BP in Digital Charging Solutions joint venture

The ongoing transformation of Hongqi into a preeminent luxury...
Read more
News