The 2021 Volvo XC60 may not be the first car to spring to mind when considering European luxury crossovers, but despite lacking the cachet of tier-one manufacturers, it is a solid, safety-first offering with attractive styling and excellent interior design, rising above the mainstream market and rivaling some of the continent’s best.

The XC60’s cabin is uniquely Swedish: clean, modern and at its tastefully adorned best when done up in earth tones and natural wood trim. You won’t confuse it for something from Germany or Japan. Its seats are among the most comfortable and supportive of any luxury car under $100,000, and its Sensus infotainment system is capable and flexible.

No Volvo is perfect. Wheel size upgrades tend to disproportionately impact ride comfort, and Sensus can be slow to boot up and respond to inputs. Its powertrains are also lacking in refinement, with even the 400-horsepower plug-in hybrid model (Formerly the T8; now dubbed “Recharge”) lacks polish despite its robust performance. But the XC60 is nonetheless impressive, and thanks to its diverse array of powertrain options and versatile tech suite, this luxury crossover offers something for everybody.

For 2021, the XC60 is largely carry-over. Models with the T8 powertrain are now referred to as “Recharge,” which is Volvo’s new universal name for its plug-in hybrids. Keyless entry is now standard, along with illuminated door handles. 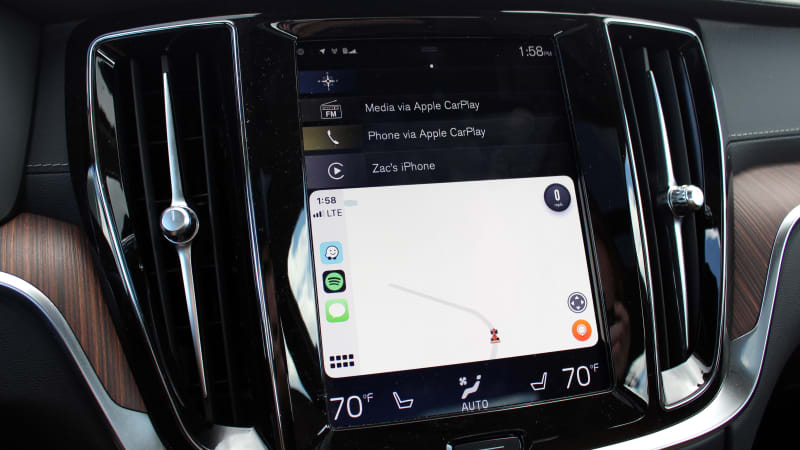 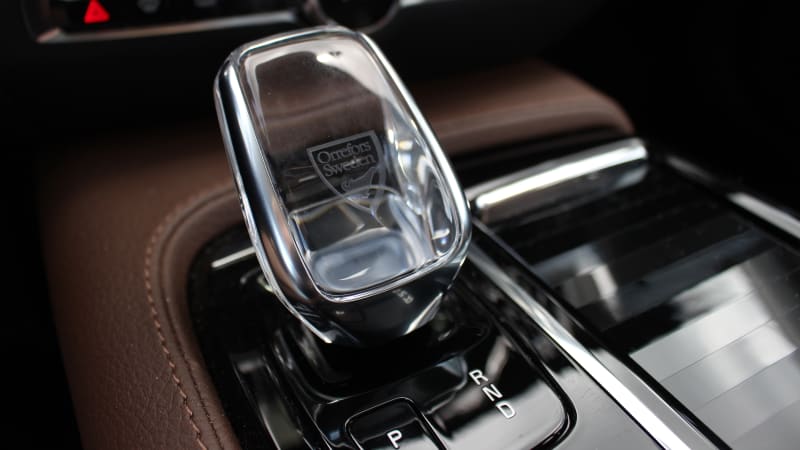 Volvo’s attractive and refined shape is mirrored in its stylish, welcoming interiors. With premium materials and beautiful design from top to bottom, it’s difficult to find anything negative to say about the XC60’s interior. Open-pore wood and real metal are both available depending on trim, and Recharge Inscription models even get an Orrefors crystal gear selector.

Volvo’s Sensus infotainment suite is compatible with both Android Auto and Apple CarPlay, and also offers robust integration with phones via Bluetooth, including speech-to-text, allowing it to read and compose text messages without outside assistance.

Sensus lacks polish in some areas, offering slow boot-up times and menus that can be difficult to navigate on the road. Still, several of our editors appreciate its touchscreen layout and find it less overwhelming than admittedly quicker and flashier systems like Mercedes’ MBUX and BMW’s iDrive. Its settings also allow for à la carte selection of just about all of the XC60’s safety and driver assist technology. 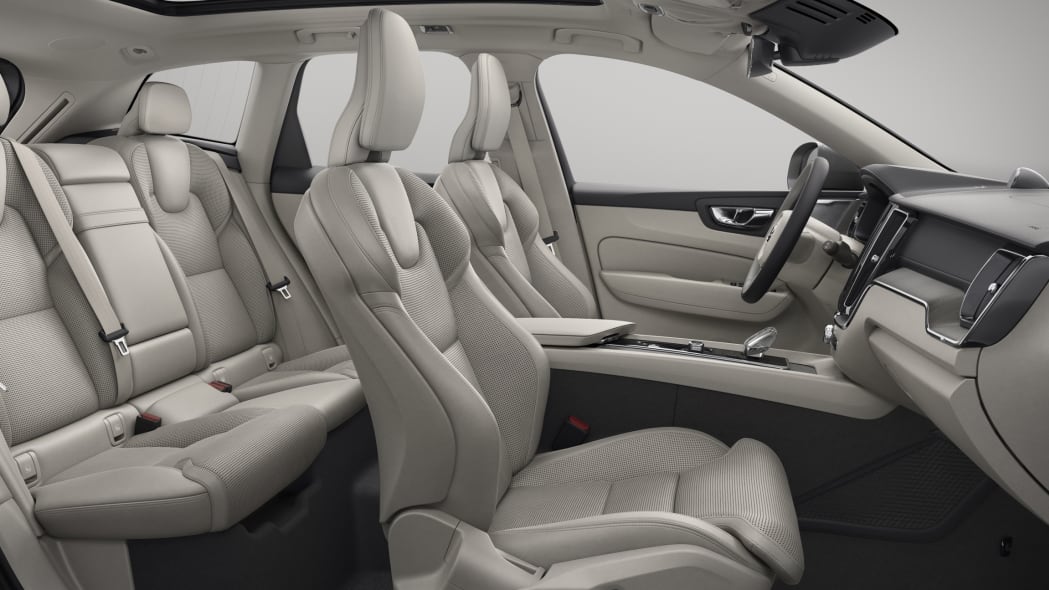 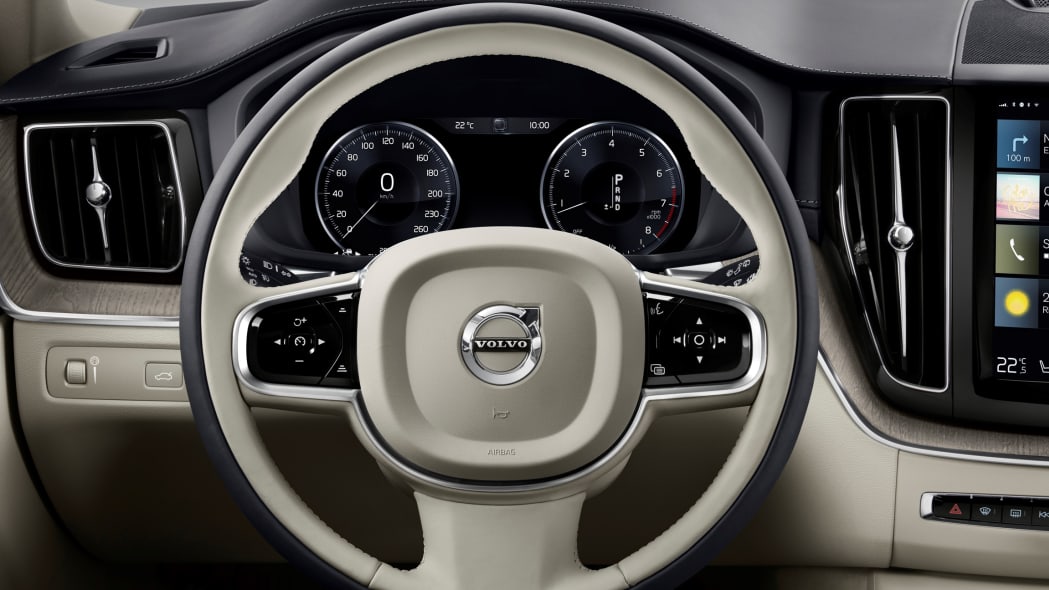 The XC60 is Volvo’s compact crossover, slotting above the smaller XC40 and below the flagship XC90. With a wheelbase of just under 113 inches and an overall length of approximately 185 inches, it’s the same size as most of Europe’s luxury compacts, including the BMW X3, Mercedes-Benz GLC-Class and Audi Q5. Thanks to their midsize-like wheelbases, these ostensibly compact crossovers offer plenty of people- and cargo-hauling capability.

When comparing them back-to-back, however, we’ve found the XC60 ultimately has more back seat space than the Germans, making it a tad more family friendly. We also like that you can get Volvo’s unique integrated booster seats. The XC60’s cargo area is similarly one of the largest in the segment, with the Acura RDX being one of the few that surpasses it. XC60 Recharge models lose about half a cubic foot of rear cargo room due to the placement of the hybrid components beneath the floor.

We’d also be remiss if we didn’t mention the Volvo V60 Cross Country. This high-riding wagon is mechanically related to the XC60 and despite having less space on paper, the cargo area’s longer, boxier shape can be more useful. Its lower height also makes it easier to load roof carriers and ski racks.

What’s the performance and fuel economy?

Volvo offers the 2021 XC60 with three powertrains, all of which are based on the same 2.0-liter, four-cylinder engine and are mated to an eight-speed automatic transmission.

The base, dubbed the T5, is turbocharged and delivers 250 horsepower and 258 pound-feet of torque. It’s rated at 22 mpg city, 29 highway and 25 combined with front-wheel drive and 21/28/24 with the optional all-wheel drive.

The next step up is the T6, which uniquely has both a turbo- and supercharger, boosting output to 316 hp and 295 lb-ft.  T6 models feature all-wheel drive and EPA ratings of 20 mpg city, 27 highway and 23 combined.

Recharge models are equipped with the plug-in hybrid T8 powertrain, which includes a 65-hp electric motor. Total output in Inscription and R-Design models is 400 hp and 472 lb-ft of torque; Polestar Engineered models up the horsepower to 415. Volvo says the base Recharge will hit 60 in 5 seconds flat, with the Polestar Engineered model knocking a tenth of a second off that time. Both Recharge variants can operate up to 19 miles on electric power alone with a full charge and are rated at 26 mpg city, 28 mpg highway and 27 mpg combined once that all-electric range is depleted. 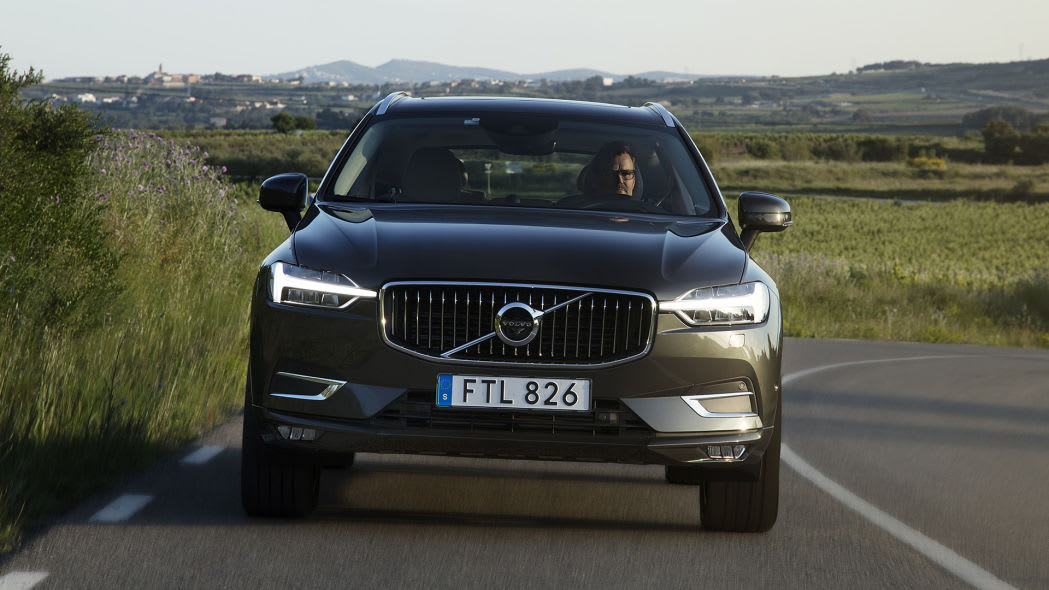 The XC60’s cabin is a haven for commuters and road-trippers thanks to its excellent seats and beautiful design. Higher-end models offer a plethora of customizable driver aids and an effective semi-autonomous adaptive cruise control with steering assistance that can significantly reduce fatigue on long trips.

On the road, the XC60 isn’t quite as composed as Volvo’s other 60- and 90-series offerings. Its larger optional wheels can significantly degrade ride quality, especially in areas with pockmarked pavement, and its base suspension got discombobulated on our mountain road test route. The takeaways from this should be: other Volvos are better to drive, stick to smaller wheels and most competitors handle better. This may sound damning, but it’s really not. Spec it right and the XC60 will be lovely to drive in 95% of the scenarios most drivers find themselves.

Now, a sport suspension is included on R-Design models, and the Recharge Polestar Engineered model comes with an adaptive suspension that tightens up handling further. We haven’t tested these versions, so perhaps the XC60 can be an athlete with the right boxes checked. We’d still be weary of the big wheels, though. Recharge models, with their hybrid batteries and all-wheel drive systems, are also on the heavier side, coming close to the 5,000-pound mark. 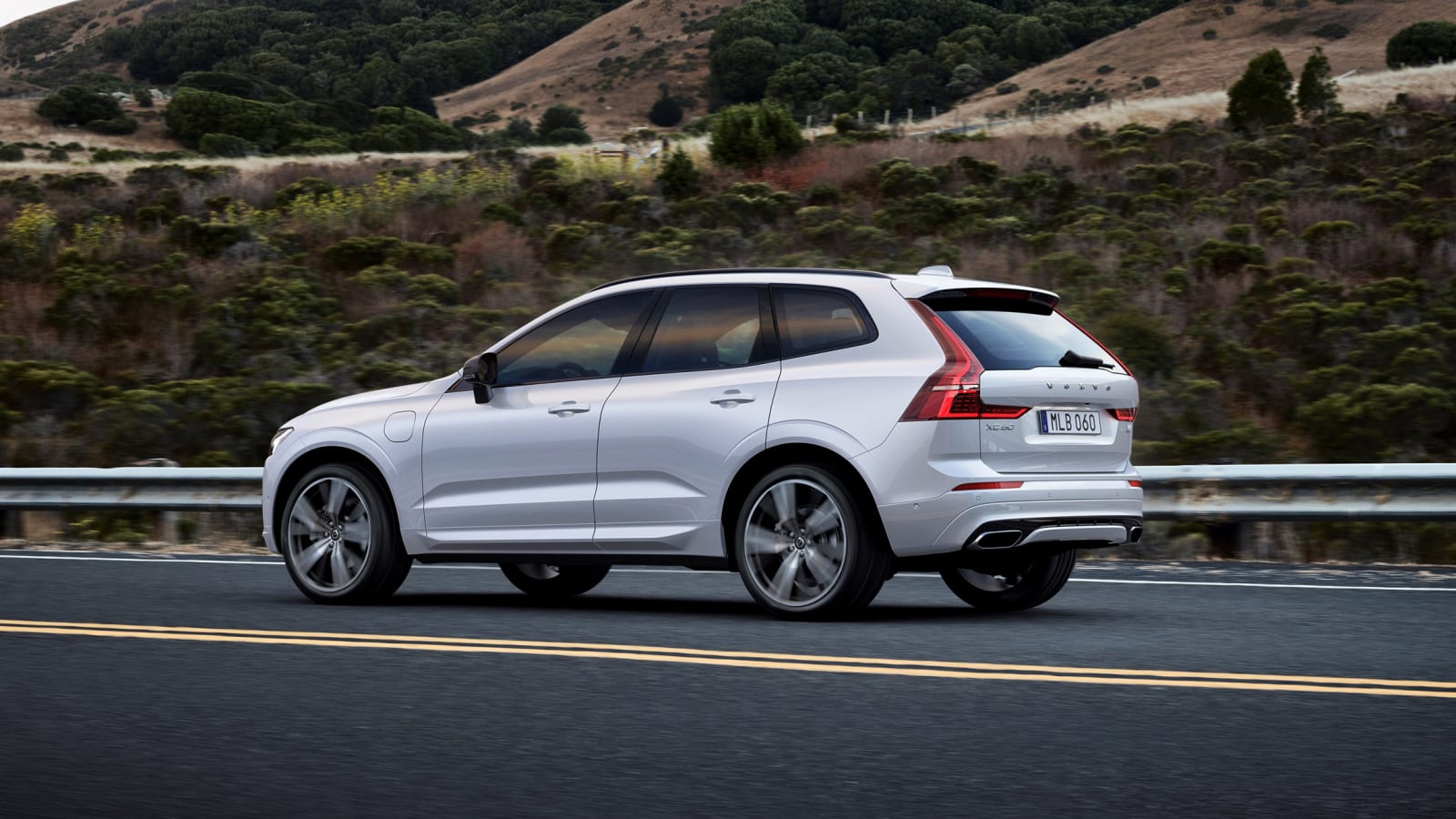 What else can I read about the Volvo XC60?

Our first experience with the XC60 revealed few surprises: it was based on the same platform as the bigger 90 series Volvos, it looked liked them and shared much of their technology. That’s hardly a bad thing. 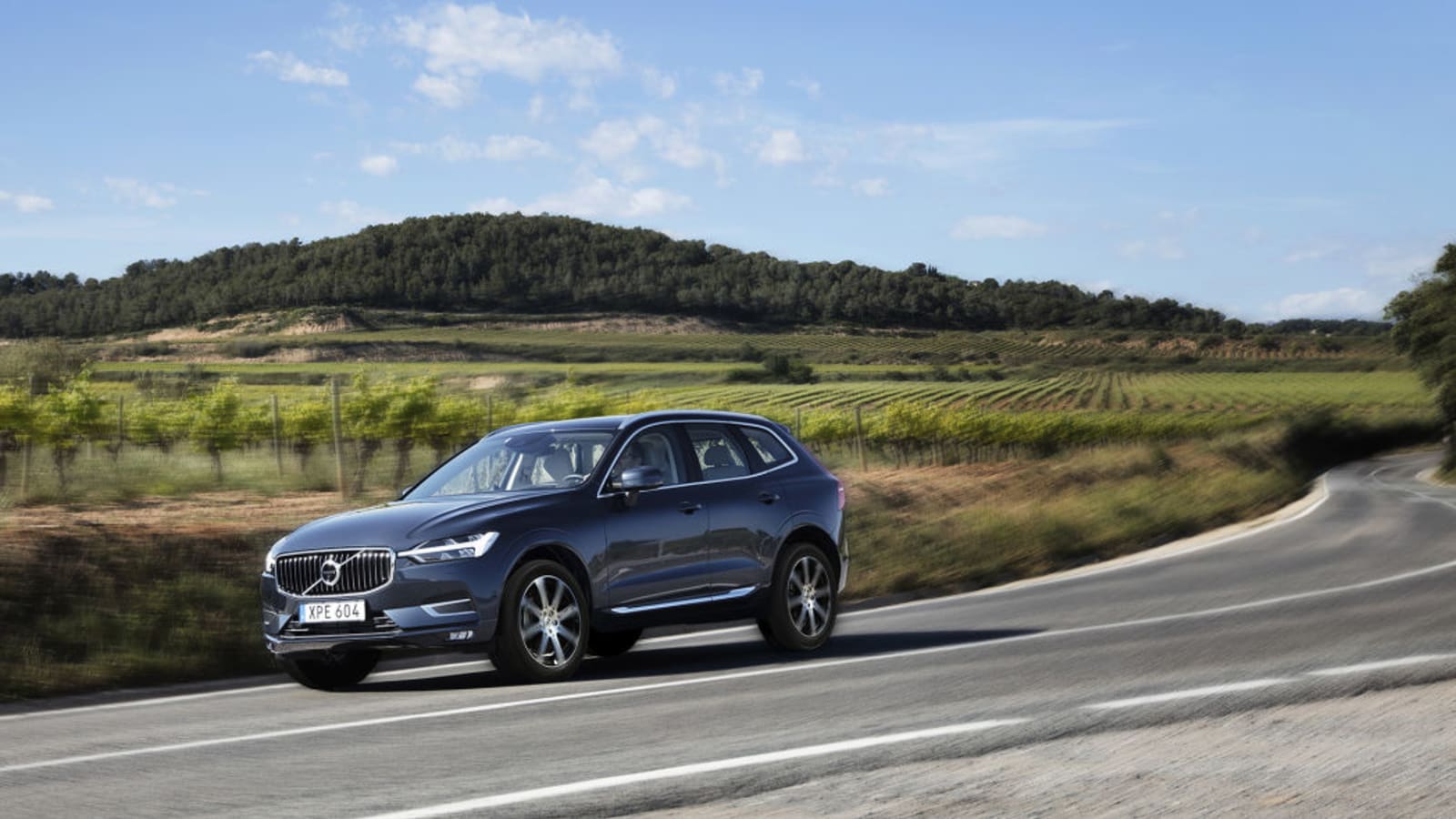 This XC60 is an adrenaline-addled crossover with giant brakes 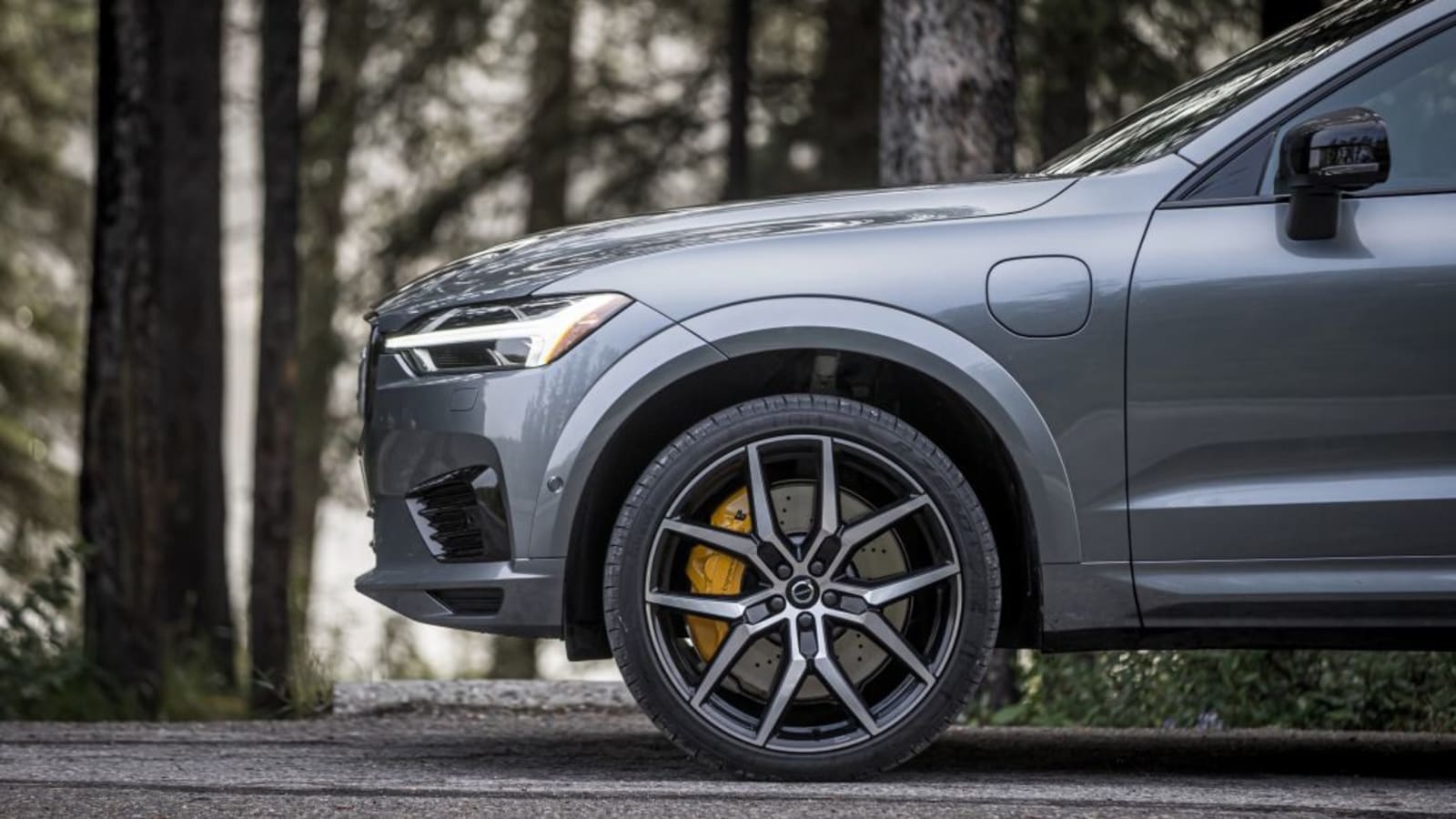 It’s the best powertrain choice – as long as you can afford it. 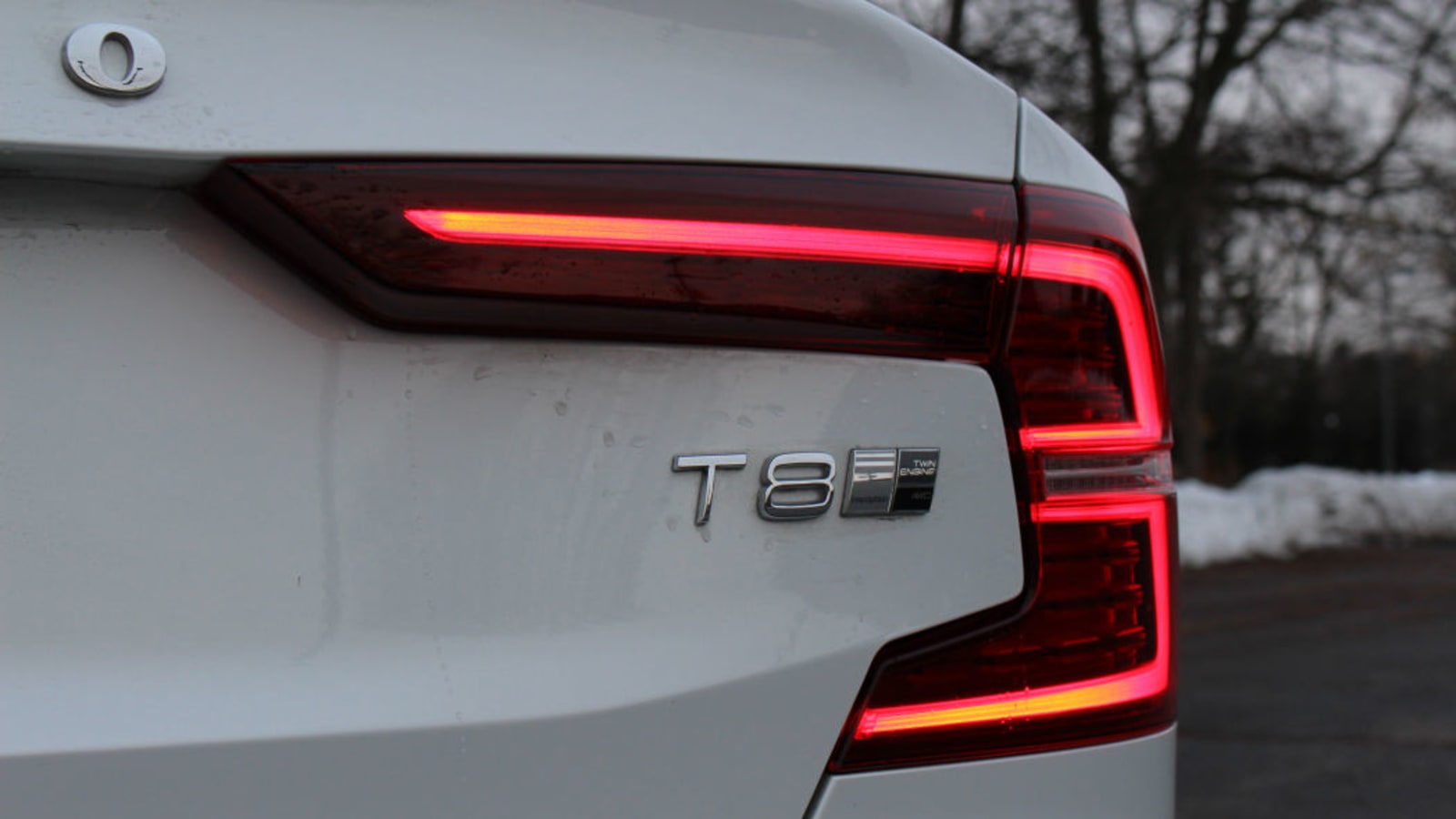 In this update for our long-term S60 test car, we highlight the benefits of Volvo’s Sensus infotainment system that’s also found in the XC60. 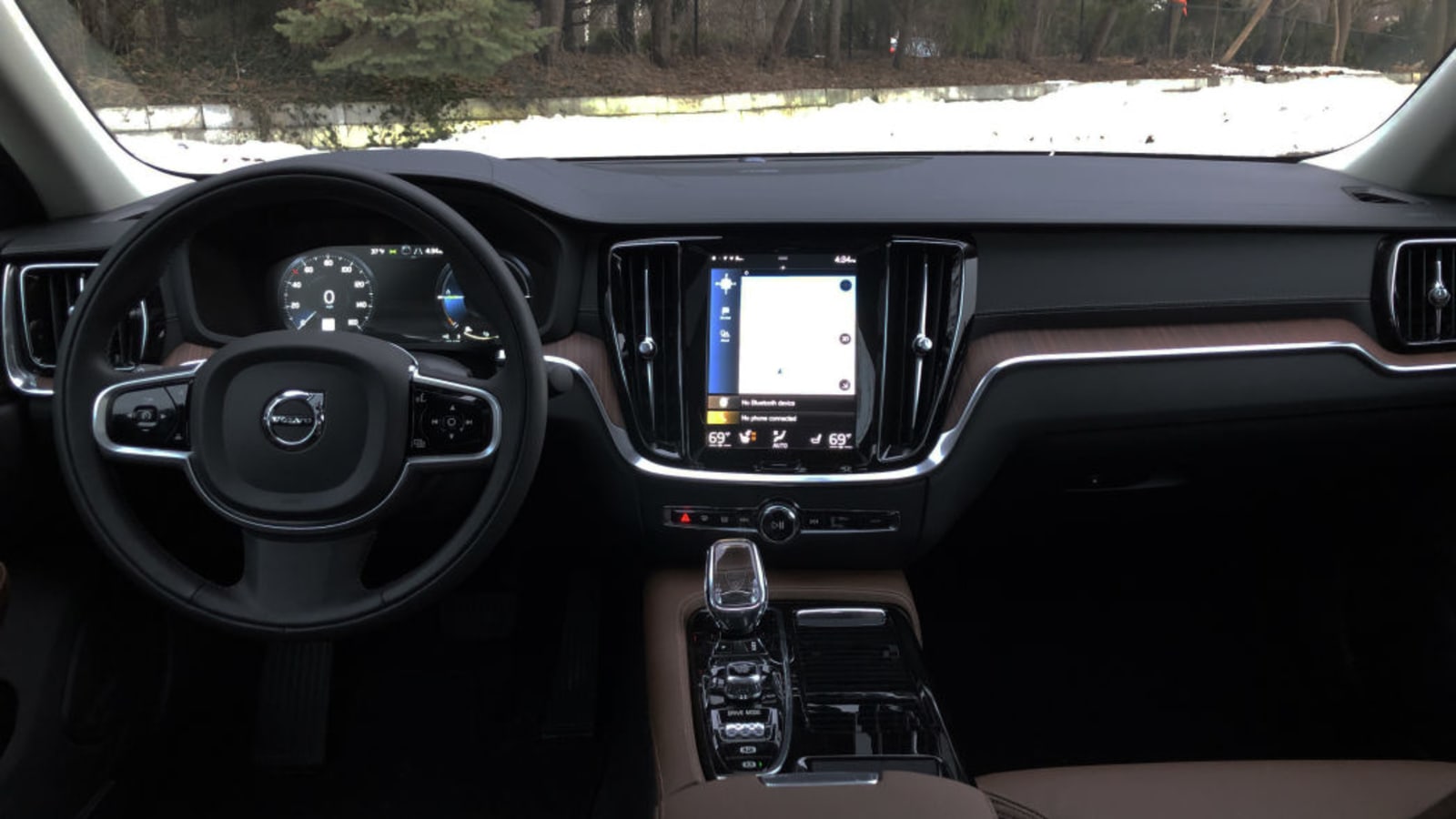 What features are available and what do they cost?

The 2021 Volvo XC60 starts at $42,695, including a $995 destination charge. The model range is broken down into engine choice, designated by T5, T6 and Recharge, and then trim level: Momentum, R-Design, Inscription, Inscription Expression and the Recharge-exclusive Polestar Engineered.

Base Momentum models are reasonably well-equipped, sporting features such as leather seating and shifter/wheel trim, dual-zone climate control, a power-adjustable driver’s seat with lumbar adjustment and an auto-dimming rearview mirror. Volvo’s “City Weave” plaid cloth interior is also available. It looks sensational, but we’ve yet to find a dealer brave enough to order a car with it.

From there, you can step up to either the R-Design, which is for those who prefer a sportier look and drive, or the Inscription, which is more luxury-oriented. R-Design models include a sport-tuned suspension, leather sport bucket seats, metal interior trim pieces, and a black mesh grille. Inscription models get leather seats without the extra bolstering, a slotted grille and wood trim. Otherwise, the two essentially share the same list of feature upgrades, including a 14-speaker Harman Kardon audio system.

The Polestar Engineered model is Volvo’s range-topper. It is available exclusively on Recharge models and gets several unique Polestar treatments, including an upgraded suspension, 21-inch wheels, a Bowers and Wilkins audio system and more. 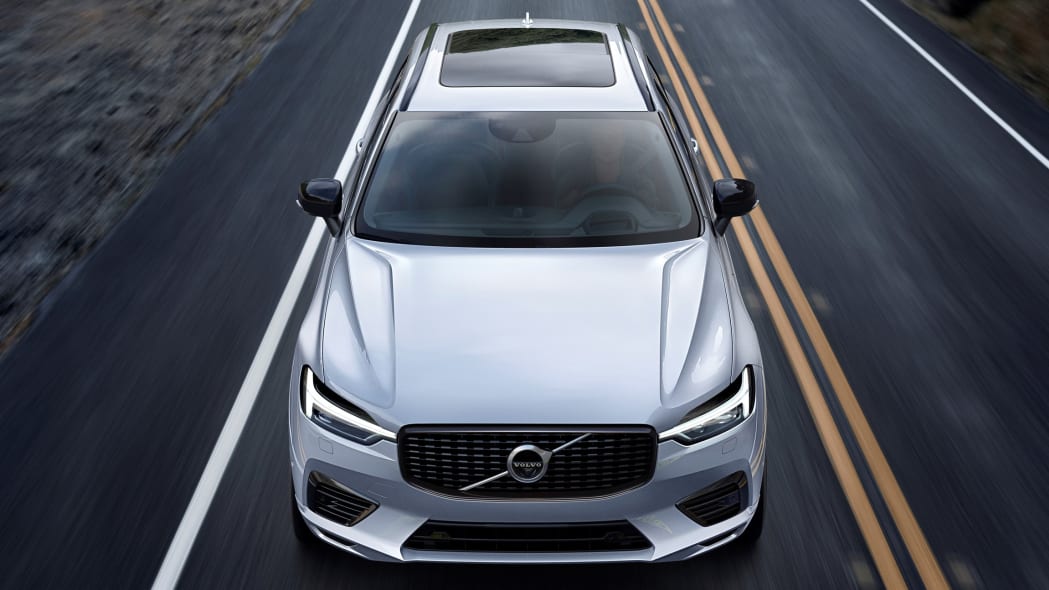 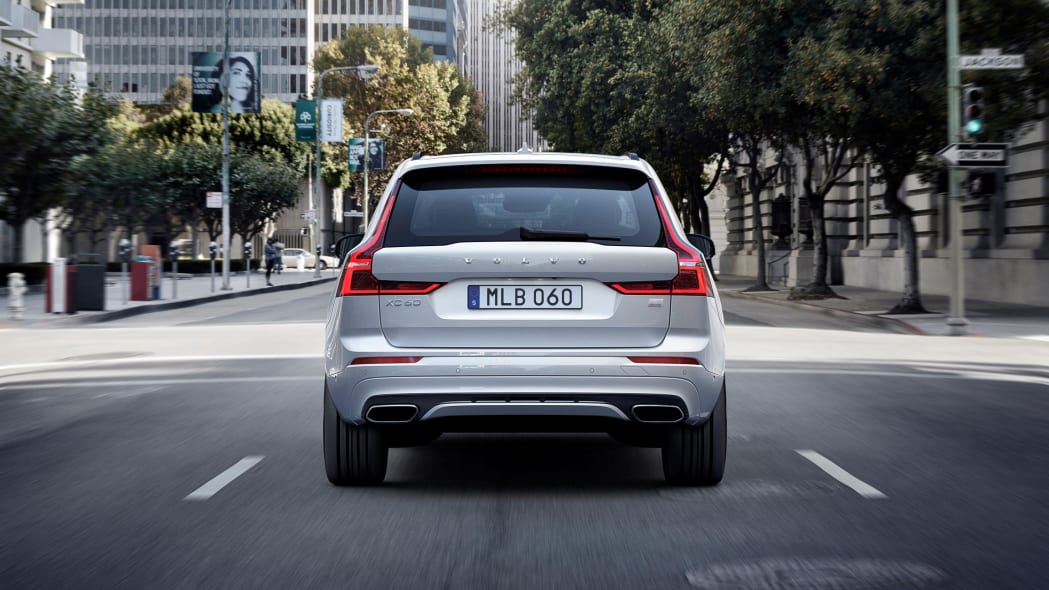 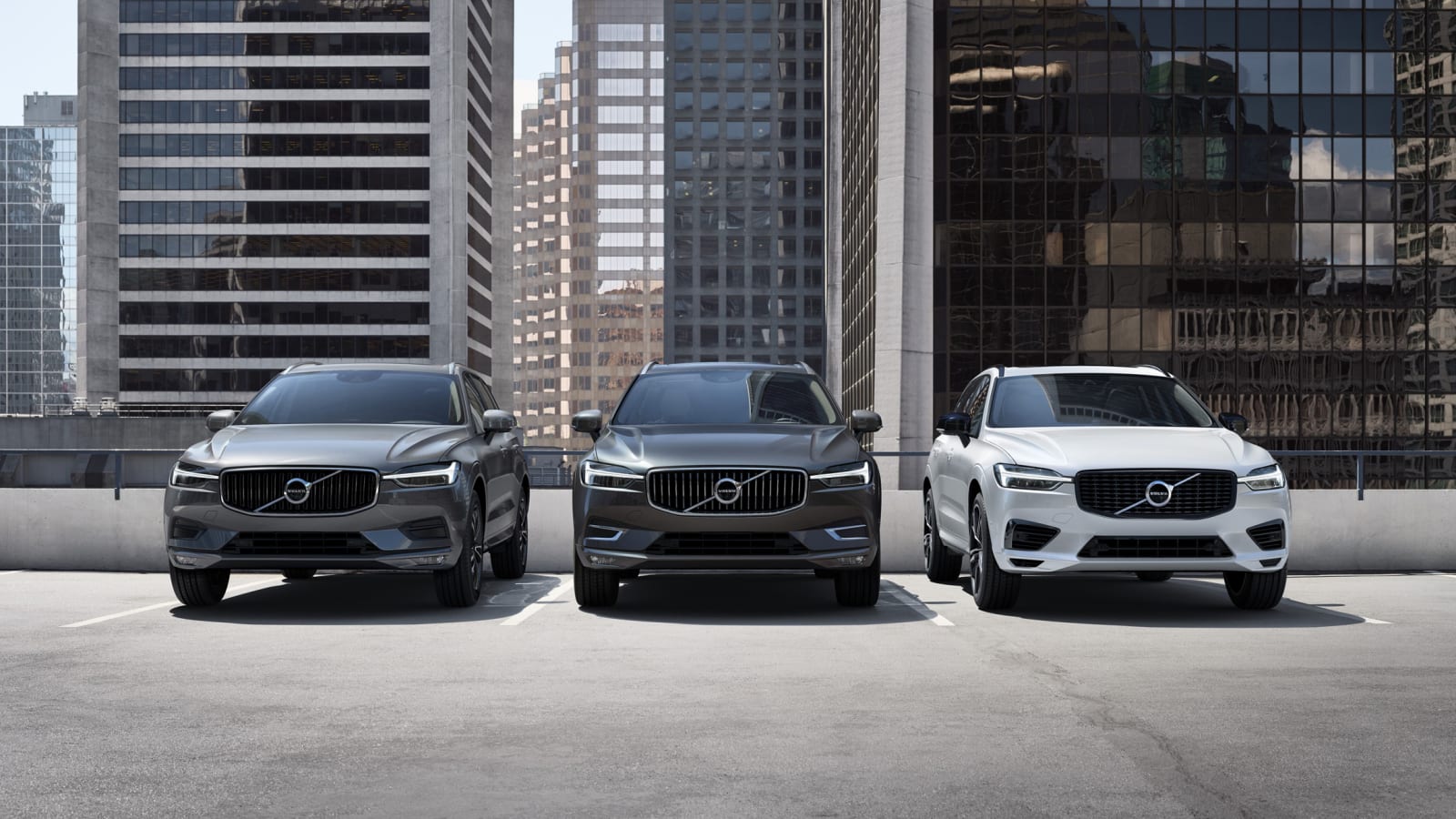 What safety equipment does the XC60 offer and what are its crash test ratings?

“Volvo” has long been synonymous with safety innovation. As such, many of its available safety systems are standard. These include front and rear collision warning, automatic emergency braking, lane-keeping assist, blind-spot and rear cross-traffic warning, hill start assist, and a whole host of airbags. Volvo’s excellent adaptive cruise control system with steering assistance is available, but unfortunately bundled in the Advanced package with other items like a head-up display, wireless charging and a 360-degree parking camera. Volvo’s unique integrated child booster seats are also optional.

The U.S. government gave the 2021 XC60 an overall five-star safety rating. The Insurance Institute for Highway Safety awarded it with a Top Safety Pick. It just missed out on the Top Safety Pick+ designation due to the performance of its headlights. The standard lights were rated only “Marginal,” while the upgraded units included with the Advanced package were rated “Acceptable.”

Auto Experthttps://automobiledot.com
As an Editor and an Automobile Geek, it's my pleasure to share my knowledge about Automobiles and their various aspects that can impact our lives.
Previous articlePorsche tuner Ruf Automobile still selling 911 964-based RCT Evo
Next articleJamaican bobsleigh team trains on the slopes using a MINI Convertible