The 2022 Acura MDX has finally been unveiled in production guise, and no surprise, it looks just like the prototype that was shown a couple months ago. Inside and out, there doesn’t seem to be any difference. It also turns out that most of the details given regarding the prototype are the same for the production car. But we do have some more details and specifications, and we even have pricing.

The MDX is completely redesigned from the ground-up. It is the first vehicle to use a new platform for light-truck use, and is not shared with the also recently redesigned Acura TLX sedan. There are similarities, though, as the MDX has a double-wishbone front suspension and multilink independent rear suspension as the TLX has. Acura notes that the chassis is the stiffest crossover/SUV chassis the company has ever created. Acura also added larger front brake rotors; they’re 1.2 inches larger in diameter.

It’s a bigger body than the previous MDX, too. It’s 2.2 inches longer overall, with a 2.8-inch longer wheelbase. It’s 1.4 inches wider than the old model, and is about half an inch taller. The proportions have changed significantly with a longer dash-to-axle ratio that gives the new MDX the look of a rear-drive vehicle. The hood is more horizontal, adding length visually. The sheet metal is clean and smooth with only a handful of creases and pieces of trim adorning it. 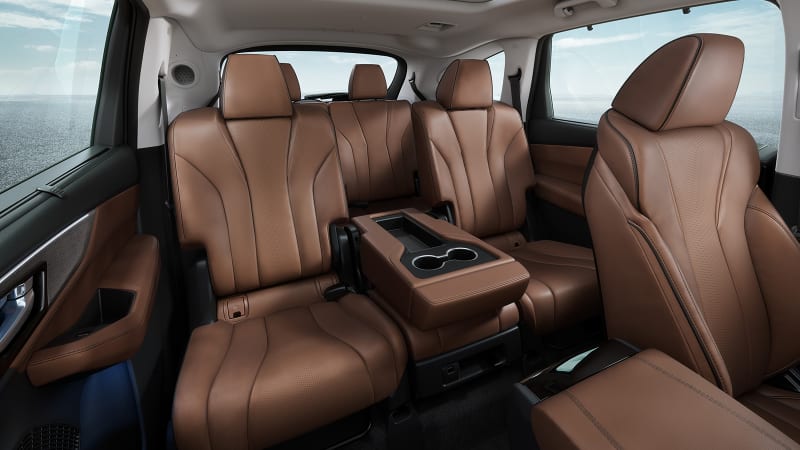 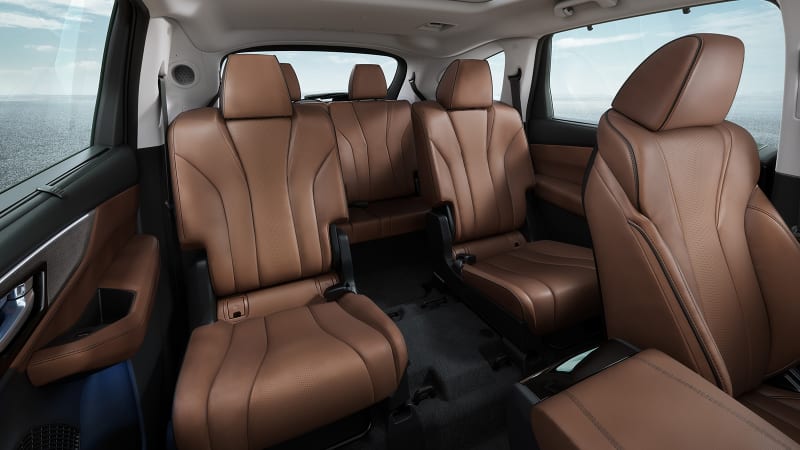 As for the interior, the design is very similar to the TLX and RDX with chunky, curvy panels. Six different leather colors are available, with the selection varying by trim package. Ambient lighting with 27 different color combinations is also available, and besides the combinations based on the drive modes, they’re all named after race tracks and roads such as Suzuka and Route 66.

Only one seating combination is available and it’s unique. Rather than offering a choice of a second-row bench seat or captain’s chairs, the new MDX effectively offers both. It has a second-row bench in which the middle seat can fold down to provide a large center console, or it can be removed entirely to provide access to the two-seat third-row bench. This versatility means every MDX can hold seven passengers. The third-row bench has also gained 2.4 inches of leg room, and the seat sits another 1.4-inches off the floor, all of which should make the way-back more comfortable. Not only that, but cargo space has increased. Maximum space behind the third row is up by 2.3 cubic feet to 18.1 (ample for the segment), and space behind the first row is up by 4.1 to 95 cubic feet.

The standard MDX gets a naturally aspirated 3.5-liter V6 making the same 290 horsepower and 267 pound-feet of torque as the old model. Acura’s global development lead noted that the V6 was chosen over the turbocharged 2.0-liter four-cylinder from the TLX because that four-cylinder didn’t meet the company’s targets for real-world fuel economy, refinement and responsiveness when placed in a three-row crossover. While the engine is carryover, it is now paired to a 10-speed automatic, rather than the outgoing nine-speed. Front-wheel drive is standard, while a new-generation Super Handling All-Wheel Drive (SH-AWD) system is an option. The latest version of SH-AWD is 30% faster at sending torque to the rear wheels. Up to 70% of engine torque can be sent to the back, and like past versions of SH-AWD, all of that torque can be sent to either the left or right rear wheel. 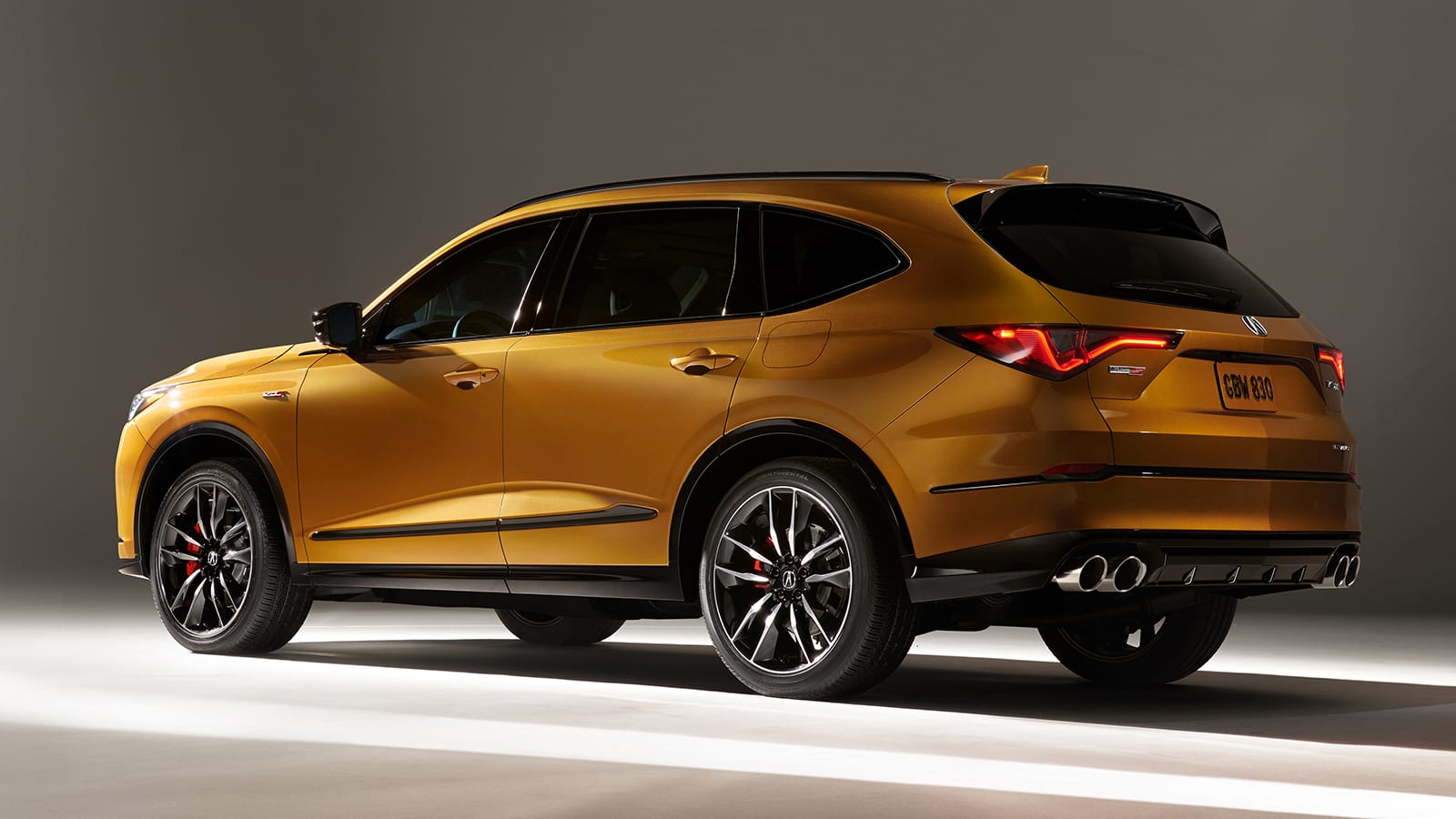 An MDX Type S is also on the way. It will get the turbocharged 3.0-liter V6 shared with the TLX. It makes 355 horsepower and 354 pound-feet of torque. It comes standard with SH-AWD as well as wider 275-series tires on 21-inch wheels and four-piston Brembo front brake calipers. Acura hasn’t given any further details on the Type S, but we should know more when we’re closer to its summer 2021 release window.

As for the regular MDX, it goes on sale Feb. 2. The base price is $47,925. That gets you a front-wheel-drive model with 12.3-inch displays for instruments and infotainment. A 350-watt 9-speaker sound system is also standard as is wireless Android Auto and Apple CarPlay, wireless charging, Amazon Alexa integration, a panoramic sunroof, and the AcuraWatch suite of driver-assistance features. As before, AcuraWatch includes automatic emergency braking, adaptive cruise control and lane-keep assist, but it’s been bolstered for 2021 by rear automatic emergency braking and stop-and-go functionality for the adaptive cruise control. All-wheel drive is a $2,000 option on the base MDX and the MDX with Technology Package, and it’s standard on the A-Spec and Advance Package models. Base prices for all MDX models are listed below.

Auto Experthttps://automobiledot.com
As an Editor and an Automobile Geek, it's my pleasure to share my knowledge about Automobiles and their various aspects that can impact our lives.
Previous articleThe WeatherTech CupFone Two View Smartphone Holder
Next article2022 Acura MDX doesn’t seem to be getting a hybrid