In an interesting turn of events, the new 2022 BMW 2 Series Coupe is more traditionally BMW looking than all of the brand’s other recent vehicles. While other Bimmers were designed with radical departures from BMW’s classic design language, the new 2er is refreshingly old-school. In fact, there are a lot of design cues that harken back to the BMW 2002, the original pre-cursor to the 2 Series. However, it still has some new and interesting design elements that some BMW purists might find offensive. So let’s break down the new 2er’s design to see how well it works. Or doesn’t work.

Up front is where most of the interesting design elements are. Let’s start with the grilles. BMW isn’t exactly beloved for its grille design as of late. With cars like the 4 Series, M3, and M4, BMW took what was an iconic design and mutated it into something entirely different, much to the disdain of the fanbase. However, the new 2 Series is a bit different. Not only is the grille back to being a reasonable size but it actually looks a bit like some older Bimmers, namely the BMW Z8. 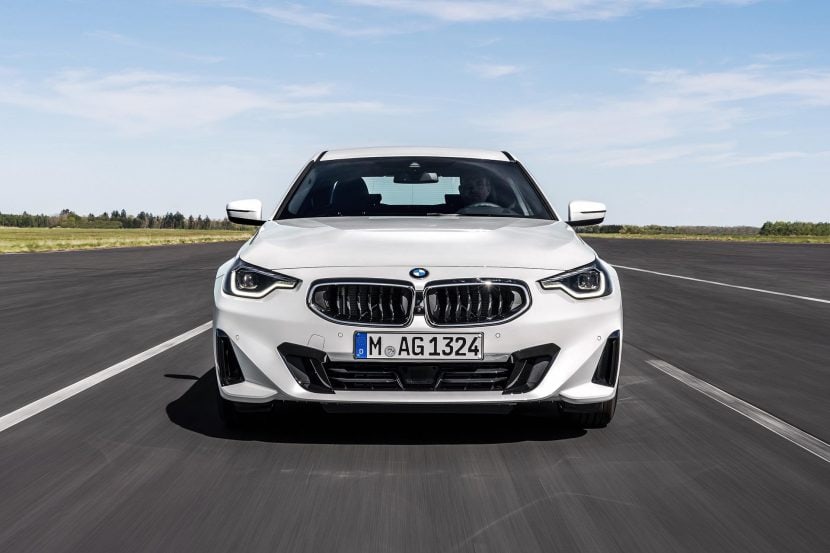 There’s an interesting aspect of the grille that should be noted, though. Since the 1930s, almost every single BMW ever made with a front grille used vertical slat inserts. For the BMW 2 Series, those slats are gone, replaced with active air shutters. While those shutters actually sort of become vertical slats when they’re open, when they’re closed there are no slats. That sounds trivial but it actually makes a difference. With other more modern BMWs, active grille shutters were independent of the vertical grille slats, allowing the traditional BMW grille look to exist even when the shutters were closed. This design changes that.

The 2 Series headlights are also both sort of new and sort of old. Since as long as most BMW fans can remember, any car with a Roundel sported some form of a dual-circle headlight design. Even as BMW began to play fast and loose with the term”circle”, the classic design element still remained. With this new 2 Series, though, the dual-circle design is now a single-circle design. That might seem like heresy to some knee-jerk enthusiasts but it’s actually a throwback to the BMW 2002. The 2002 had single circle headlights and the new 2 Series — again playing fast and loose with the actual shape of the circle —  honors it.

With the 2002, BMW sort of cemented itself as a builder of small, two-door, four-seat coupes with tall windows and excellent visibility. Since then, it’s been quite successful at replicating that recipe, even with some modifications. Even the newer 1 Series and 2 Series Coupes had the classic three-box coupe design with tall windows. This new 2 Series keeps that recipe mostly intact, even if it is a bit lower and leaner than ever before. The roofline is lower than the outgoing car’s and its roofline is more aggressive, giving it a sportier, more athletic look. 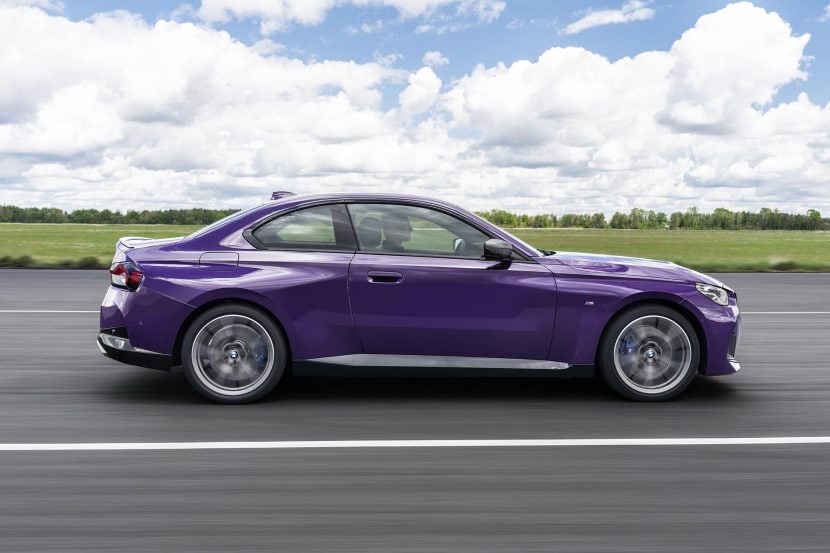 There are also some other interesting design elements on the side of the car. Even on the standard cars, the 2 Series’ fenders are flared out quite a bit and there’s a very upright crease where BMW’s now-typical “Air Breather” vent usually goes. The door handles are flush, just like the new BMW i4, and the Hofmeister kink is more traditional looking than it’s been in ages. So there’s a nice mix of old-school BMW and new-school BMW, which is what we should all want.

For the most part, the back of the new 2 Series is inoffensive and maybe even a bit boring. However, its taillights are certainly interesting. For starters, they’re too far apart and they’re also oddly misshapen. They’re bound to cause some division among enthusiasts; for instance Horatiu likes them, I do not. However, at least their shape flows with the body lines at the rear, which can’t always be said about certain BMW design elements (I’m looking at you, M3 grille). The rest of the rear end is good, though. From the built-in rear spoiler to the wide hips and chunky rear “diffuser”, the new 2 Series looks sporty and athletic from behind. 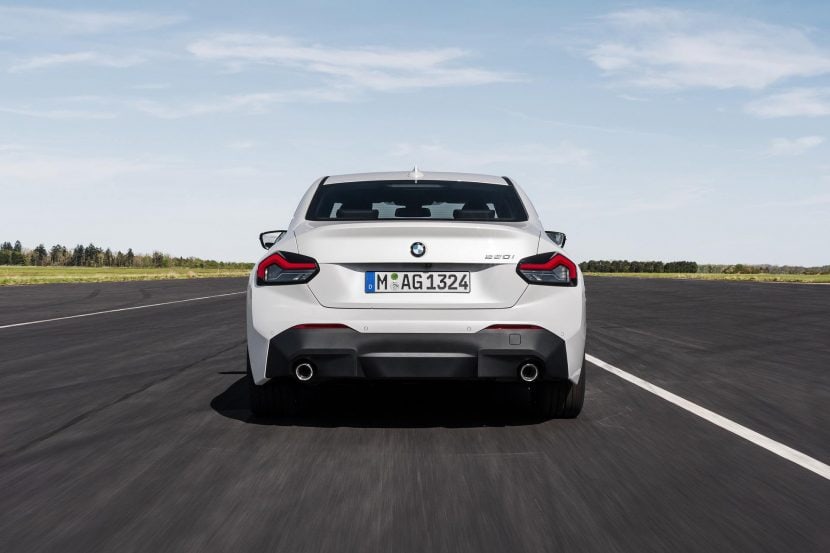 Though, there’s not too much to look at back there. BMW seemingly put all of its design development dollars into the front end and not the rear end. Though, that’s fine. In an age of massive beaver teeth grilles, we’ll take a little boring. It’s actually refreshing, if that’s possible. Credit where credit’s due, though — everything about the rear end seems cohesive. Body lines match up, shapes work well with each other, and there aren’t any unnecessary fake vents. BMW cut the fat away with this new 2 Series and it’s greatly appreciated.

I’ve already seen some criticism about the new 2022 BMW 2 Series on social media. It seems car enthusiasts are complaining about its rear end design more than anything else. However, I’d argue that there’s nothing to complain about. While I enjoy most BMWs, I’m far from a BMW fanboy and I’ve given the brand a fair share of criticism over the past few years. My wife tells me I sleep talk about how much I hate the 4 Series’ grille. That said, I like this new 2 Series. I think it’s a sharp, handsome, and refreshingly simple design that will get better with age. 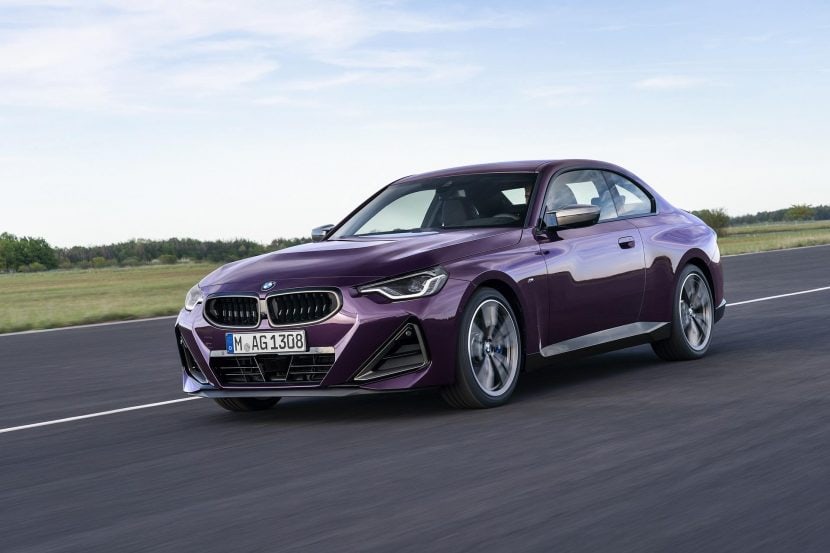 There are also just enough little kisses of the past to actually justify the press release jargon that came with it. Things like the single circle headlights, harking back to the 2002, actually make this new 2 Series feel a bit more special. So while it’s not perfect, nor is it particularly beautiful, I think it’s a good design and it’s the sort of direction BMW’s design team needs to take with the rest of the lineup: honor the heritage, simplify, and look toward the future.

Auto Experthttps://automobiledot.com
As an Editor and an Automobile Geek, it's my pleasure to share my knowledge about Automobiles and their various aspects that can impact our lives.
Previous articleJust do the zipper merge, for the sake of all things holy
Next articleIneos Grenadier’s interior is an exercise in function-over-form design

BMW has been spotted testing a prototype for an...
Read more