2022 BMW i4 performance, range and other specs revealed with new pictures

While BMW sales are now dominated by crossovers, there’s no denying that the brand’s history and fanfare are dominated by sedans. That makes the 2022 BMW i4 revealed today with full specs and photos the most important electrified Bimmer yet.

In a way, you could think of it as an all-electric 4 Series Gran Coupe. Its name and interior design would back that up, as would its coupe-like body that stretches just a bit longer than the 3 Series sedan’s at 188.3 inches versus 182.7. It’s also an inch wider (72.9) and 0.6 inch taller (57.0). Despite a loftier height, its skateboard-style battery pack results in a center of gravity that’s either 1.3 or 2.1 inches lower depending on the flavor of i4 you choose.

Speaking of which, there will be two models: the i4 eDrive40 and i4 M50. They share a common 81.5-kilowatt (usable) battery pack, but their motors differ. The base eDrive40 has a single rear motor with integrated single speed transmission that produces 335 horsepower and 317 pound-feet of torque. The M50 has motors front and rear for effective all-wheel drive. The front motor, again with an integrated one-speed transmission, has 255 hp, while the rear motor has 308. Together, they produce a total system output of 536 hp and 586 lb-ft. The M50’s Sport Boost function can then provide a 10-second jolt of 67 extra horses and 48 more pound-feet – and in a feature slightly comparable to Mario Kart, you can keep on pressing the Sport Boost button as long as the battery allows.

BMW estimates the eDrive40 will travel 300 miles on a charge, while the i4 M50 will go 245 miles. These are comparable to the Ford Mustang Mach-E as one example, but are less than a Tesla Model 3. Both models have a DC fast charging capacity of up to 200 kW that can gain 90 miles in 10 minutes. You can also recharge using a Level 2 charger from totally empty to full in 8 hours.

Drivers will have a choice of three levels of regenerative braking, including a high setting comparable to what electrified BMWs have provided going back to the original electric Mini Cooper. If you’re a fan of one-pedal driving (we are), the i4 should make you happy. However, it also offers a coasting function for those so inclined and ups the ante with an adaptive brake energy recuperation function that takes into account myriad inputs to vary recuperation and braking according. Frankly, BMW’s description of this feature is confusing and is probably something better described once we get a chance to try it out in person. The same goes for the i4’s Level 2 driver assistance system, which integrates speed limits and navigation route guidance inputs into the optional adaptive cruise control system.

To make up for the lack of zesty internal combustion noises, the i4 features “an unmistakable, model-specific acoustic experience” from startup to full throttle, developed in collaboration between BMW and Academy Award-winning film composer Hans Zimmer. We’ll see if “BMW i4” shows up after “No Time to Die” in his IMDb profile.

In terms of old-fashioned BMW concerns like “handling” and “steering,” every i4 includes a double-joint spring strut front axle, a five-link rear, load-leveling rear air suspension and an adaptive “lift-related” shock system. The latter is a speed-dependent system that reduces body motions and vibrations. The adaptive M suspension standard on M50 and optional on eDrive40 is a driver-selectable system with different modes, much as you’d find in most other BMWs. Steering is speed-sensitive with two settings of Comfort and Sport, while the variable sport steering upgrade (standard M50, optional eDrive40) is a speed-sensitive variable ratio system.

As the first fully electric car tuned by BMW M GmbH, the M50 features additional upgrades over the eDrive40, including an additional brace fitted between the two strut towers, special anti-roll bars, M Sport brakes and lighter-weight wheels measuring 19 or 20 inches. It’s also tuned to be rear-biased in its power delivery despite having the front motor, and its weight distribution is closer to the 50/50 BMW ideal at 48.1/51.9 (versus 45.1/54.9). Visually, the M50 differs with a unique front bumper and Cerium Grey trim applied to the grille, mirror caps and rear bumper. Other bits and pieces are painted gloss black, while the trunk lid gets an M-specific spoiler.

As for the overall design, the i4 obviously descends from the beaver branch of the evolutionary tree. Without a trace of irony, the press release proudly declares that the “BMW kidney grille … is largely blocked off due to the small amount of cooling air required by the electric drive components.” For that small amount of cooling, an active air flap adjusts in 10 stages to provide air precisely to the areas that need it. 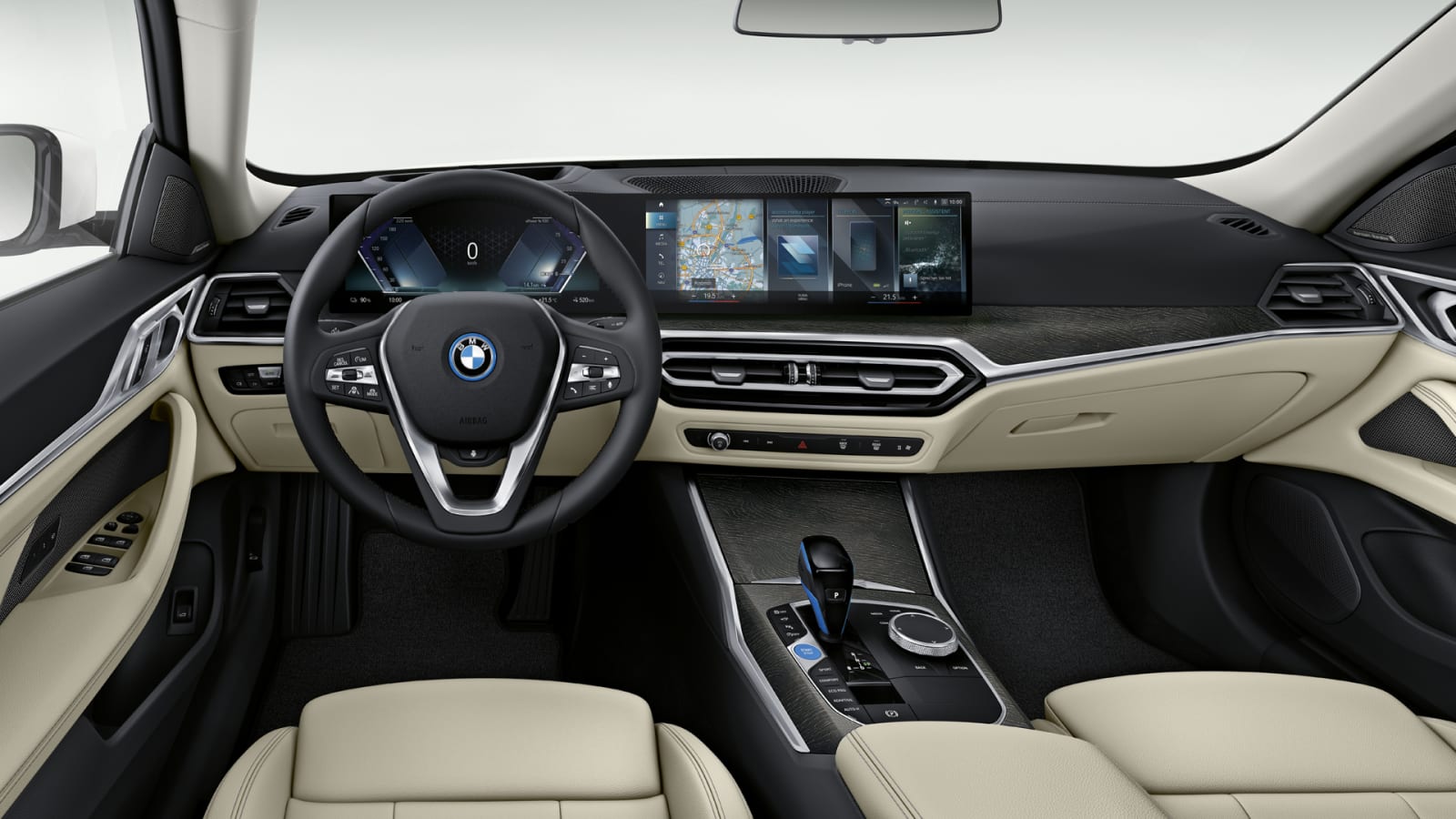 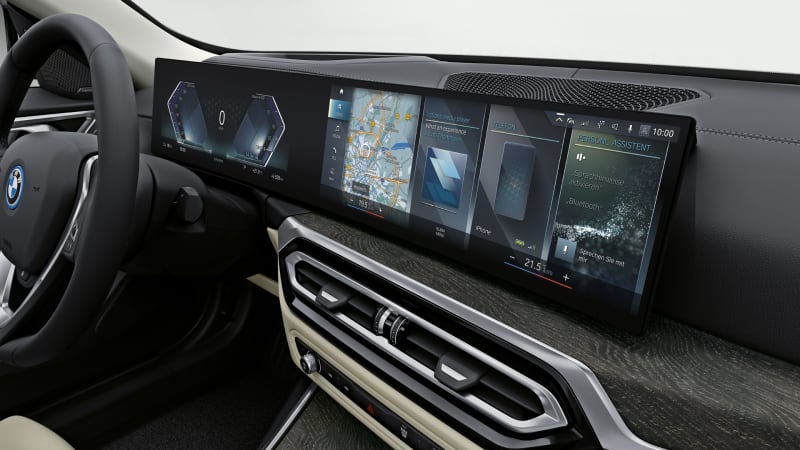 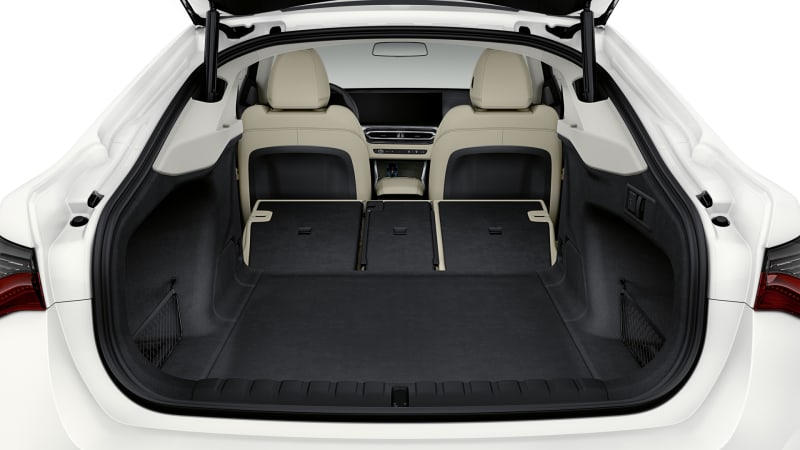 The interior is basically the same as a regular 3/4 Series but with the hatchback trunk lid of a Gran Coupe and the iX’s enormous, curved infotainment display applied to the dash. Consisting of a 14.9-inch central display and 12.3-inch information display behind the wheel, the two are connected behind a single frameless glass surface. A head-up display is also included and is apparently better integrated with the main displays below. All are controlled via the next-generation iDrive 8 interface (the 3/4 Series has iDrive 7), which includes new displays, controls and data processing. It also has new natural speed recognition voice commands and over-the-air updates.

Other features include a new climate control system that can automatically integrate the heated and ventilated seats into your temperature selection, and that also considers the number of passengers aboard and where they’re sitting. The glass roof comes standard and features a slide/tilt sunroof portion up front, while optional ambient lighting helps spruce the cabin up beyond what is otherwise a rather disappointing recycle of the 3/4 Series.

It’s also worth noting that BMW went out of its way to make the i4 eco friendly in more ways than just its lack of burning gasoline. To ensure high environmental, sustainability and human rights standards, BMW directly obtains the cobalt used in its battery packs before turning it over to suppliers, while also monitoring where the lithium is sourced. The company also says the electric motors do not use rare earth metals and that recycled plastics are used for many components. Finally, BMW is partnering with EVgo fast charging network that relies on 100% renewable energy. Buyers and leasees of the i4 will receive $100 in EVgo charging credits.

Auto Experthttps://automobiledot.com
As an Editor and an Automobile Geek, it's my pleasure to share my knowledge about Automobiles and their various aspects that can impact our lives.
Previous article2022 BMW i4 — BMW’s First Electric Sport Sedan
Next articleFirst Impressions — Here’s What the BMW iX is Like in Person

There’s no doubt in anyone’s mind that the...
Read more