Here it is, the second full-fledged Hyundai N model to be fully revealed for America (the Elantra N has still been hiding in camouflage). The 2022 Hyundai Kona N is pretty much what you’d expect: a Kona with the heart of the Veloster N and some visual flair. And that’s not a bad thing.

Powering the Kona N is Hyundai’s familiar turbocharged 2.0-liter four-cylinder. Hyundai says it makes 276 horsepower and 289 pound-feet of torque, which would put it slightly ahead of the Veloster N, even when the DCT-equipped one is making 278 pound-feet in overboost mode. The Kona N’s own overboost function kicks things up to 286 hp when in the transmission’s N Grin Shift setting (more on that in a moment). It’s possible these may be the numbers for the European-spec car, as they’re the same as what’s available in the i30 N hatchback. Hyundai says it will hit 100 km/h in 5.5 seconds with launch control activated, so a drop to 5.4 seems plausible once you translate that to 60 mph.

Included is an electronic limited-slip differential dubbed N Corner Carving Differential, which reduces understeer and may negate the fact that power only goes to the front wheels despite the regular Kona offering all-wheel drive. According to Hyundai Head of R&D Division Albert Biermann, all-wheel drive would’ve added cost, weight and complexity that was counterproductive to the Kona N’s performance mission, while adding that the car still performed admirably during winter testing in Sweden. Hyundai’s Global Marketing Officer Thomas Schemera further explained that there isn’t another high-performance subcompact SUV and the company wanted to keep the price as low as possible, though pricing was not announced.

“It looks like an SUV, but it’s actually a hot hatch on the inside,” Biermann said. “It fully meets our N philosophy … It wasn’t easy, especially since we wanted to keep the Kona’s versatility and high ground clearance.”

To that last point, Biermann said that his engineers lowered the first prototype by an inch, but he quickly nixed that. They already had the Veloster N, and he didn’t want to eliminate one of key benefits and points of appeal for an SUV, even a sport-tuned one. Ultimately, he said that creating the Kona N wasn’t about ultimate lap times or pure cornering speed, but rather ensuring that the car feels and responds in a way in keeping with the N philosophy of making each car “a corner rascal,” an every day sports car and be capable of track driving. 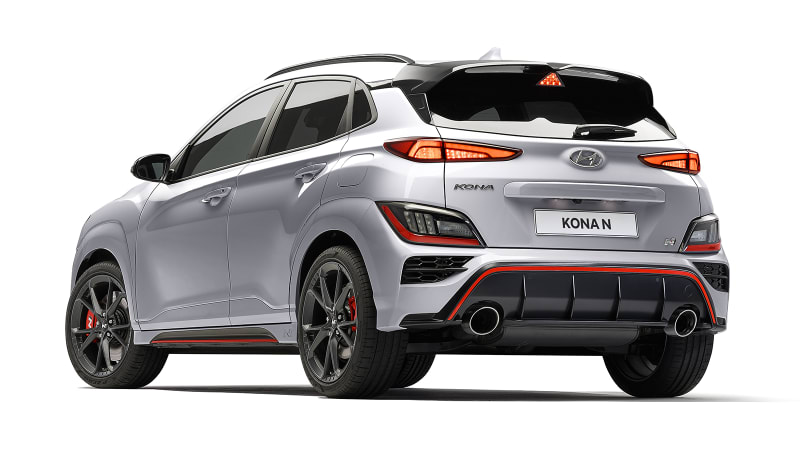 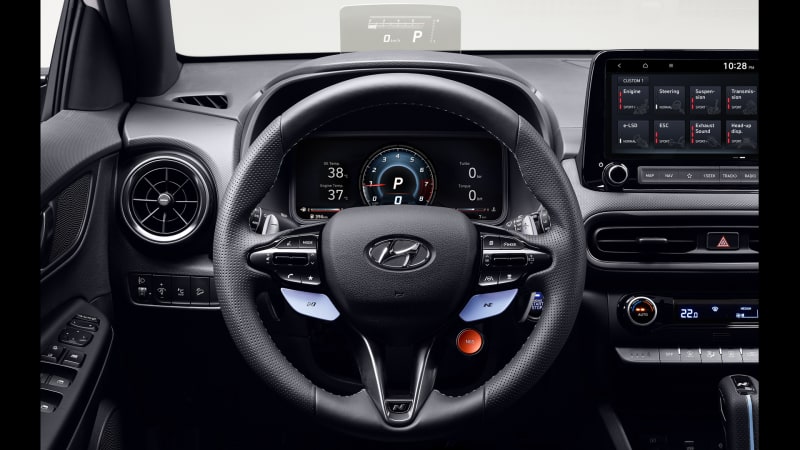 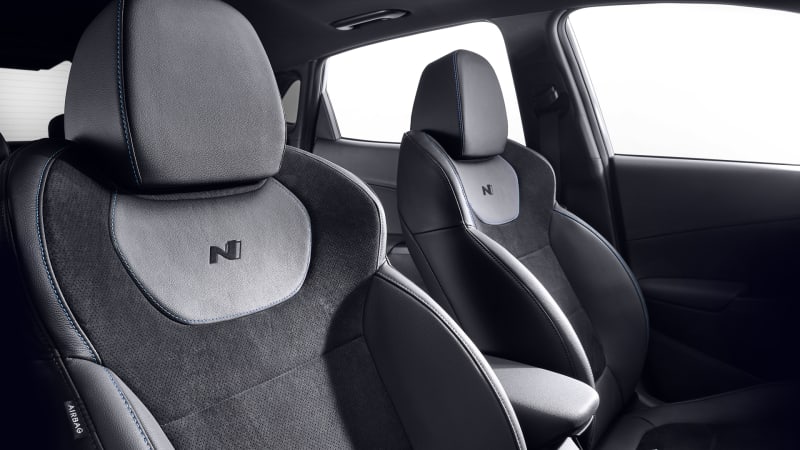 From the outside, the Kona N shares quite a bit with the lower 2022 N Line model, including the body-color fender flares and more aggressive front bumper, side skirts and rear diffuser panel. But the full N adds unique 19-inch forged wheels, a twin-level double wing spoiler that actually enhances down force, a novel triangular brake light, two fat exhaust tips, red accent lines and unique Sonic Blue, Performance Blue and Gravity Gold paint colors. Also of interest is that the Kona N is shorter than the Veloster N by about 2 inches in both overall length and wheelbase. But it’s also over 6 inches taller. The Kona N is heavier than the Veloster N, too. At 3,340 pounds, it’s about 100 pounds heavier than a dual-clutch Veloster N, and over 200 pounds heavier than the manual one.

Moving inside, the N picks up a 10-inch infotainment system and a digital instrument panel that changes design with each drive mode, plus the Kona’s available head-up display. None of the above are available in the Veloster N. It naturally gets N-specific seats, steering wheel, shift knob, metal pedals and accents than your average Kona. Plenty of standard safety and convenience features are included, too, such as automatic emergency braking, lane-keep assist and centering, blind-spot monitoring, rear-cross traffic monitoring, adaptive cruise control and automatic high-beams.

Pricing and specific availability haven’t been announced, but it should arrive in time for the 2022 model year. Pricing will probably be comparable to the Veloster N, give or take a thousand or so. It won’t be the only N model to look forward to, either. Hyundai announced it plans to increase the number of N and N Line cars to 18 in total by the end of next year. We know a few that are coming, such as the Elantra, and Tucson N Line models, but that leaves room for a few more. Don’t count on a Santa Fe N or Palisade N, however, as Schemera put a pretty strong kibosh on those, indicating the company would want to put a stronger emphasis on more “eco-friendly” products (or at least more fuel efficient ones like the Kona). To that end, the company also strongly hinted that an all-electric N model is coming, specifically referring to the E-GMP platform. That could certainly mean a Hyundai Ioniq 5 N.

Joel Stocksdale and James Riswick contributed to this report

Auto Experthttps://automobiledot.com
As an Editor and an Automobile Geek, it's my pleasure to share my knowledge about Automobiles and their various aspects that can impact our lives.
Previous articleIs the BMW M2 CS the M Division’s Best Car?
Next articleF1 to introduce sprint race format for qualifying

The General put the Oldsmobile Division's head on the...
Read more
BMW