The tight uphill left-hander on Lime Rock Park’s go-kart track poses a challenge. The hill levels off at the top, which unloads the suspension, and that would almost certainly send the previous-generation Subaru BRZ’s tail sliding. The 2022 Limited model I’m driving sticks instead and that sends the car hurtling toward the next turn.

Subaru released the BRZ in 2012 as a light, low-powered starter sports car that drivers could send into controlled drifts. With the 2022 BRZ, Subaru takes a two-pronged approach. The base Premium model comes with carry-over Michelin Primacy HP passenger-car tires that easily let go of traction, but the Limited model now wears Michelin Pilot Sport 4 tires that grip the pavement.

The go-kart track is just part of the drive Subaru has arranged for the second-generation BRZ. The program also includes laps on Lime Rock’s 1.5-mile road course and time on the country roads of upstate New York and Connecticut. That’s where the ’22 BRZ proves it still has all the right moves, and then some. 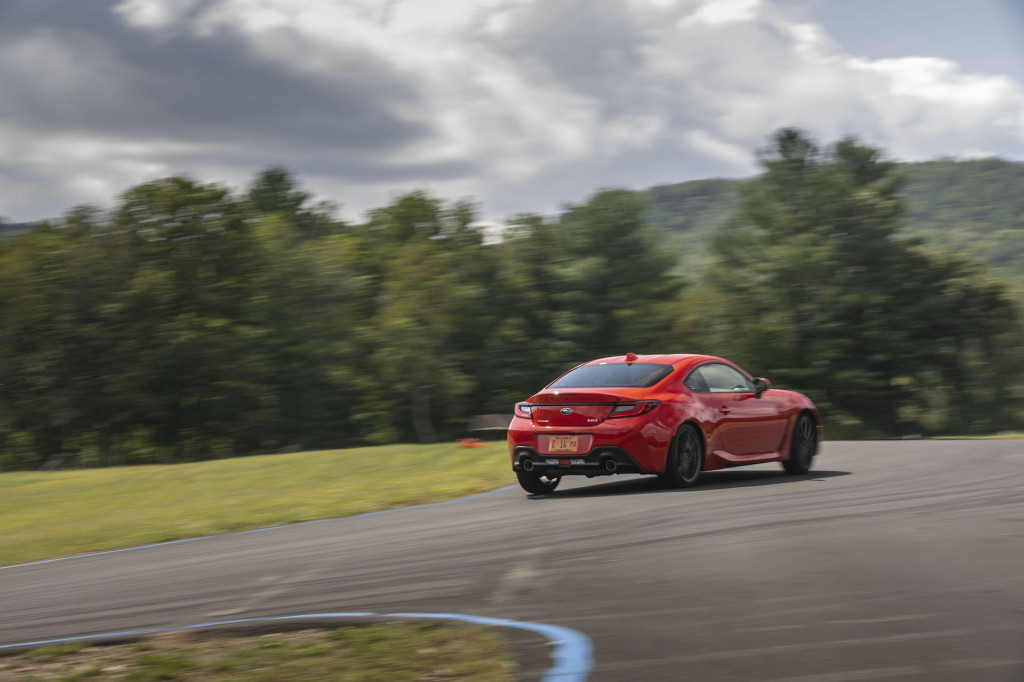 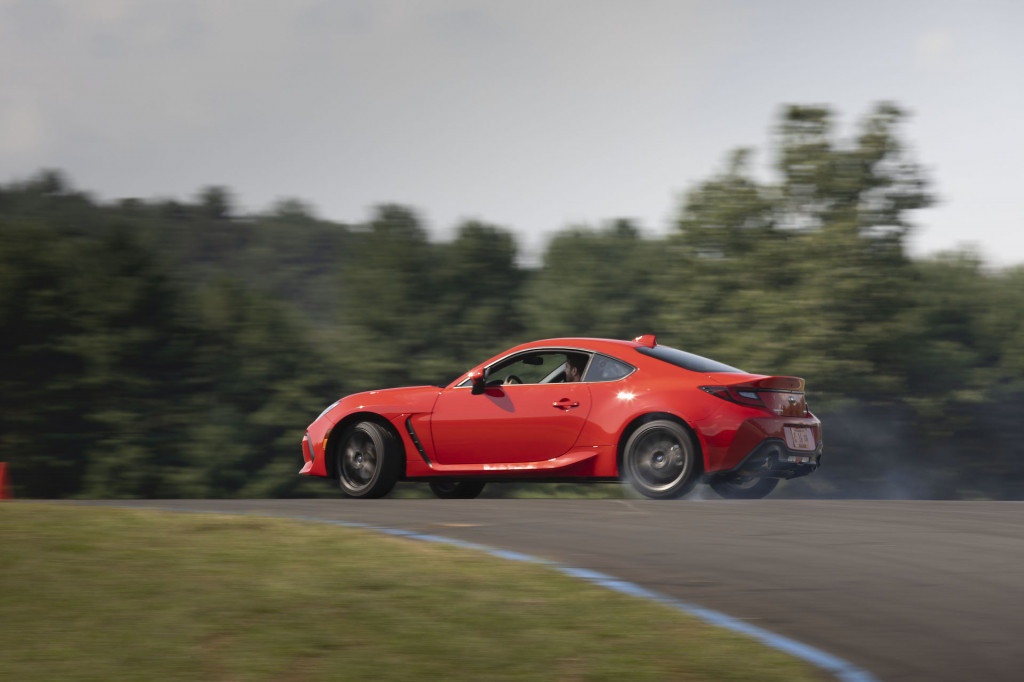 The autocross reveals the most about how the BRZ has changed. The BRZ remains the tossable, engaging car that Subaru and Toyota developed almost a decade ago (Toyota got the Scion FR-S, which later became the Toyota 86), but now it’s even more capable thanks to a significant refresh that gives it more power and grip, a stiffer structure, and an even lower center of gravity.

Set low to the ground and with a quick 13.5:1 steering ratio, the BRZ’s newly stiffer body reacts more quickly to steering inputs than the fabulous first generation. To firm up the body, Subaru used adhesives instead of welds on the inner frame structure, mounted the rear stabilizer bar to the frame instead of the subframe, thickened the front frame crossmembers, and improved the rigidity of the dampers and steering gear box. The efforts have resulted in 60% more front lateral rigidity and 50% more torsional rigidity.

A heavier engine and additional equipment threatened to add substantial weight, but Subaru offset most of it. The company used more high-strength steel in the body, substituted lighter materials in the interior and driveline, and switched to aluminum for the fenders and roof to cut 148 lb from the BRZ. As a result, the car gains just 17 lb to a base of 2,818 lb and the extremely low 18.1-inch center of gravity drops to 18.0 inches.

Subaru made changes to keep the rear end better planted beyond the stickier tires. Versus the outgoing model and the BRZ’s Toyota 86 twin, the new BRZ has 7% higher front spring rates, 11% lower rear spring rates, and a smaller 12-mm rear stabilizer bar instead of a 15-mm bar. These tweaks make the new BRZ more neutral in a turn, help it bite better up front, and keep the rear wheels stuck to the pavement. 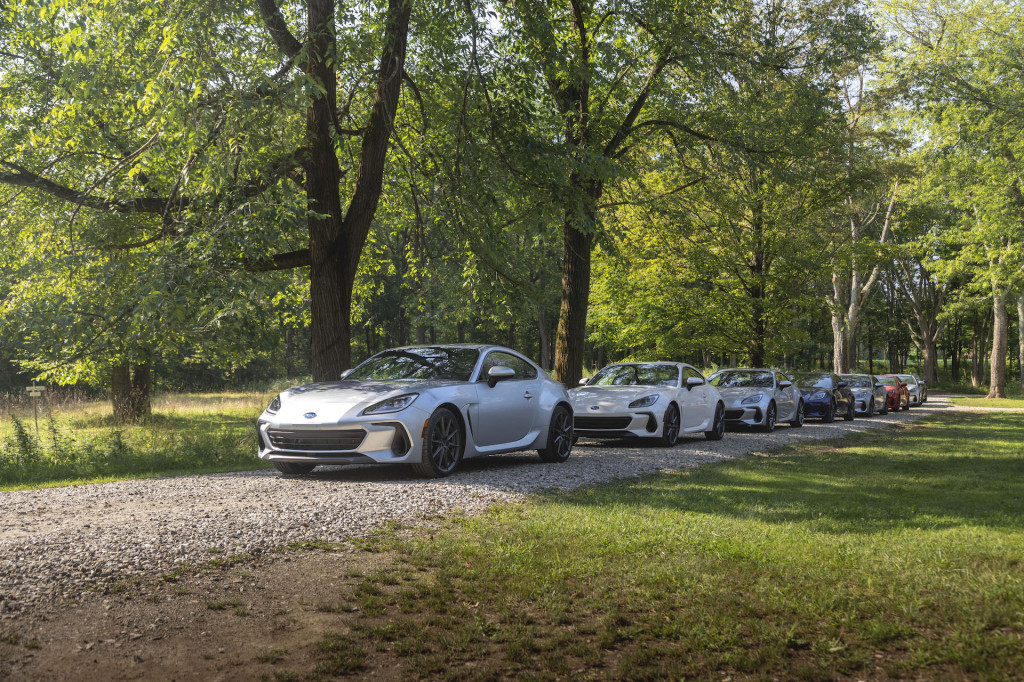 Through the autocross’s 180-degree first turn the Pilot Sport 4s start to sing as they near the edge of adhesion. The 53/47 front/rear weight ratio is nearly perfect, but the extra weight up front can make the car push through corners if overdriven. However, the feedback from the tires and a noticeable but controlled amount of body lean help me balance the car to keep it rotating, and a standard Torsen limited-slip rear differential locks down the power when the track straightens out.

That’s not to say the BRZ can’t still drift or turn with its rear wheels. It just takes more driver skill now to induce and maintain a drift. The base tires still give up grip rather easily, and the Pilot Sport 4s will too as they aren’t super sticky like the Pilot Sport 4S tires Subaru could have chosen.

More power also makes it easier to break loose the rear tires. The 205-hp 2.0-liter flat-4 gives way to a 2.4-liter engine from the Subaru Ascent though without its turbocharger (boo!). A Subaru engine, it uses Toyota’s D-4S direct- and port-injection system, which helps it produce 228 hp at 7,000 rpm and 184 lb-ft of torque at 3,700 rpm, up from 205 hp and 156 lb-ft of torque While the engine makes its best power at higher revs, its 28 extra lb-ft still aids the car’s ability to drift. 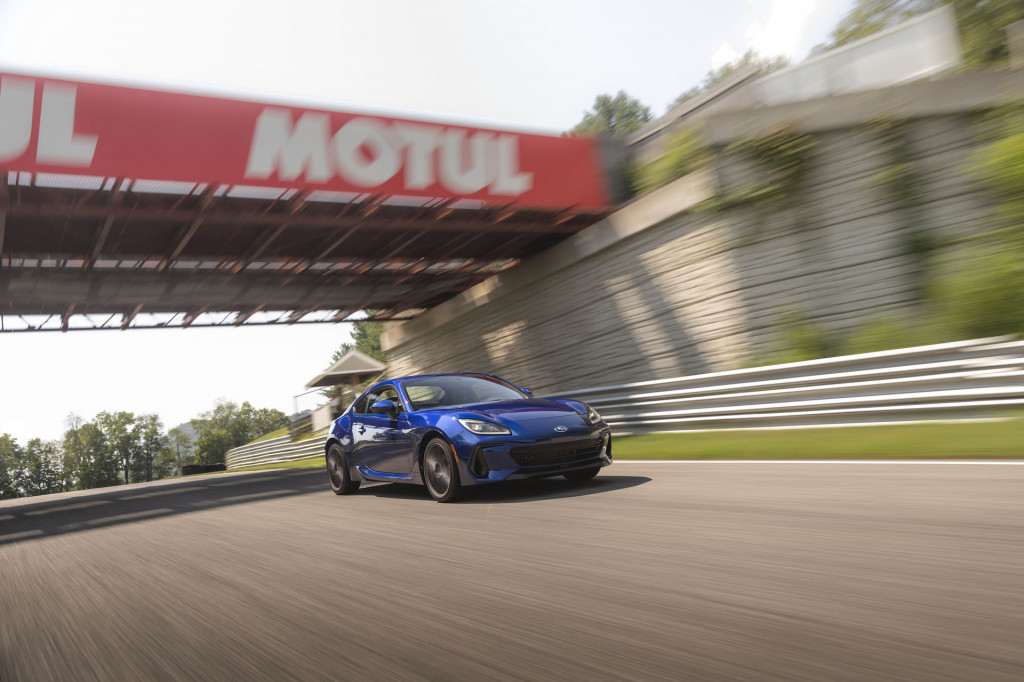 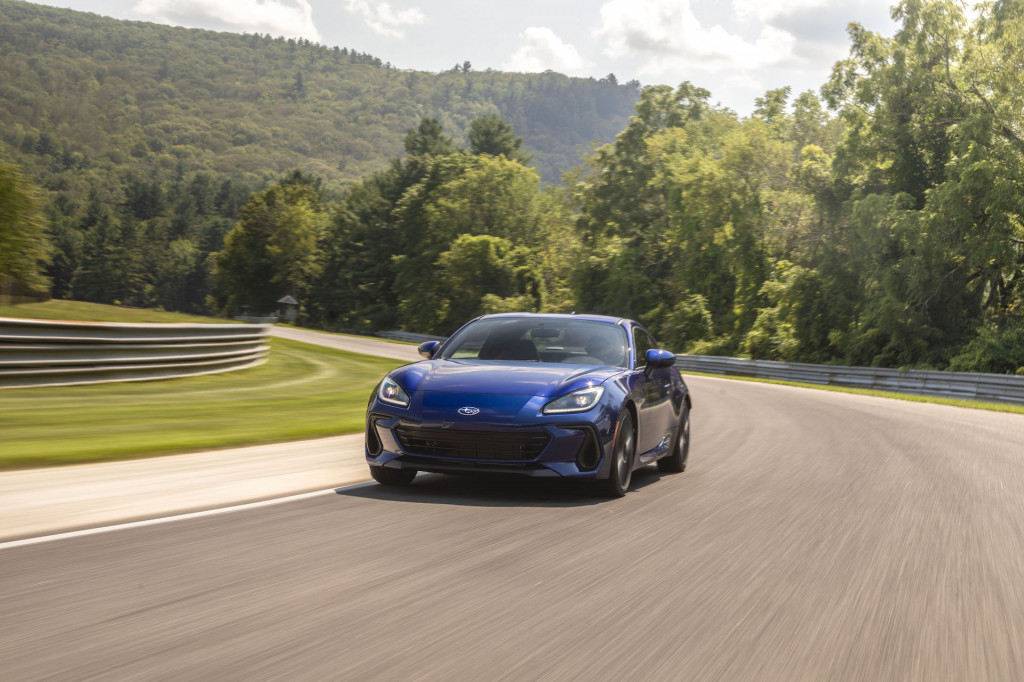 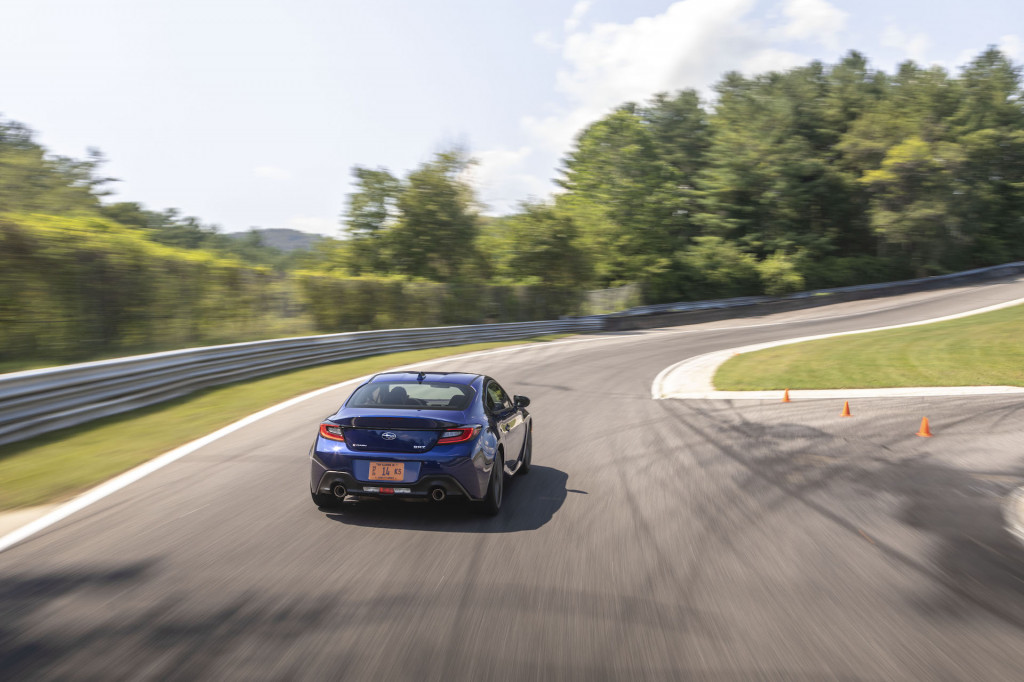 Other than a two runs of limited-edition tS models with stickier tires, the first-generation BRZ was never about lap times. Now, buyers can have it both ways.

The drive event includes track time on Lime Rock in cars with both the standard 6-speed manual transmission and the optional 6-speed automatic.

The extra power becomes immediately apparent. Like the fourth-generation Miata before it, the BRZ transforms from fun but slow to satisfyingly quick. The 0-60 mph time drops from 7.0 to 6.0 seconds with the manual and from 8.5 to 7.0 seconds with the automatic. The engine revs willingly and buzzes like a hive of wasps as it gets the car up to track speeds. The manual delights with short shifts that slot slickly into gear, and later in the session I learn that I can keep my right foot to the floor between shifts. It’s a technique made possible in the Cadillac CT4-V and CT5-V Blackwings by a fuel cutoff, but it also works here without causing the revs to climb between gears.

The automatic lacks the engagement and responsiveness of the manual, even in its Sport mode. Built by Aisin for Toyota, the automatic has two overdrive gears that create wide gear-ratio spreads in gears one to four. On the track, those spreads are too wide to keep the engine in its power band at higher speeds. The engine revs to 7,500 rpm, but the drop to 5,000 rpm slows acceleration and has me wishing for an extra gear in the No Name Straight between turns four and five. 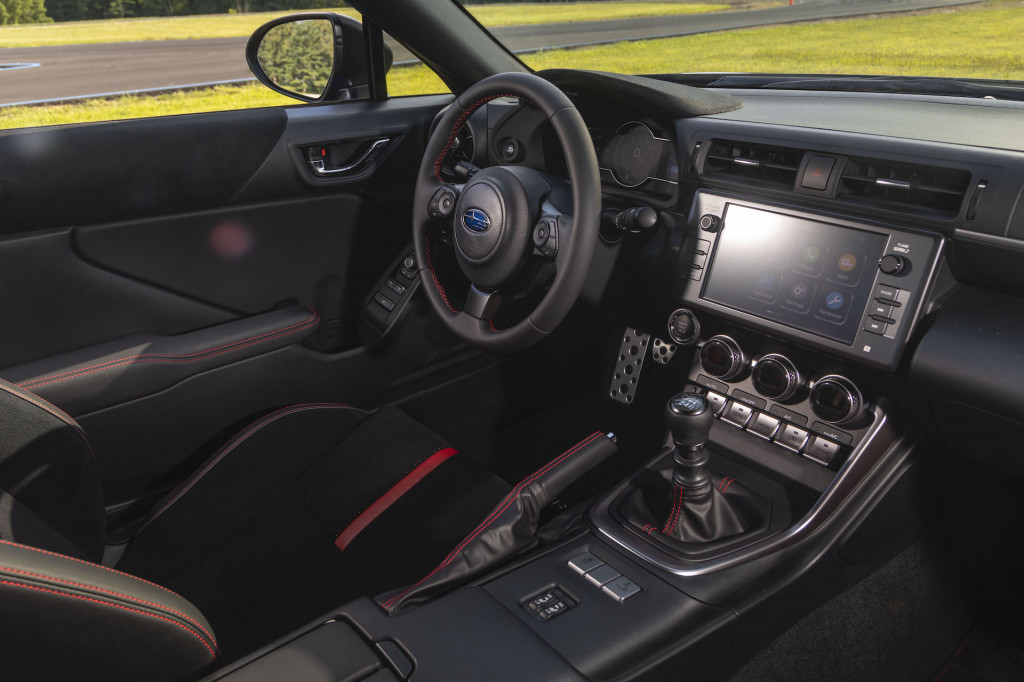 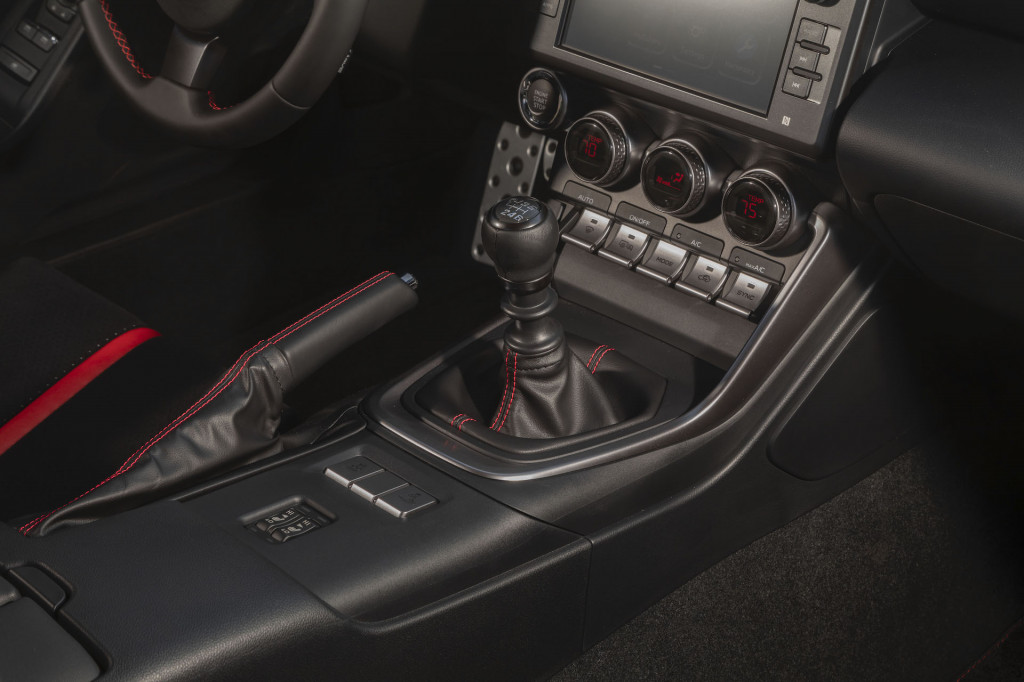 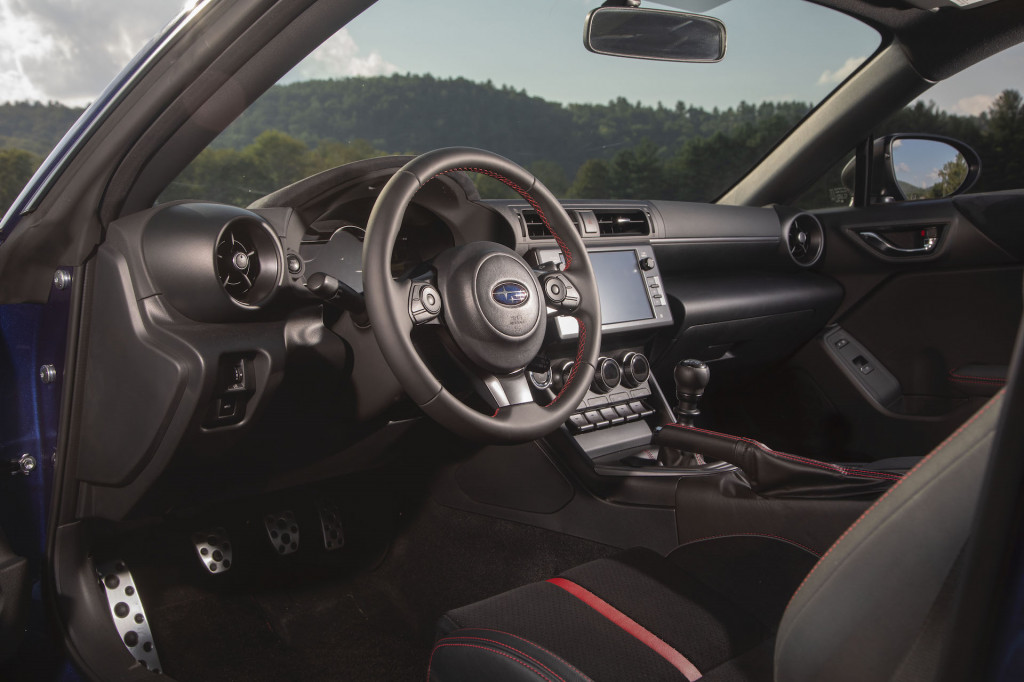 Otherwise, Lime Rock feels like it was made for the BRZ. The car turns sharply and the Pilot Sport 4s grip well. The car flows from corner to corner, and the engine’s modest power lets me keep the momentum going through most of the turns.

That’s a good thing because the BRZ doesn’t have track-day brakes. The 11.8-inch front rotors with 2-piston calipers and 11.6-inch rear rotors with single-piston calipers offer plenty of stopping power for the street, but the brake pedal starts to fade after a couple of laps that include hard braking from about 115 mph at the end of the front straight. They recover nicely with a cool-down lap, but anyone looking to track their BRZ should invest in bigger brakes, racing pads, or both. 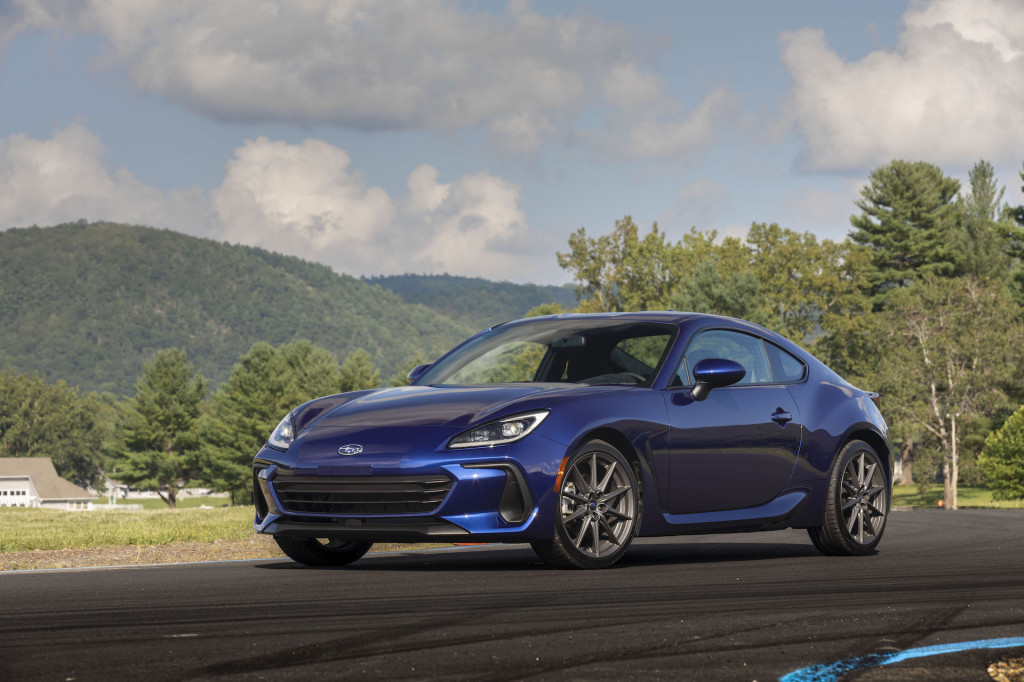 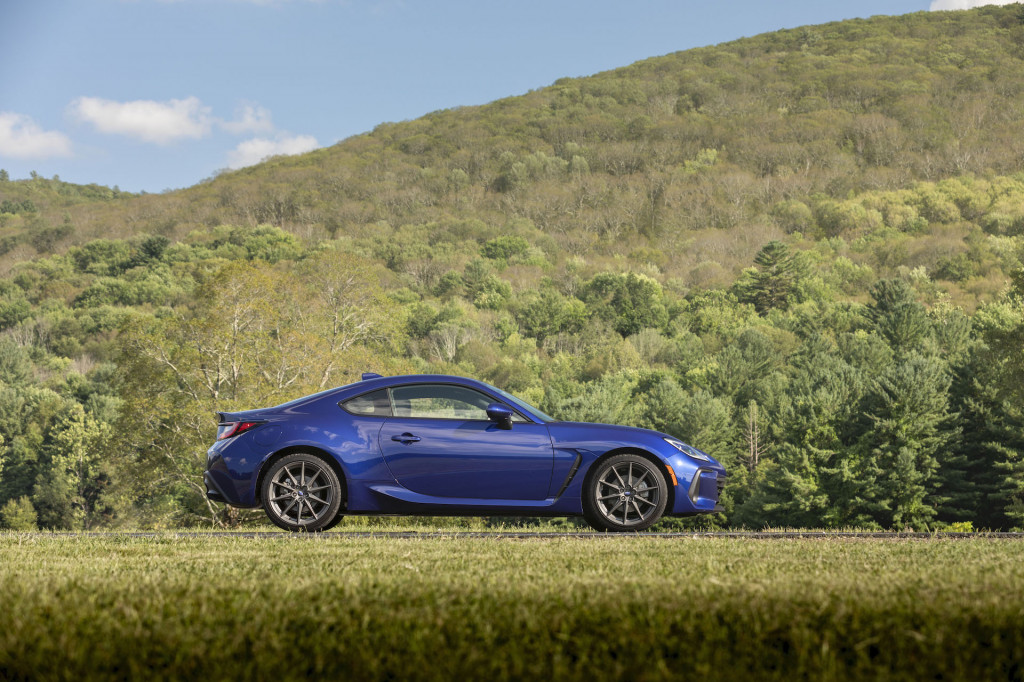 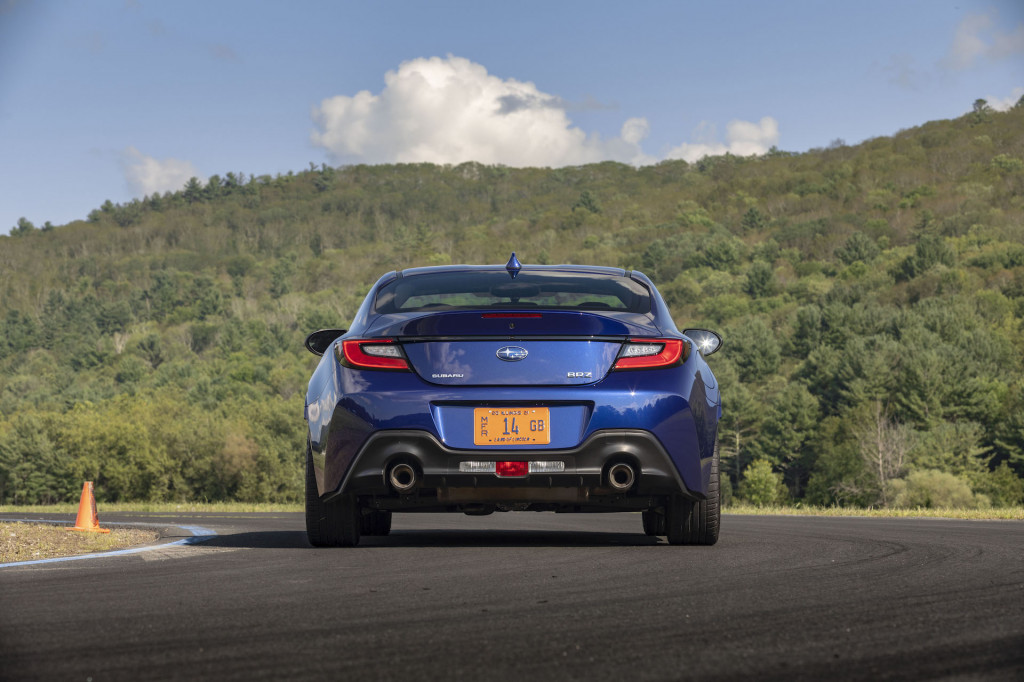 The fun extends to the street, where the feel from the chassis and steering makes every drive engaging. The suspension delivers a firm but comfortable ride, though one very sharp pothole showed that the Limited’s 215/40R18 tires lack enough sidewall to prevent bent rims. With limited though improved power, it’s still possible to experience much of the BRZ’s performance envelope on the street without breaking the law. The additional power also bumps up the automatic transmission’s viability slightly, moving from a nonstarter to a mere penalty. Choose the manual if you want to get the most out of the engine.

The car’s light weight negatively affects everyday driving. Subaru goes light on sound deadener, which lets in a lot of tire noise and allows the engine note to intrude on conversation. The hive of wasps sounds right on a track, but the drone wears thin on the street.

Subaru’s two-pronged performance approach is reflected in the model lineup, which consists of just the Premium and Limited models, both with the manual or automatic transmission. The drift-happy base Premium model costs $28,990 with the manual transmission, and comes with the Primacy HP tires on 17-inch alloy wheels, LED headlights, the latest Subaru infotainment system with an 8.0-inch touchscreen, an 7.0-inch configurable digital gauge cluster, Apple CarPlay and Android Auto, and satellite radio. The automatic bumps the price to $31,490, and adds automatic emergency braking, adaptive cruise control, and automatic high beams.

My choice would be the grippy Premium model with the manual transmission for $30,590. In addition to the 18-inch Pilot Sport 4 tires, it gets synthetic suede seat inserts, Subaru Starlink connected services, adaptive headlights, blind-spot monitors, and rear cross-traffic alerts. The Limited automatic runs $33,490, and gets those features plus the Premium’s driver-assist features.

The Subaru BRZ has always been a fun starter sports car, and it’s even better in its second generation. It’s faster and more agile, and now buyers can get it as the plucky drift toy it’s always been or as an autocross-ready runabout. The choice is yours: stick or slide.

Subaru paid for travel expenses so that we could bring you this first drive review.

Auto Experthttps://automobiledot.com
As an Editor and an Automobile Geek, it's my pleasure to share my knowledge about Automobiles and their various aspects that can impact our lives.
Previous articleBMW admits a new ‘high-end car’ will be built at Spartanburg
Next articleVideo: Generation gap – E90 M3 drag races G82 M4