WRX fans can exhale. The freshly unveiled 2022 Subaru WRX indicates the development team has not lost sight of what makes this car special. The designers did not imbue the thing with an outrageous grille or superfluous appendages to stimulate social conversations and generate shares. The new, fifth-generation WRX is sure to garner likes much as it always has, but now with a bigger 2.4-liter turbo boxer-four engine, a substantially improved chassis, vastly improved infotainment and a new outrageous color they call Solar Orange Pearl.

It would have been easy to hate the new shape if they had precisely followed the somewhat awkward contours of the 2022 Subaru Impreza sedan when they updated the new “Rex” to the Subaru Global Platform. But the WRX is far more pleasing because the nose and headlights are tidier, and its front fascia features familiar fog-light jowls at the corners. In back, the rear fenders, roof, doors and “magma” taillights flow together in a more cohesive way, and the fender stampings themselves have been resculpted to produce a haunchy, widebody stance that suits the car well.

Perhaps the most controversial new design element is the use of generous molded cladding along the side spats and the wheel-arch surrounds. The plastic’s specific texture is said to have a beneficial effect on aerodynamics because it prevents airflow separation that can add drag. That benefit seems minutely theoretical to us, but it’ll still be useful for hiding unsightly stone-chip damage if an owner invariably rallies theirs around in the dirt. This seems wholly appropriate considering the WRX’s rally heritage, even if the treatment does create a mildly clunky rear three-quarter view and make the orange one appear to be the Official Car of Halloween. 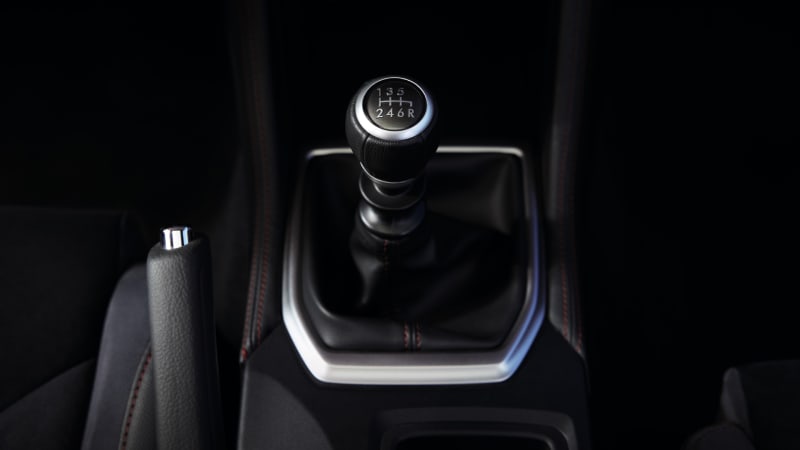 Much of this is beside the point to the WRX faithful, who hanker for an affordable, well-balanced all-wheel-drive sports sedan with a turbocharged boxer engine and, preferably, a manual transmission. This last point is surprisingly important to the WRX, because Subaru representatives told us that over 75% of the outgoing model was sold with the six-speed manual gearbox. Well, the manual is back as before, and it is once again the standard offering in the Base, Premium and Limited Trims. This car is highly favored among the save-the-manuals crowd, and will remain so in the future.

Despite this, Subaru seems intent on improving the performance and appeal of the optional CVT. Our hosts went out of their way to characterize the “Subaru Performance Transmission” (SPT) as an automatic transmission, which is fair enough because a CVT is a variety of automatic. But this is indeed a CVT, albeit a high-functioning one with a simulated eight-speed manual mode that can fire off crisp shifts so much quicker than last year that it comes across as a dual-clutch transmission. The SPT comes with a supplemental oil cooler when optioned in the Premium and Limited trims, and it is the sole offering in the new top-level GT trim. That’s top-level, for now, because they’re not talking about a new STI just yet.

The new GT, pictured above, doesn’t just differ from a Limited in terms of which transmission comes standard. You’ll also get grippy Recaro seats, matte-gray wheels, shift paddles, and multi-mode adaptive dampers – a WRX first. The steering effort and transmission shift aggressiveness are driver-selectable, too, and you can use a Drive Mode Select touchscreen menu to choose from different preset configurations or cook up your own individual setting. These features are only available on the GT, though, so you’d have to be willing to forgo the manual to get them.

Whichever transmission or trim level you choose, it’ll come bolted to a new 2.4-liter turbocharged four-cylinder boxer engine. Aside from the larger displacement, this engine also features a turbocharger with an electronic wastegate. The end result is hard to judge by looking at the specs, because on paper the new engine only makes 3 extra horsepower (271 versus 268, both at 5,600 rpm) and generates the same 259 pound-feet of torque over the range of 2,000 to 5,200 rpm in both cases. Subaru representatives are quick to point out that the power and torque curves are both broader and flatter outside of these peak values, which does ring true considering the extra 400cc of displacement. 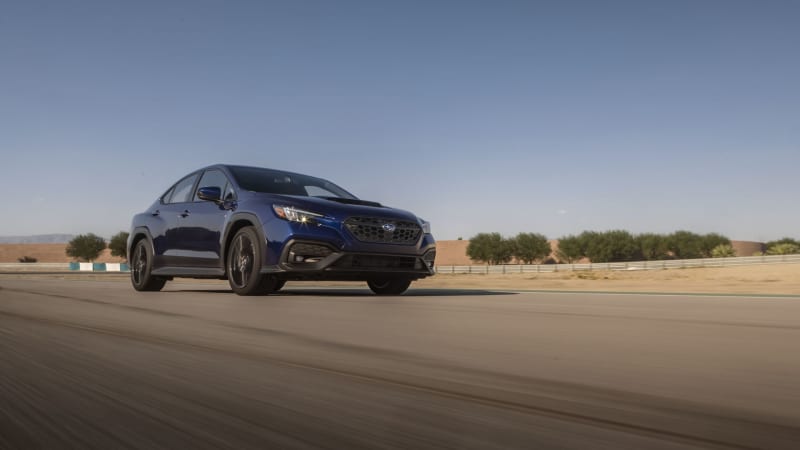 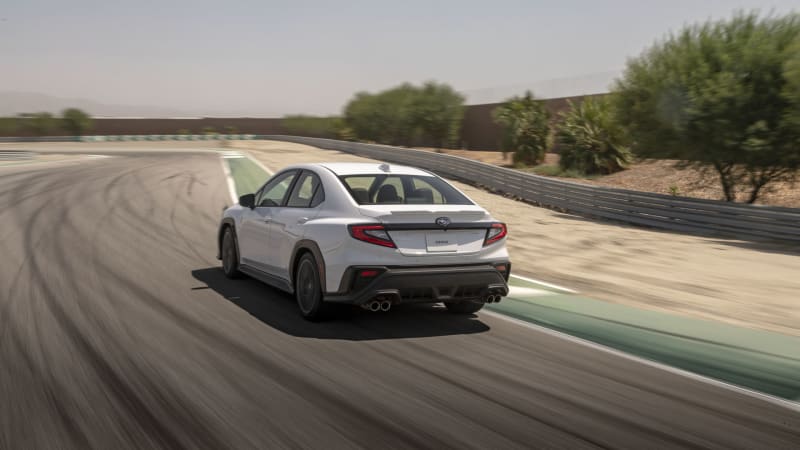 No driving was allowed at this event, so the only way we got a sense of this was by donning a helmet and riding shotgun around a racetrack with former Formula One driver and current Subaru rallycross ace Scott Speed. The engine did pull hard and felt like it was not the least bit peaky, and both the new ultra-suede seats in the Limited (replacing leather) and the Recaros in the GT kept a firm enough grip. There was no need to seek out a grab handle as Speed hurtled headlong through the corners. The SPT shifts in the GT did indeed feel as seamless as a good DCT, and the car gobbled up the apex curbs equally well whether we were in a GT equipped with adaptive dampers or the Limited with its fixed-valve dampers.

The car seemed to attack the corners with nary a whiff of understeer, but that could easily have been Mr. Speed’s immense skill shining through. It’s a pity we couldn’t sample it ourselves, because the WRX’s new skin hides many changes we could only assess from behind the wheel. The body structure itself, for starters, is some 30% stiffer in torsion, a trait that should make the suspension respond far more predictably. There’s also 20% more front roll stiffness owing to a new direct-acting stabilizer bar that bolts to the strut instead of the lower control arm. A new dual-pinion electric power steering rack should improve steering feel, because the steering linkage connects wheel to rack directly this time out, with the assist added from a second pinion at the rack’s opposite end.

All of this rolls on the same tire sizes as last year: 235/45R17 tires on the Base model, and 245/40R18 tires on the Premium, Limited and GT. All of them are Dunlop SP Sport Max GT summer tires, so if you live where it snows you should plan to buy a set of extra wheels and winter tires. 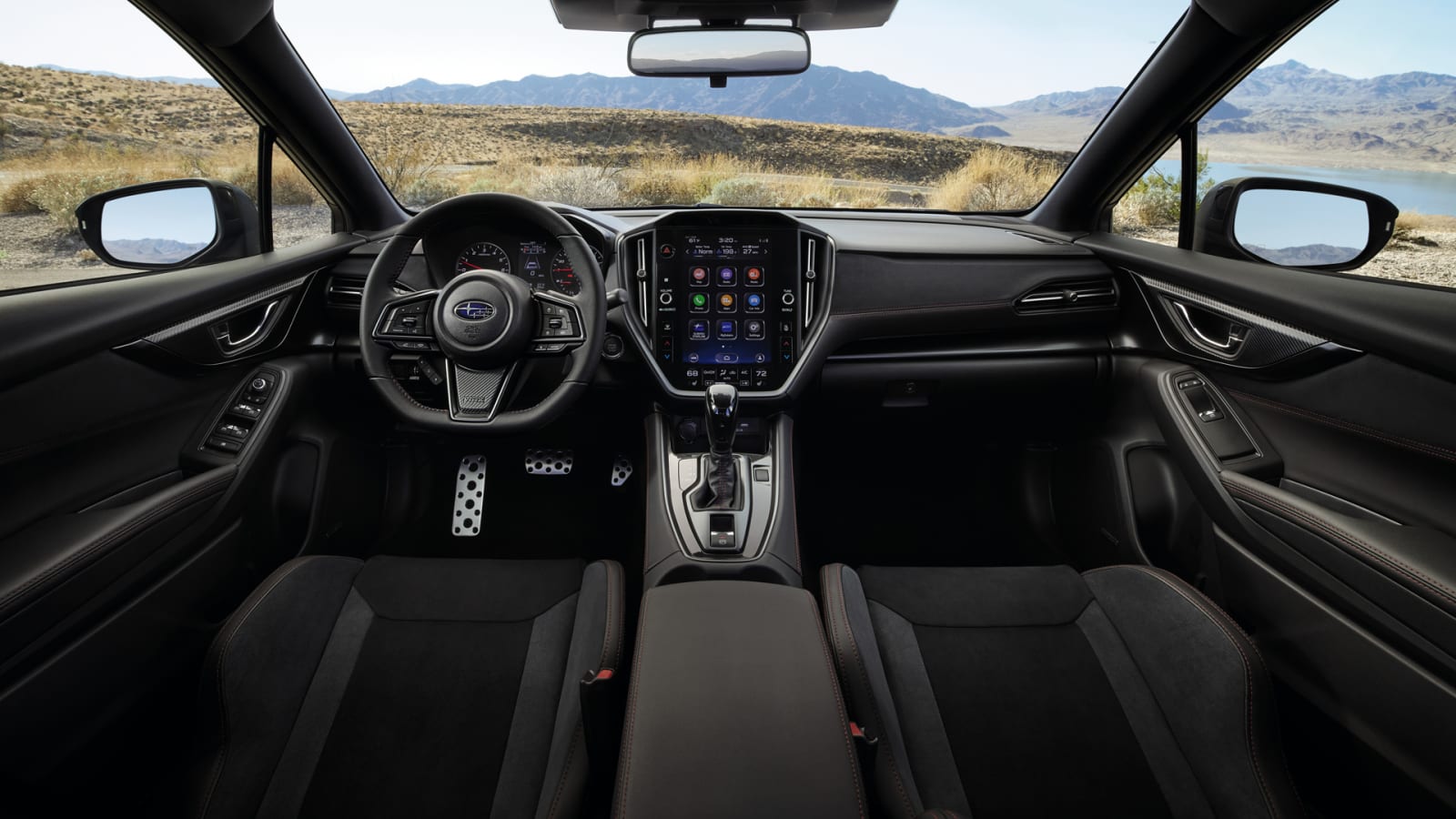 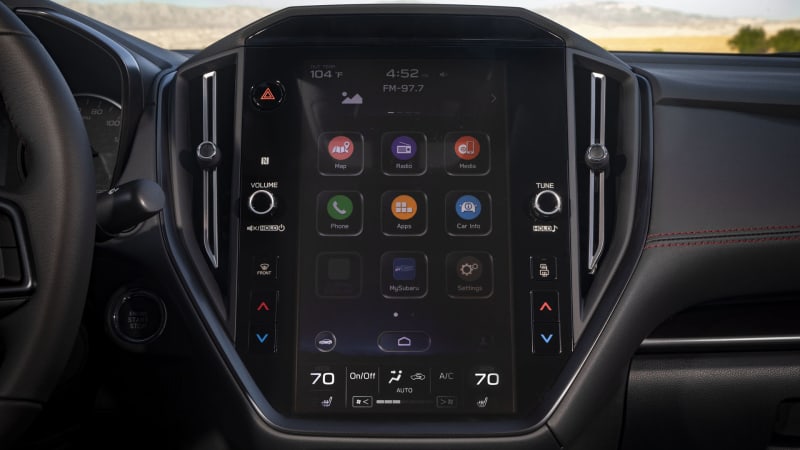 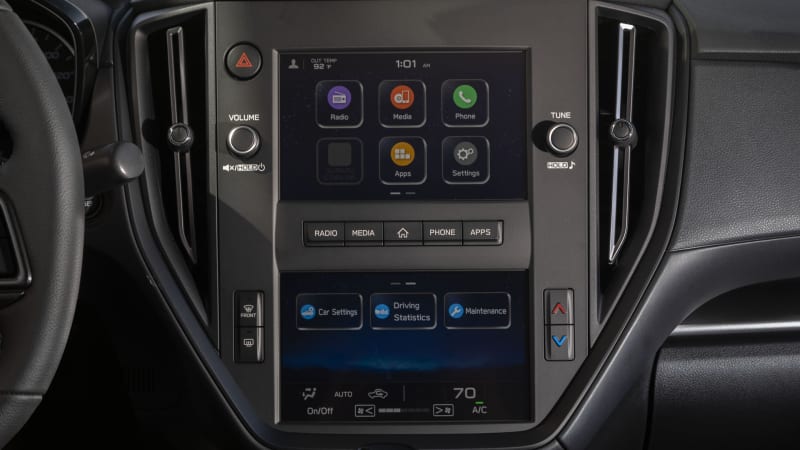 Inside, a new 11.6-inch portrait-oriented tablet-based infotainment system is found in all trim levels but the Base, which gets a dual-screen set-up. They’re the same offerings as the Outback. With the big screen, there are numerous physical knobs and buttons for the most essential functions, so it’s not touchscreen-heavy to the point of frustration. The GT version is connected to a high-end Harman Kardon stereo, and even the Base model without the huge 11.6-inch screen can support Apple CarPlay and Android Auto. Spacewise, the height-adjustable seat and tilt-telescope wheel make it a cinch to find an agreeable driving position, and the extra rear legroom of the Impreza-esque Subaru Global Platform made it easy for 6-foot 2-inch me to sit behind myself.

Detailed specs such as the new WRX’s weight and its fuel economy ratings will not be released until we get closer to the start of production in January 2022. The actual horsepower and torque curves would be nice to see, but final calibrations may not yet be complete. We couldn’t feel the power and torque differences for ourselves this time out, and the precise feel of the steering, handling and ride are still a big unknown. But the WRX looks great in person, and what we did learn in our walkaround and feel in our shotgun ride-along gives us a lot of confidence that the WRX fans of North America will not be disappointed when the 2022 Subaru WRX goes on sale here next January or February, chips permitting.

Auto Experthttps://automobiledot.com
As an Editor and an Automobile Geek, it's my pleasure to share my knowledge about Automobiles and their various aspects that can impact our lives.
Previous articleHere’s a BMW iX parking and going to the car wash by itself
Next articleRefreshed 2022 Mazda CX-5 leaks in China

As surprising as it may seem, we’re getting...
Read more