In the beginning, buying an SUV almost certainly meant you were going to be buying a midsize SUV. Early models like the Explorer, Blazer, Grand Cherokee, Pathfinder and 4Runner are the reason a niche, off-roading vehicle segment morphed into the bread-and-butter family transportation choice and then spawned numerous offshoot segments based on size, capability, performance and luxury.

All those different directions can be easily seen in today’s selection of midsize SUVs (most of which are technically crossovers), including the current versions of those SUV pioneers. There are the three-row family haulers that consumers happily gobble up instead of minivans. There are two-row, style-oriented choices like the Chevy Blazer, Nissan Murano and Volkswagen Atlas Cross Sport that are resolutely intended to stay nice and clean on-road. On the opposite end, there are the old-school, body-on-frame, definitely-not-a-crossover Jeep Wrangler and Toyota 4Runner. Between the two resides the versatile Jeep Grand Cherokee. And then you have segment-bending oddities that don’t exactly fit into a single category like the Kia Sorento and Subaru Outback. Oh, and lots and lots of luxury choices, though we’ll save those for another list.

So here is our list of the best midsize SUVs, broken into two- and three-row choices, then listed alphabetically.

Why it stands out: More third-row and cargo space; well-executed tech; high-style interior
Could be better: No hybrid or performance version

The Hyundai Palisade is mechanically related to the Kia Telluride, and choosing between this pair of masterfully executed family haulers could basically come down to a coin flip. Or, more realistically, which you think looks better. For its part, the Palisade has a more luxurious vibe, which is most obvious in its Limited (pictured above) and Calligraphy trim levels that could easily compete with actual luxury-brand SUVs. The main reason for this is the stylish, well-made cabin that not only looks great, but boasts useful storage, user-friendly infotainment tech and more space than nearly every competitor — bigger kids and even adults will be perfectly comfortable in the third row, and you can fit more stuff behind the raised third row. Hyundai’s driver assistance and safety tech is also among the best-executed in the industry. If there’s a major hole in its game, it’s the lack of a hybrid powertrain or a more powerful version. 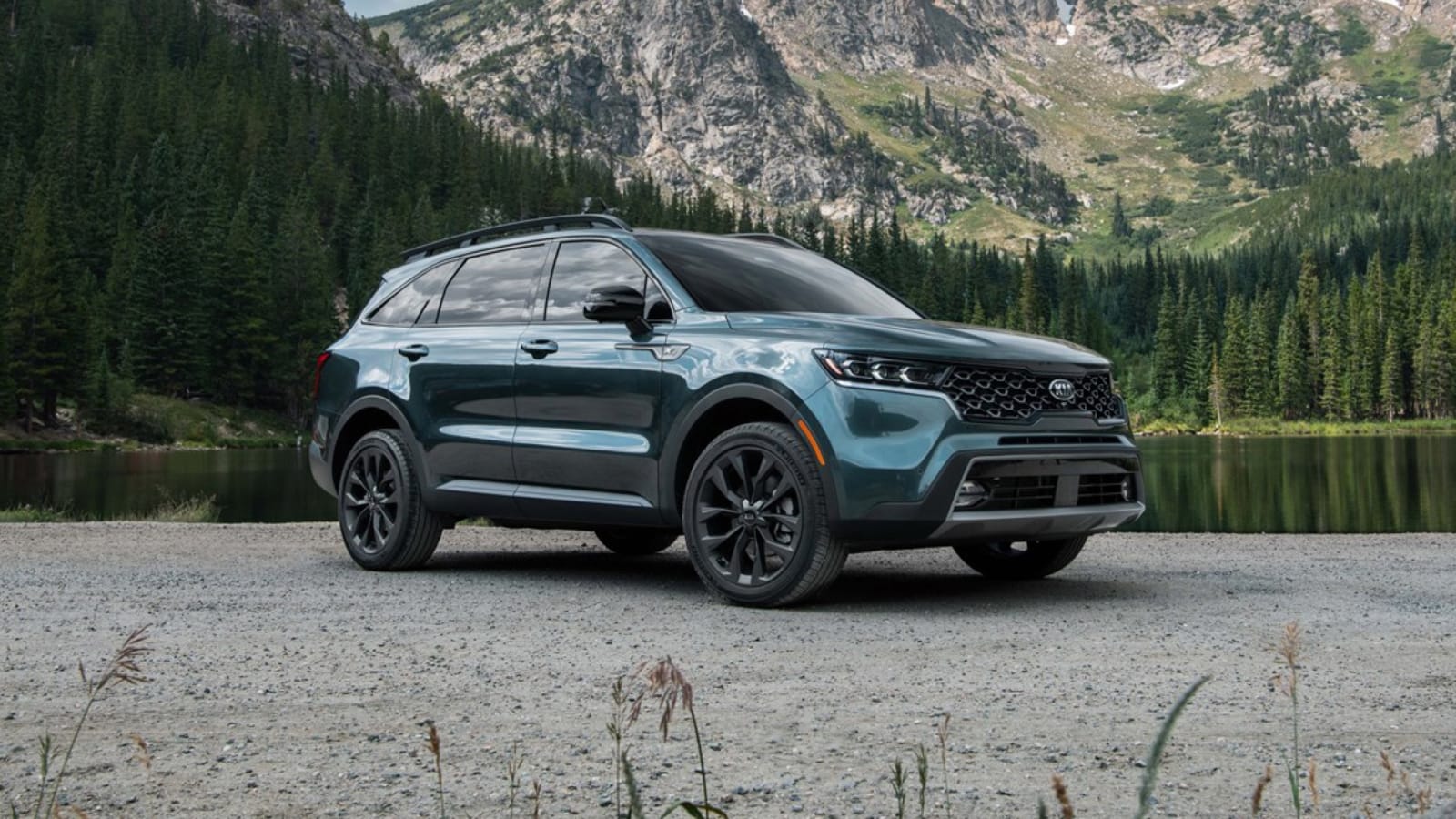 The Kia Sorento basically has the exterior dimensions of a two-row midsize SUV, but manages to sandwich in a third row for those who could foresee needing one on occasion, but not frequently enough to warrant driving around a bigger, thirstier and pricier vehicle like Kia’s Telluride. We think this versatility gives the Sorento a leg up on two-row crossovers like the Honda Passport and Chevy Blazer, while its smaller size is bound to appeal to those who don’t view bigger as necessarily better. And for its part, the 2021 Kia Sorento is appealing for myriad other reasons. Completely redesigned for 2021, it features revised styling in keeping with but not copying the successful Telluride. There are even slightly different styling flavors, including the sportier SX Prestige and more rugged X-Line (pictured above). Inside, material quality is elevated, the design is handsome and technology is not only abundant, but user friendly. The same well-executed driver assistance and safety features that so impress in the Palisade and Telluride are also available in the Sorento. And finally, the Sorento benefits from a full menu of fuel-efficient powertrains: the admittedly meager 191-horsepower base engine, the powerful turbo upgrade that’s more efficient than the V6s of most competitors, the 37-mpg traditional hybrid and the late-availability plug-in hybrid. 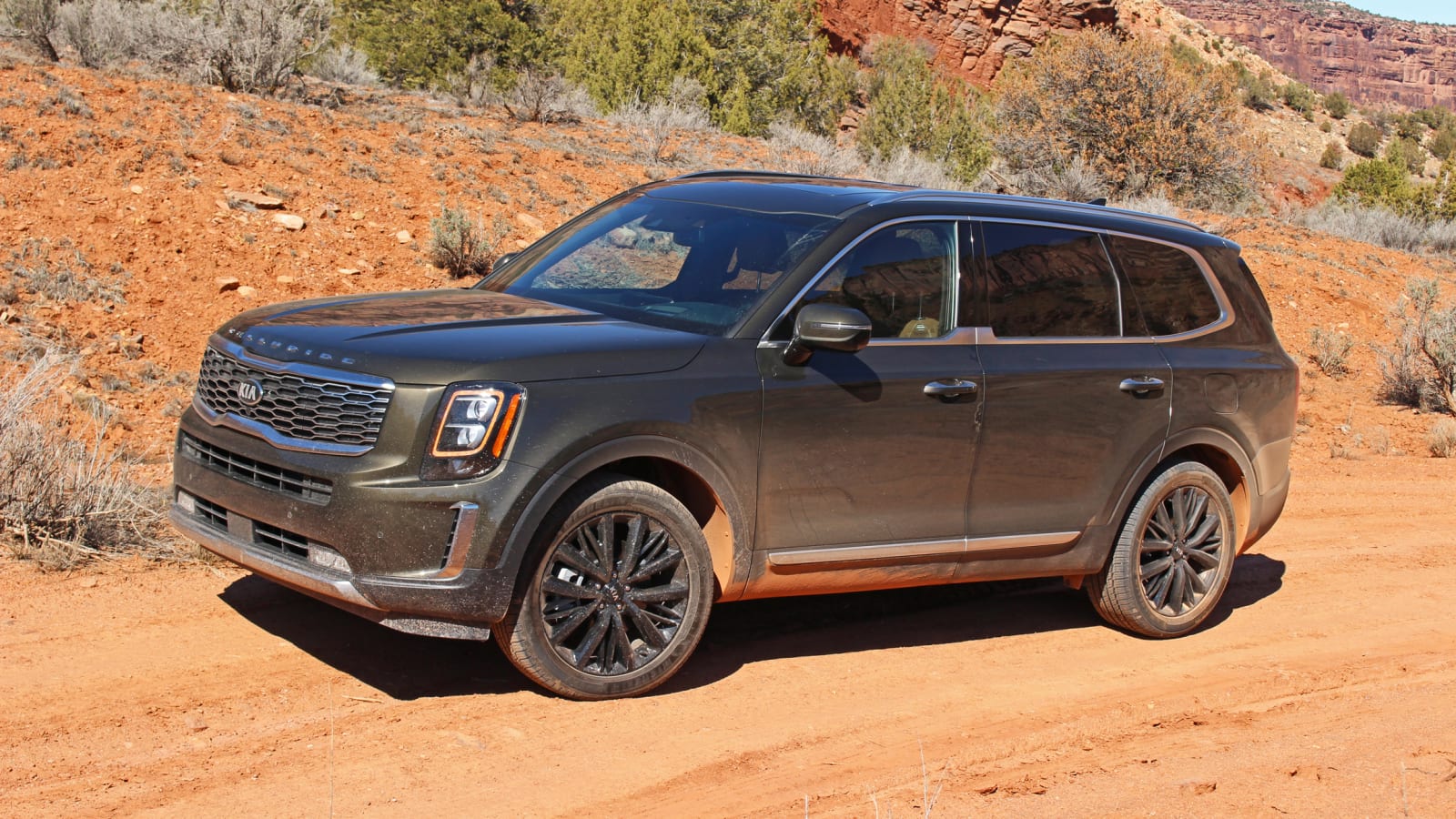 Why it stands out: More third-row and cargo space; well-executed tech; well-made interior; doesn’t look like a family hauler
Could be better: No hybrid or performance version available

If you’ve already read the above description of the Hyundai Palisade, you’ve already been briefed about its mechanical commonalities with the Telluride and that they share the same fundamental strong points: space, technology, quality and value. They also do so to an extent that outpaces their competitors. Of the two, the Kia Telluride has received the greater share of accolades, largely because its styling seems to resonate with more people. Basically, style is the tie breaker. There’s more than a whiff of Range Rover to its blocky proportions and restrained detailing. Heck, “Telluride” is even written across the hood, much like a Range Rover would be. Basically, the Kia Telluride doesn’t look like a three-row family hauler despite being one of the best three-row family haulers. Win-win. 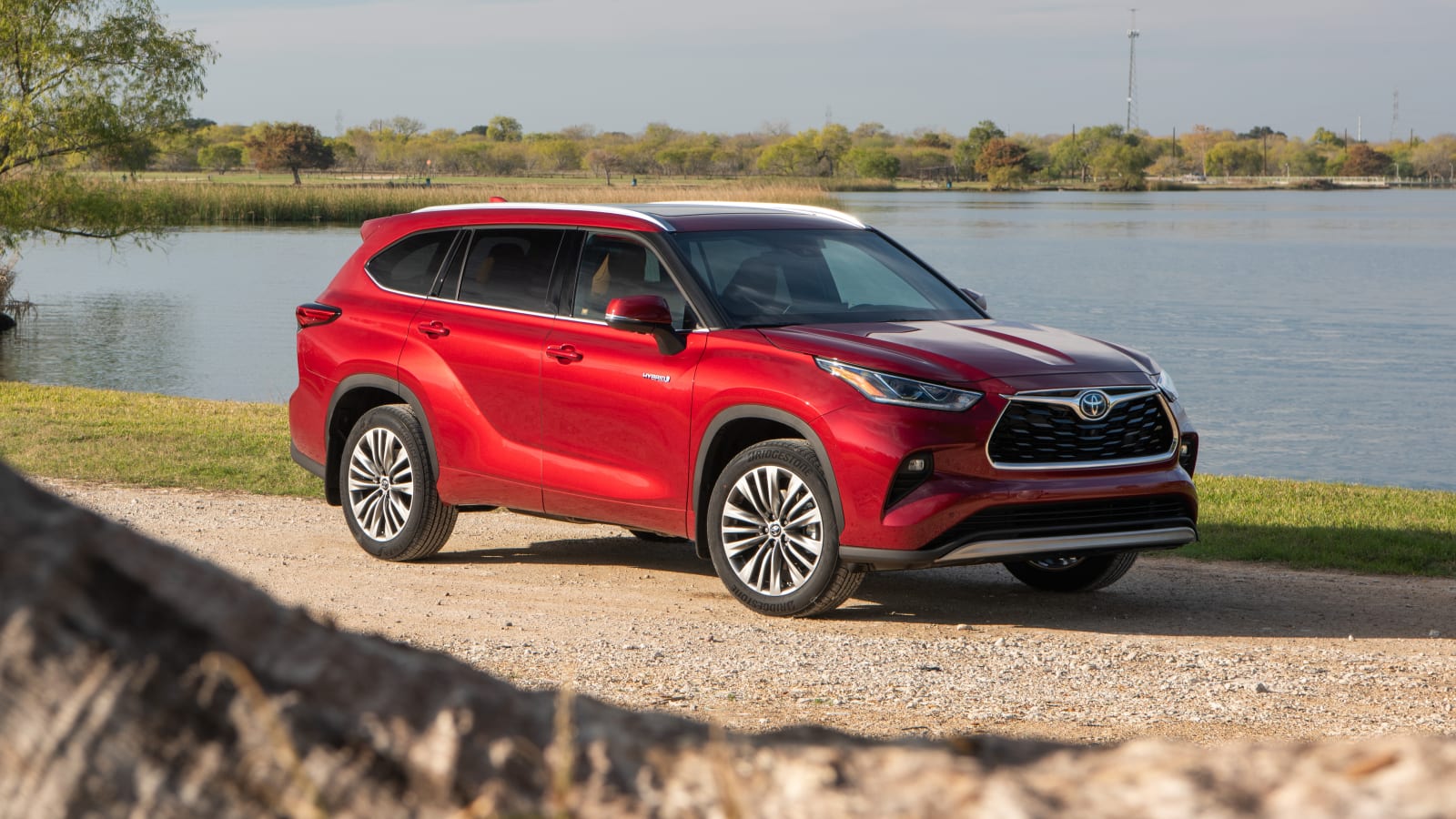 Why it stands out: Best fuel economy in its segment by many miles; high-end interior
Could be better: Cramped third-row seat; sluggish and simplistic infotainment

The Telluride and Palisade might be excellent, class-leading three-row crossovers, but their fuel economy is simply average for the segment at 21 mpg combined. The Toyota Highlander Hybrid, on the other hand, gets 35 mpg combined. That difference is as massive as it seems. Besides the environmental benefits, you will save an average of $850 per year at the pump with the Highlander Hybrid, according to the EPA. When you consider it costs only $1,400 more than a comparable V6-powered Highlander, you’re looking at an incredibly quick payback time. True, it has only 243 horsepower, which means it’s on the slow side for the segment, but considering how most people drive their three-row family haulers, we think the 14-mpg advantage will more than make up for that. Besides its fuel economy, though, the recently redesigned Highlander is appealing in its own right with Palisade-rivaling interior quality, composed ride and handling, and ample feature content. If there’s reason for pause, it’s the rather cramped third-row seat. Toyota says its customers were content with the Highlander’s smaller-than-average size and therefore didn’t expand it greatly, but there’s no ignoring that most three-row midsize SUVs are bigger. The exception? The Kia Sorento, which is smaller on the outside but not that different in the third row. It’s also the only other three-row, non-luxury SUV available as a hybrid. 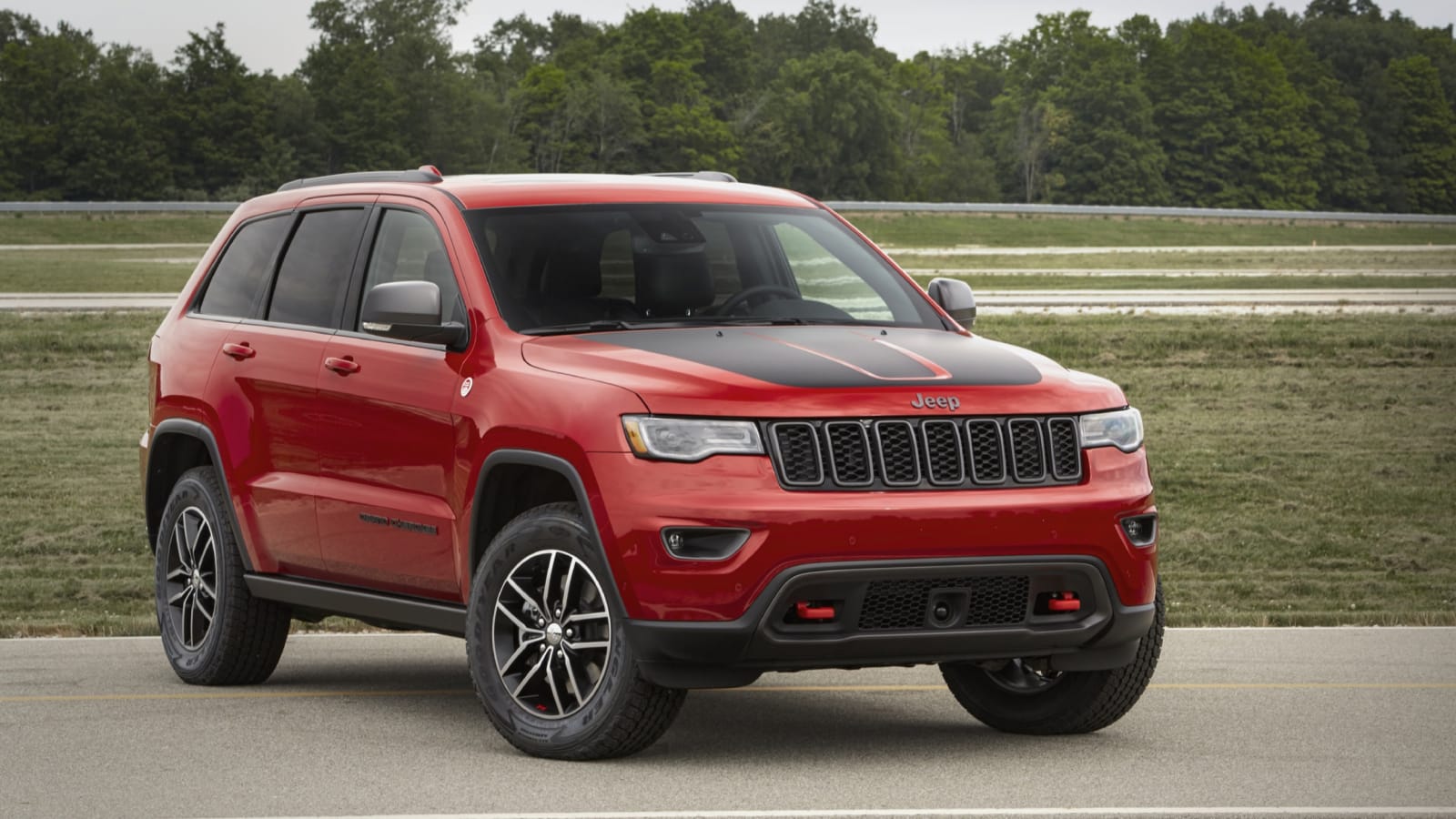 Why it stands out: Off-road capability; towing capacity; user-friendly tech; variety of models
Could be better: Meager performance from base V6; old and about to be replaced; interior space

Sure, it’s been around forever and is about to be replaced by an all-new model. Nevertheless, the Grand Cherokee soldiers on as a top pick among two-row midsize SUVs because it offers a unique mix of attributes. Whereas other two-row midsizers like the Honda Passport and Ford Edge offer questionable value compared to three-row models that cost a pittance more, the Grand Cherokee has clear advantages over the family haulers. It has genuine off-road and towing capability, plus numerous engine upgrades (including the truly absurd 707-horsepower Trackhawk) and styling that most definitely avoids the family hauler look. It’s also more refined, efficient and modern than the other go-to off-roading midsizer, the Toyota 4Runner. Although we haven’t tested the all-new, three-row Grand Cherokee L, its excellent two-row predecessor is a good sign for things to come. 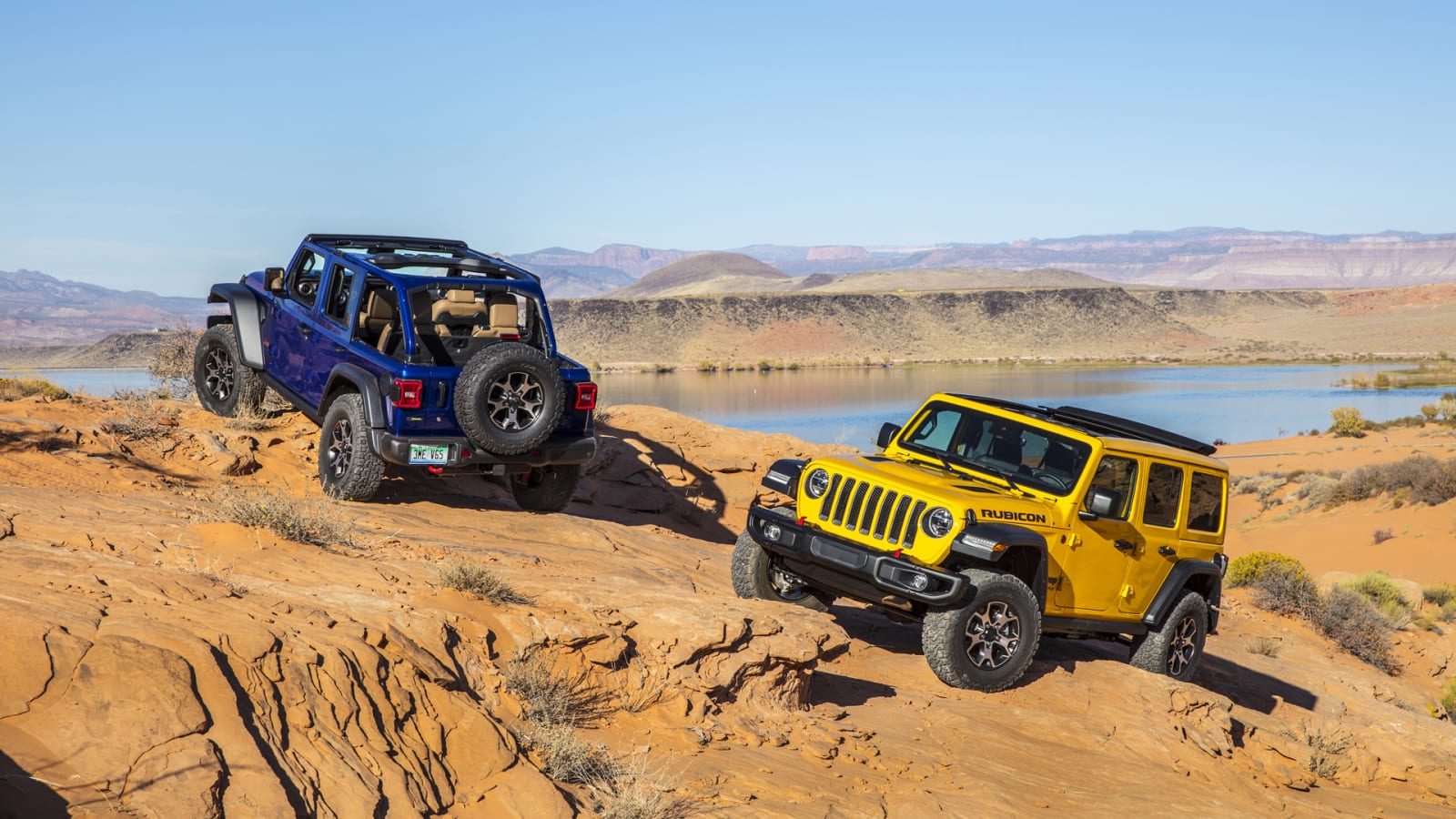 The Wrangler isn’t really a competitor for any of the above midsize SUVs, and we definitely don’t recommend it as a family vehicle. In fact, we are quick to point out the Wrangler’s innumerable practical drawbacks: handling, ride comfort, interior noise, safety ratings, fuel economy, cargo space, windows that come undone with a zipper. … Basically, think long and hard about whether you can live with these drawbacks to what is otherwise a masterful off-roading SUV. Available in two- and four-door body styles, five engine options (including the plug-in hybrid 4xe and 470-horsepower Rubicon 392), multiple hard- and soft-top roof styles, and numerous trim levels and special style packages, there’s bound to be a Wrangler for everyone. Heck, there’s also the Jeep Gladiator pickup. Ultimately, we recommend the Wrangler because despite those many drawbacks, this latest generation is in fact far more refined and livable than past generations. A Honda Passport it isn’t, but it’s now unlikely to beat up your spine, blow out your ears and confuse your hands with spooky steering. 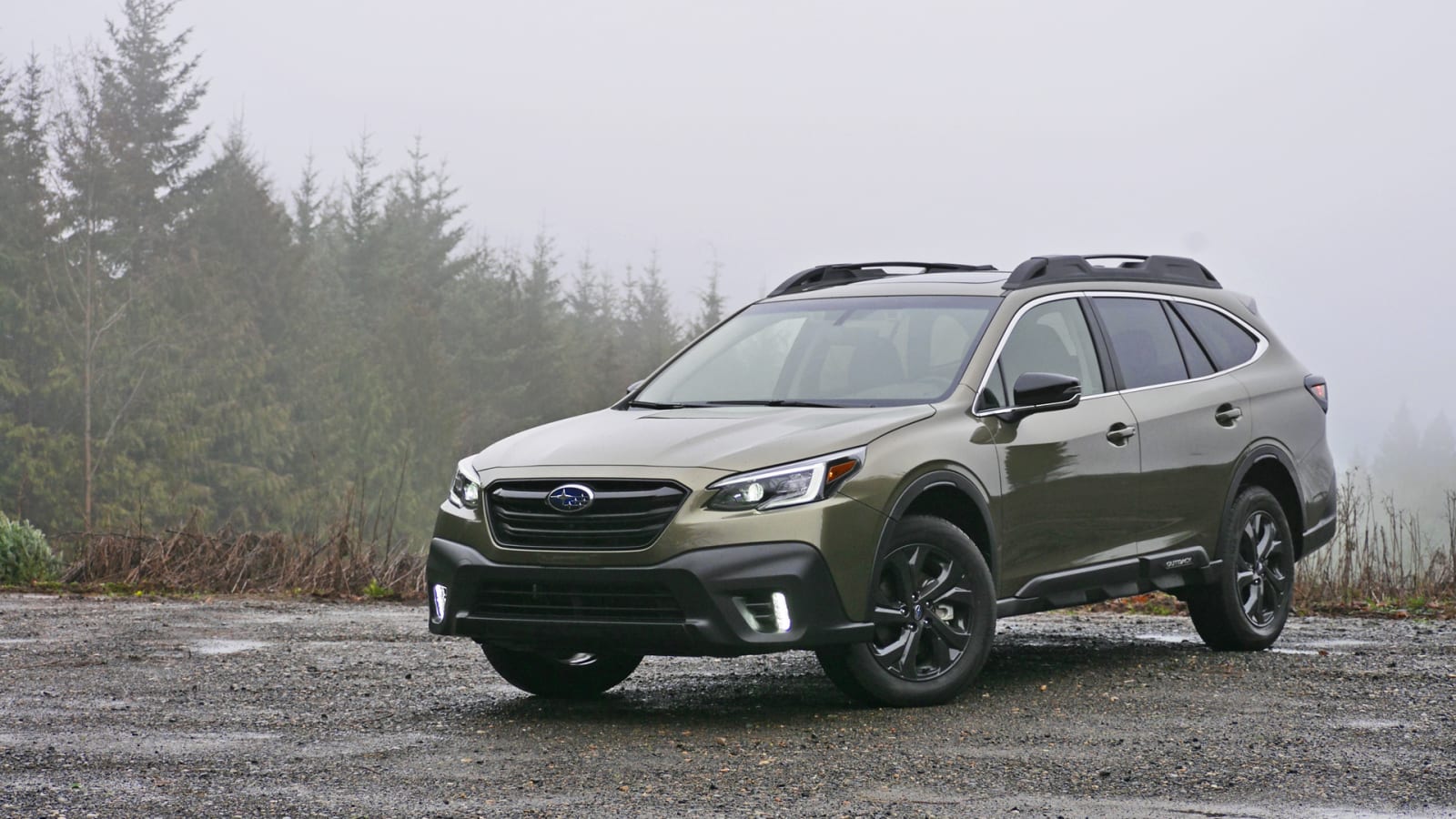 Why it stands out: More space and ground clearance than other midsize crossovers; fuel economy; easy-to-load roof racks
Could be better: The droning CVT; boring to drive; hyper-vigilant driver assistance tech

You’re right, the Outback isn’t technically an SUV. But then, everything else on this list except the traditional, body-on-frame Wrangler and 4Runner aren’t technically SUVs, either. They’re crossovers that feature car-like unibody construction — just like the Outback. And despite looking like a wagon, it has more ground clearance, more cargo capacity, more back seat space and better fuel economy than most other midsize crossovers. It’s a genuinely sensible and usable vehicle, especially for those who actually like to take their vehicles off the beaten path (versus those who just like to project the appearance of such weekend adventures). Throw in its abundance of safety and infotainment tech, standard all-wheel drive, solid reliability ratings and improved interior quality with its most recent redesign, and you have a vehicle that’s easy to recommend. 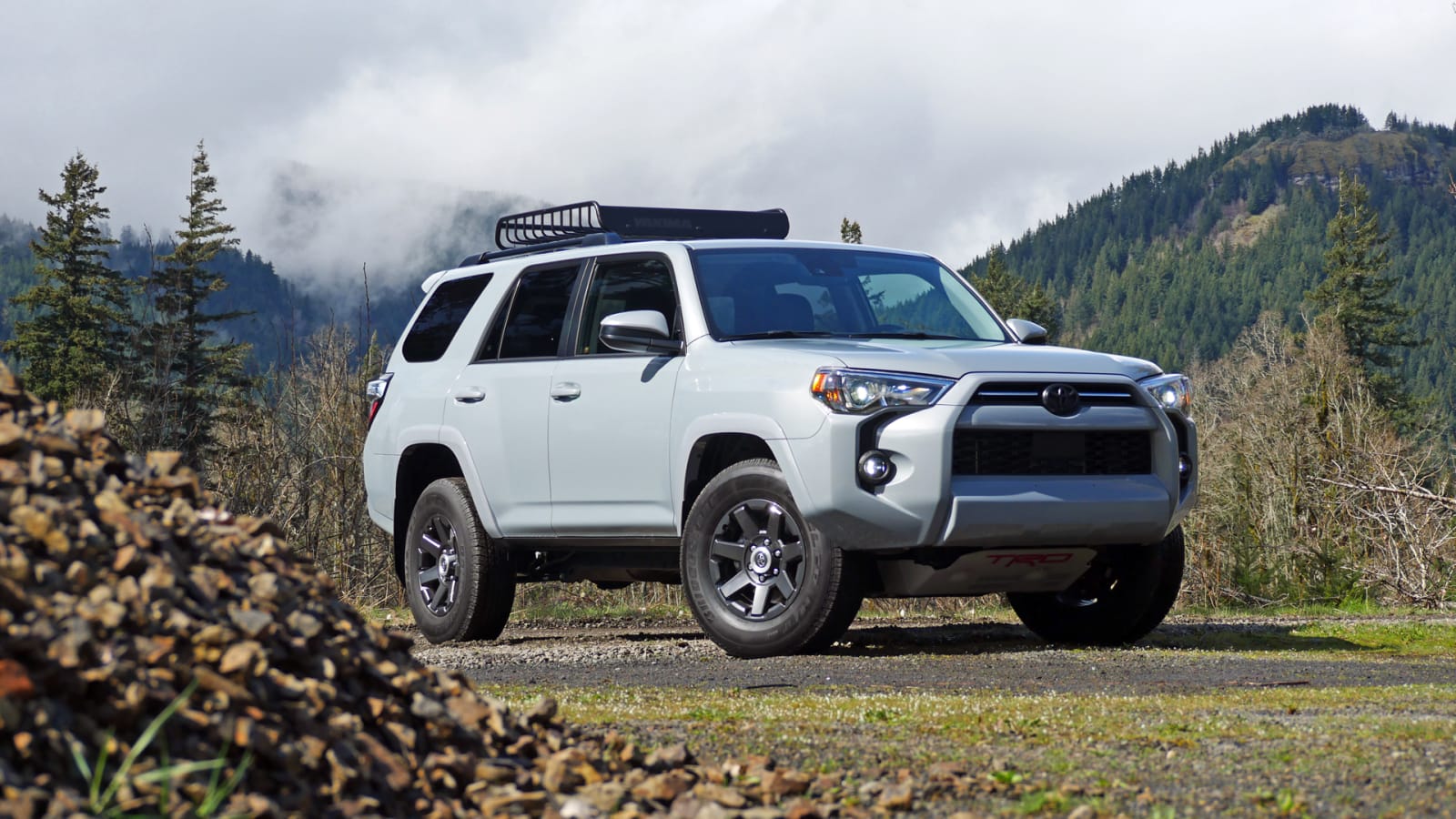 Much like the Jeep Wrangler, there are innumerable reasons to think twice about the 4Runner. The inefficient, slow and unresponsive powertrain represents most of the issues, but then, the antiquated interior and inherent issues of driving an old-school SUV on-road aren’t helping things. For most midsize SUV buyers, Toyota’s Highlander Hybrid would be a far more sensible choice. But, let’s say you don’t need to be that sensible. The 4Runner in many ways still makes more sense than the above Jeeps due to its bulletproof reliability, eye-popping residual values (the TRD Pro has been known to go up in value), and colossal cargo capacity. As a go-anywhere family vehicle, the 4Runner is hard to beat. It even looks pretty cool, which isn’t something that can be said about many family vehicles.

Auto Experthttps://automobiledot.com
As an Editor and an Automobile Geek, it's my pleasure to share my knowledge about Automobiles and their various aspects that can impact our lives.
Previous article‘Buying Nio stuff’: Chinese car company sells an entire lifestyle
Next articleLotus confirms new Emira will be its last car powered by gasoline