Here’s the new 2022 Chevy Silverado interior. It’s so much better

The primary complaint we (and many other auto journalists) have had with the current Chevy Silverado is the disappointing interior. But our complaints seem to have been heard, and the 2022 Silverado packs a fully redesigned interior, and from what we can see, it’s way better.

To start, let’s go over what bothered us about the previous interior. The whole design just looked, well, lumpy. There were bulges and angles all over the place, none of which seemed to fit in with anything else. The lumpy nature was exacerbated by some parts that didn’t seem to fit well, such as the glove boxes, and the fact that almost everything was in the same dark gray or black plastic, with just some half-hearted trim pieces to break it up. It was most egregious in top-dollar trim levels like the Silverado High Country shown below (and its GMC Sierra Denali sibling, which will assuredly get a similar makeover) where token bits of “wood” trim and some bronzey garnishes were almost laughable when compared to what you’d find in a high-end Ram 1500 or Ford F-150. 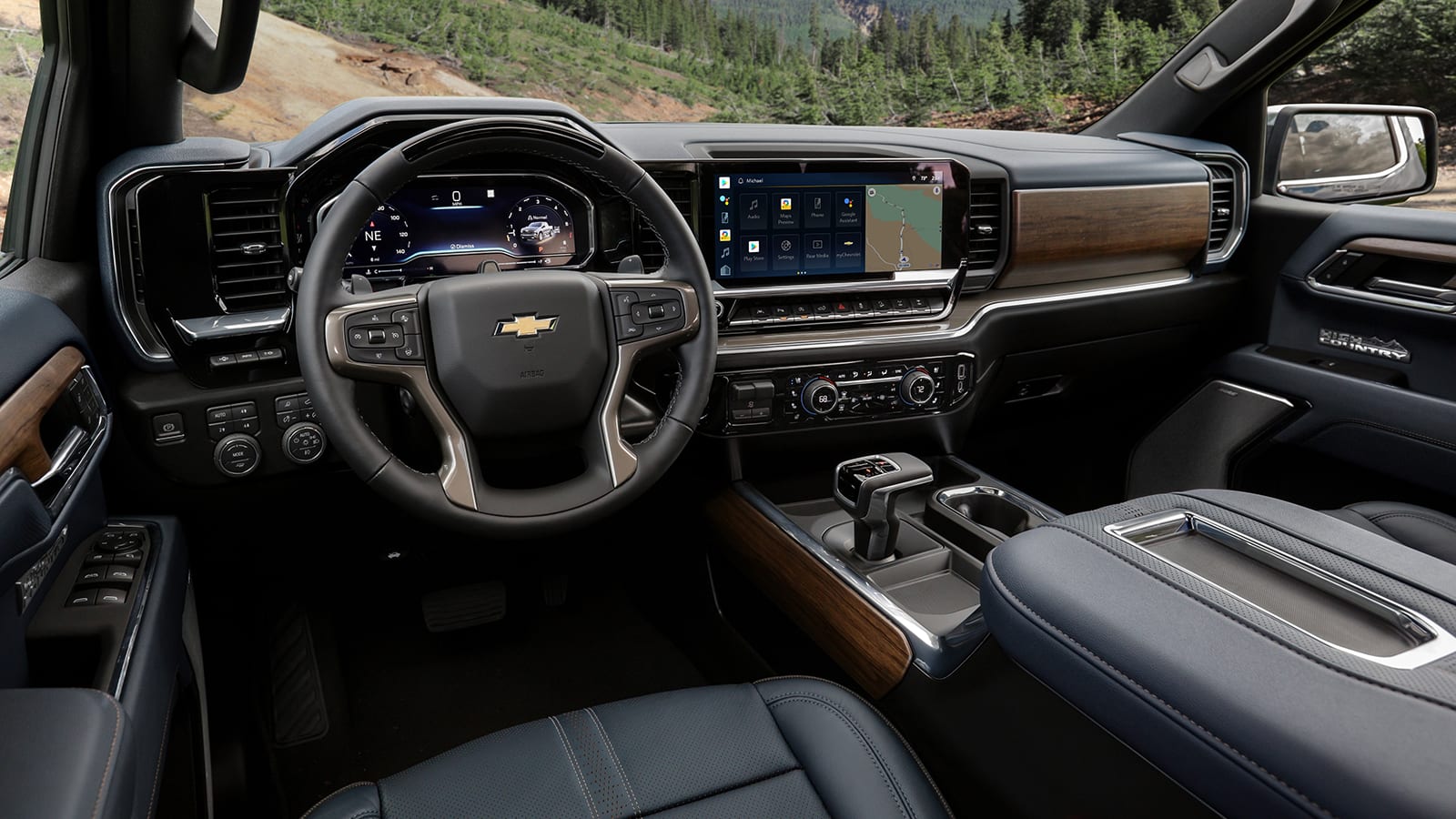 That brings us to the 2022 interior and it’s a remarkable improvement, especially in High Country guise. Instead of a chunky black plastic mass, there’s a nice mix of colors and textures such as the gloss black plastic around the screens, the matte finish on the main dashboard, the contrast trim splitting the dash and the door panels, and a few splashes of chrome. The dash has a modern shape that highlights width and hides the panel’s height. Trucks with a front bench seat still get the old-school column shifter, but those with bucket seats and a center console get a “fancier” electronic console shifter.

And then there are the screens, which are enormous and appear to be bright and crisp. The instrument display is 12.3 inches, while the horizontally oriented infotainment screen is 13.4 inches. These screens, as with the entire new interiors, are standard on the Silverado LT and above.

Now that does bring up something a bit odd. There are three trims below the LT: the Work Truck, Custom and Custom Trail Boss. These trucks will continue on with the old interior design, presumably because they’re designed to fit the smaller old touchscreen. Lower-quality and lower-priced materials may also have something to do with it, but that’s just conjecture. That being said, the old design was less problematic in lower trims since they’re usually purchased for the purpose of being a rugged, no-frills truck. The gap between it and those of comparable Ford and Ram trim levels were less obvious.

The new trucks will go on sale next spring, with pricing and other details likely to be revealed close to the on-sale date.

Auto Experthttps://automobiledot.com
As an Editor and an Automobile Geek, it's my pleasure to share my knowledge about Automobiles and their various aspects that can impact our lives.
Previous article2022 Chevy Silverado ZR2 compared to Ford F-150 Raptor, Ram 1500 TRX
Next articleAston Martin DB5 re-creates life-size Corgi diecast toy car for 007 movie