The Mustang became bigger and heavier each year during the early 1970s, scaling in at well over 3,000 pounds in the porcine ’73 models. The very first Mustangs were better than 500 pounds lighter, and so Ford decided to return to the idea of the Mustang as a sporty-looking, economical commuter car for the 1974 model year. The timing for this move was prescient, what with OPEC shutting off the oil spigots in late 1973. But Mustang aficionados saw a problem: while the original Mustang was based on the cheap-but-respected Falcon compact, the lightweight Mustang II derived its ancestry from the zero-fun, European-engined Pinto. Still, the Mustang II sold very well during its 1974-1978 production run, and I still find the occasional example during my junkyard travels. Most of those have been the more popular hatchbacks, so this final-model-year notchback coupe (described by Ford as the Mustang Hardtop) stands out from the crusher-bound pack.

This car appears to have been a lifelong Denver-area resident, sold new by the long-defunct Hover Motors at Federal and Speer. That’s just about five miles to the southwest of the place where its constituent materials will re-enter the global scrap-metal market. 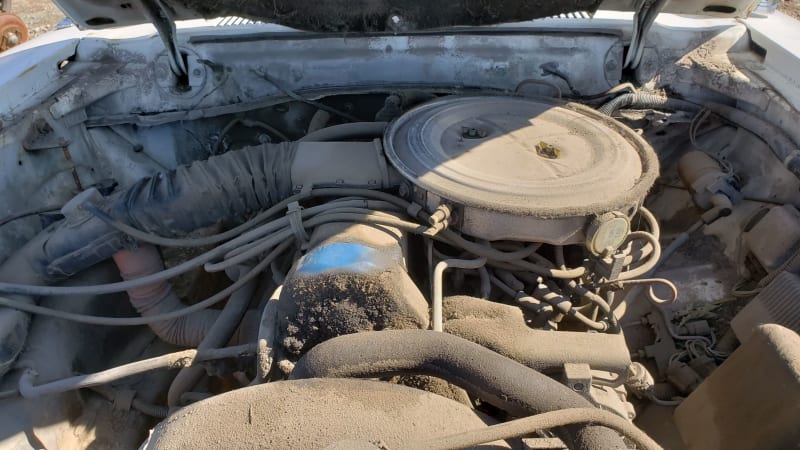 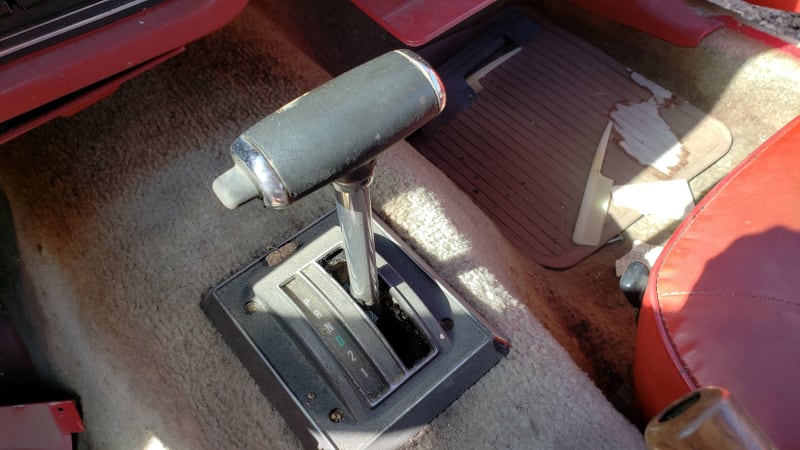 Because this car weighed a mere 2,646 pounds, 88 horses would have been adequate with a manual transmission. With this automatic, driving enjoyment must have been minimal. Still, though, this car looked a lot nicer than a Pinto (and didn’t have the same image problems), and would have worked fine as a commuter. 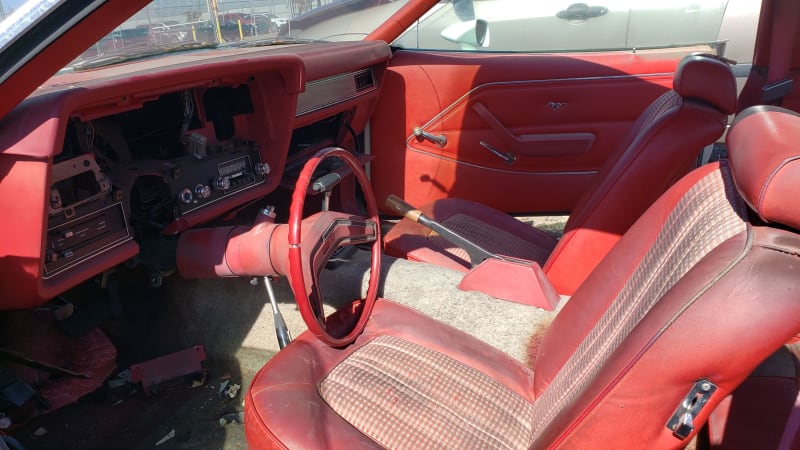 That’s a lot of hard red plastic and slippery red vinyl! This car appears to have the Fashion Accessory Package Interior, complete with “Fresno” body-cloth seat inserts; why Dearborn didn’t choose a more picturesque city as the name for that cloth is a puzzler 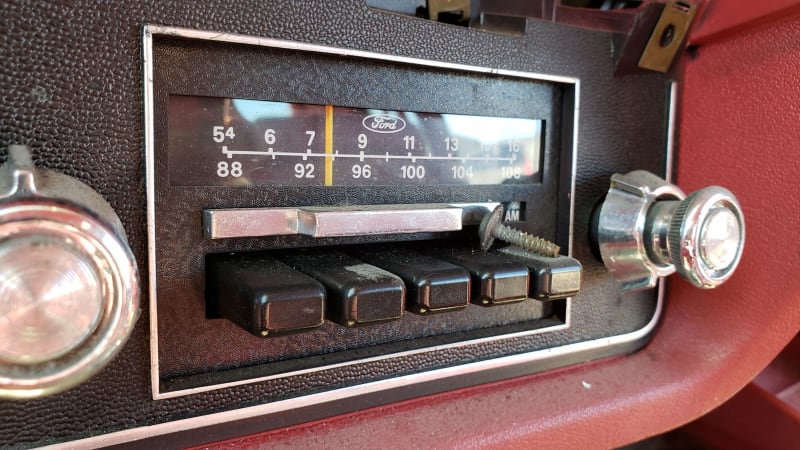 A typical Mustang buyer willing to spring for the slushbox and Bordello Red interior also wanted to listen to the finest hit songs of 1978 on static-free FM. That’s why this car has the groovy factory AM/FM radio, a $161 option (that’s about $670 today). 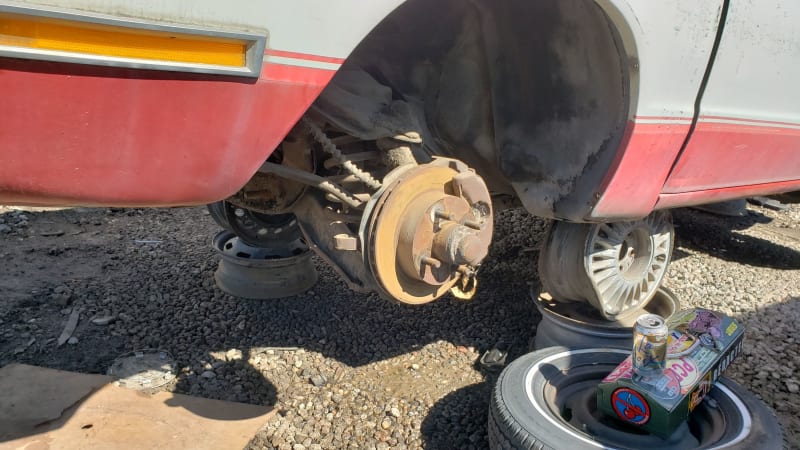 Twenty-five years ago, this front suspension would have been yanked within hours of appearing in the junkyard for installation in some hot-rodder’s Model A or T. In recent years, though, nearly every Mustang II I see in the junkyard goes to the crusher with this stuff still attached because you can buy higher-quality aftermarket versions of this hardware at reasonable prices. 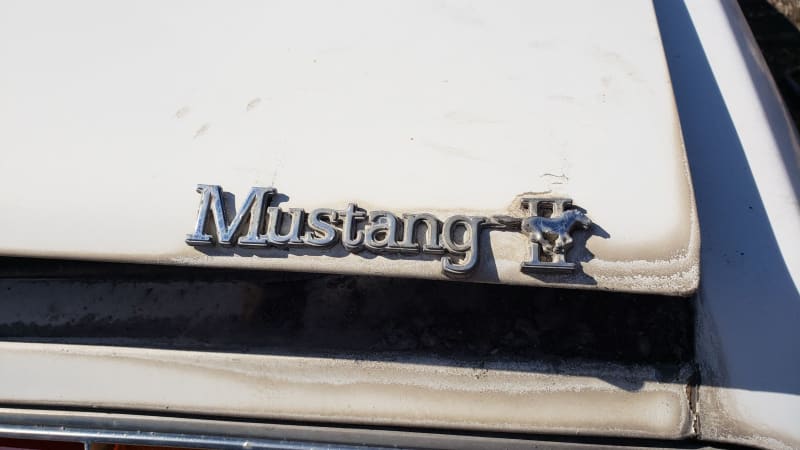 The following year, the Mustang got a bit lighter and much more modern going onto the Fox platform. Interest in the Mustang II has been on the rise in recent decades, though, so perhaps more of these cars will be spared the fate of this one.

Ever get the feeling that you wanted to cut out?

Just the thing for that disgruntled dental assistant.

Of course, the early Fox Mustang scored much higher on the Cocaine-O-Meter and the Disco-Rometer.

Auto Experthttps://automobiledot.com
As an Editor and an Automobile Geek, it's my pleasure to share my knowledge about Automobiles and their various aspects that can impact our lives.
Previous articleFord Mustang Mach-E GT, Ruf RCT Evo, Hennessey Venom 800 Supercharged F-150: This Week’s Top Photos
Next articleTesla says Black employees hold just 4% of U.S. leadership roles