Following BMW’s recent M Town video, which featured many iconic BMWs, about a dozen Easter Eggs and some notable influencer cameos, the Bavarians decided to release a sort of making-of video. However, it seems as if BMW didn’t want the clever Easter Eggs to end with the M Town video and wanted to continue them into this new making-of video, dubbed “The Drop”. One of which is more important than the entire video itself.

At the very beginning, starting at just six seconds in to be exact, we can see the new headlight design of the upcoming BMW X8 M. That very headlight design seems to be the same split design we’ve been seeing on a few recent BMW test mules. 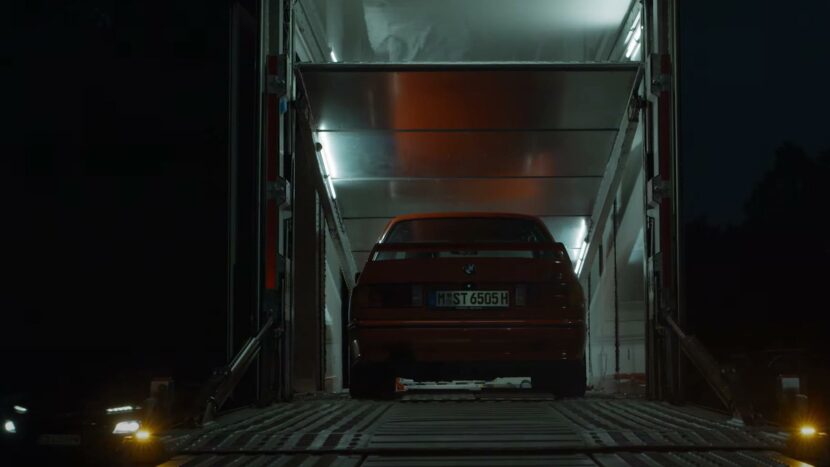 In this opening of this video, you see an E30 BMW M3 being unloaded from a truck at night. The bright lights of the trailer and the vibrant red E30 M3 command your attention, so you might miss the little Easter Egg hidden off to the left. Wait a few seconds and pay attention to the left side of the trailer, as you’ll only get a blink-and-you’ll-miss-it glimpse of the upcoming BMW X8 M’s headlights.

In that dark void next to the trailer, you’ll clearly see a vehicle approaching with a split headlight design, featuring an upper and lower headlight portion on either side of the front end. From the looks of it, the top eyebrow is not the main light and will likely house the turn signals as well as daytime running lights. While the bottom portion of the light seems to contain at least a vague similarity to BMW’s iconic dual-halo light design.

We also know that the car we’re looking at is a BMW X8 M, through just the art of deduction. We know that BMW is teasing a lot of new things in these videos and we know that only M cars are in them, without any regular Series BMWs involved. We can also tell that the car is an SUV, due to its size and how high off the ground the headlights are. So considering that no other BMW SUV has a headlight design like that and this must be an M car, the BMW X8 M is the only option.

To be honest, this looks nothing like a BMW headlight design, though. Maybe that’s the point, as this going to be featured on a standalone M Division product. So maybe BMW M wants to distance its design a bit from regular Bimmers and maybe use some of its own designs. However, seeing those lights in the darkness makes it more similar to that of a Hyundai than a BMW. We can already hear the pitchforks and torches being readied, as purists prepare to riot.

Auto Experthttps://automobiledot.com
As an Editor and an Automobile Geek, it's my pleasure to share my knowledge about Automobiles and their various aspects that can impact our lives.
Previous articlePre-orders for BMW iX are now open for Australian market
Next article2022 GMC Sierra Denali spy photos, new interior, Super Cruise