Rimac has introduced the production version of the C_Two concept unveiled in 2018. Called Nevera, it’s an electric hypercar with four motors that join forces to deliver 1,914 horsepower and a 1.85-second zero-to-60-mph sprint.

“This is it. This is the car I had in mind when I embarked on the ‘impossible’ journey 10 years ago. All of our hard work has resulted in the Nevera, our record-breaking hypercar,” company founder Mate Rimac said proudly.

Most of the Nevera’s key components were developed in-house in spite of high-profile partnerships with Porsche and with Hyundai, among other big carmakers, and nearly every part of the car has been improved since it made its debut as the C_Two at the 2018 edition of the Geneva auto show. Its 440-pound monocoque is the largest single piece of carbon fiber used in the car industry, Rimac claims, and it plays a significant role in increasing structural rigidity. It’s in this frame that engineers embedded an H-shaped, liquid-cooled lithium-manganese-nickel battery pack. Integrating the battery into the structure unlocks a near-perfect 48/52 front-rear weight distribution.

Four individual motors (one per wheel) linked to single-speed gearboxes join forces to develop 1,914 horsepower and 1,740 pound-feet of torque. Rimac pegs the Nevera’s zero-to-60-mph time at 1.85 seconds, a figure which makes it one of the quickest production cars on the planet, and its top speed at 258 mph. On a drag strip, the Nevera reportedly posts an 8.6-second quarter-mile time. It’s even quicker across the board than Rimac expected.

The 120-kilowatt-hour, 6,960-cell battery stores enough electricity to deliver up to 350 miles of driving range on the WLTP testing cycle used in Europe. Charging it from zero to 80% takes 19 minutes when using a 500-kilowatt quick-charger. It’s presumably heavy, but the Nevera’s weight hasn’t been revealed. Rimac pointed out bringing this mammoth amount of power to a stop required developing a complex braking system that includes an electro-hydraulic booster, a pedal feel simulator, Brembo carbon-ceramic rotors, and a 300-kilowatt regenerative function.

Designers made small but meaningful visual tweaks as the C_Two transitioned into the Nevera. Aerodynamic efficiency increased by 34%, while the revised body kit channels more cooling air to the brakes and the powertrain. Data fed to algorithms allows the Nevera to adjust its various active aerodynamic parts (like the underbody flap and the rear wing) independently for maximum downforce, low drag, or a balance of the two, depending on the situation.

Interestingly, the Nevera is not fitted with electronic stability and traction control systems. Engineers instead developed a technology called Rimac All-Wheel Torque Vectoring 2 (R-AWTV 2) that optimizes grip by calculating the amount of torque each wheel needs to receive. It can make the drivetrain front- or rear-biased, for example. 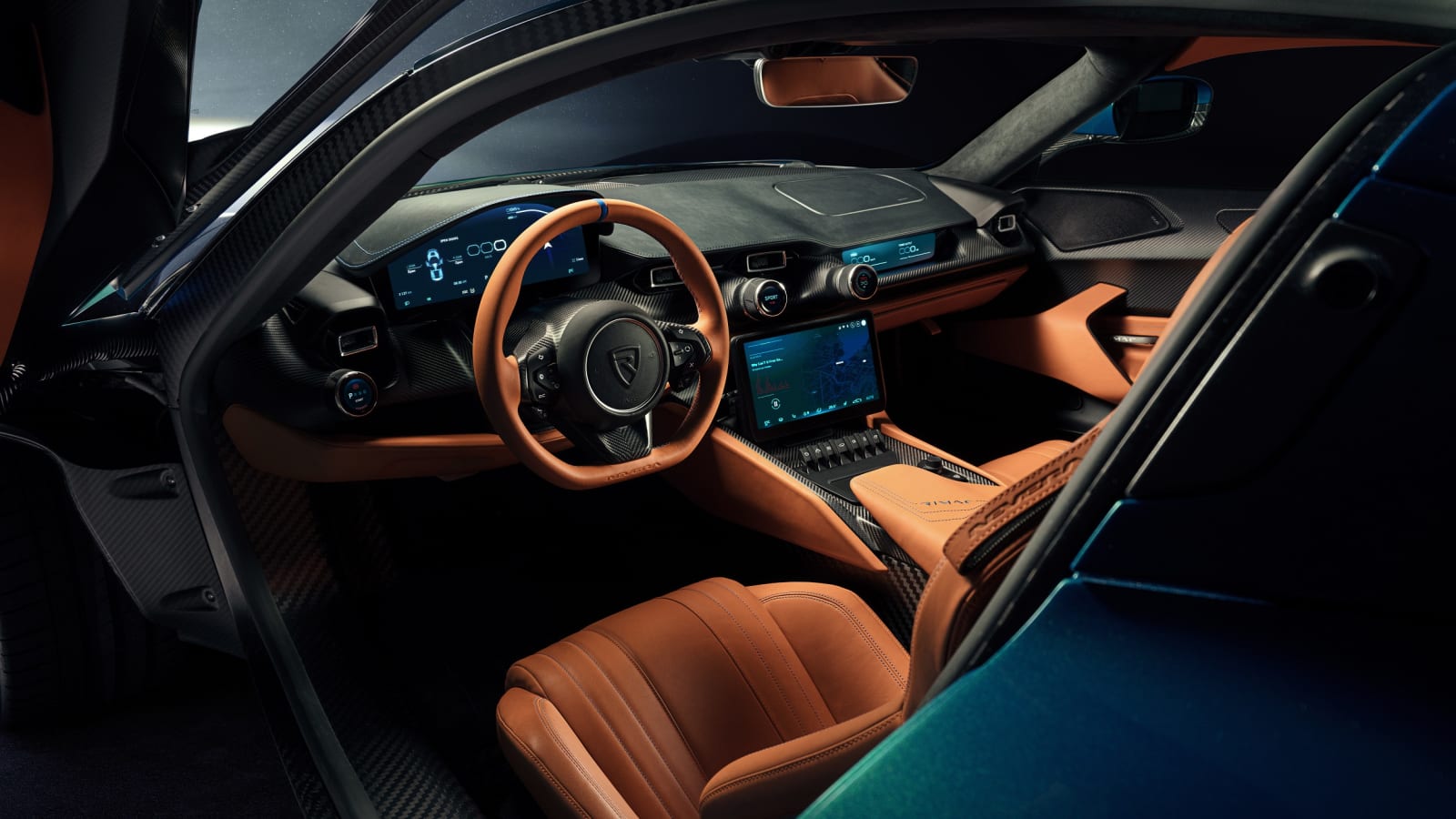 Rimac will make 150 units of the Nevera, it told Autoblog there are still build slots available, and each one will be personally tested and signed off by Mate Rimac before it’s sent to its new home. Pricing starts at €2 million, which represents about $2.4 million at the current conversion rate, before options enter the equation. Built in Croatia, it’s homologated for road use globally, which is an impressive feat for such a small company. Many limited-production supercars are show-and-display-only due to cost and time constraints; Rimac chose not to cut corners.

Buyers who sign the dotted line will be invited to travel to Croatia to configure their car. Several styling packages will be available, including GT, Signature, and Timeless, and customers will also have the option of starting from scratch. Regardless of the option chosen, Rimac stresses that it won’t make two identical versions of the Nevera.

One point that shouldn’t be understated is the leap the Nevera represents for Rimac. Its first car, the 1,224-horsepower Concept_One, was limited to eight units, though one was destroyed after former Top Gear host Richard Hammond accidently drove it off a mountain road. Going from a run of eight cars to one of 150 unit requires a massive operational expansion. Rimac recently hired its 1,000th employee, and it hopes to increase that number to 2,500 in the coming years as it invests nearly $250 million into building what it calls a Rimac Campus.

What’s in a name?

The name “Nevera” reflects the car’s Croatian roots. According to Rimac, locals know and fear the nevera as a quick, unexpected, and mighty Mediterranean storm that races across the open sea off the coast of Croatia.

Auto Experthttps://automobiledot.com
As an Editor and an Automobile Geek, it's my pleasure to share my knowledge about Automobiles and their various aspects that can impact our lives.
Previous article2022 Volkswagen Golf GTI First Drive Review | Straight out of central casting
Next articleProduction version of 1,914-hp C_Two electric hypercar revealed