Our long-term 2019 Subaru Forester Touring’s interior is one area we wanted to really hone in on over a number of months with it. Though Subaru’s interior functionality and space have long been key reasons people choose the brand, interior design and quality have been reasons they’ve looked elsewhere. A compromise needed to be made.

Subaru is trying to lift itself out of this rut with the higher trims of its latest models. The upmarket interiors of the Outback and Legacy are swathed in decent-feeling leather (or leather-substitute), contrast stitching, attractive trim and piano black accents. However, Subaru’s best seller, the Forester, is a mixed bag of new, premium Subaru and old, sensible-shoes Subaru.

The Touring model we’ve lived with over the past year is one of the best examples of this most-of-the-way-there design. Its two-tone style with medium brown leather, white stitching and black contrasting elsewhere is decidedly upmarket. The multi-color, design-heavy floor mats are a nice touch, but the overall design falls flat in a number of other areas. As an example, some of us like the wide array of trim materials used on the dash and doors. Others find the combination of a plasticized pattern, stitched leather and traditional hard plastic to be a discombobulated mess (You may be able to detect which side of the fence I sit on — it’s a weird array of rugged and luxury that just isn’t executed well).

In general, the design is inoffensive and basic, which makes operation of the interior easier than some of its more style-heavy competitors. Large, round dials positioned within easy view and reach control the climate and audio settings. Every button is well-labeled and big enough that we never found ourselves stabbing away and pressing the wrong thing. It even has an incredibly normal and traditional gear lever, something that isn’t a given these days. Our biggest gripe with the controls is their piano black coating and appearance. They’d look clean for a couple days after wiping them down, but dust would gather quickly, especially in the gear lever surround where dirt and debris always seems to settle. That said, it looks great when new, and makes a good first impression when trying to sell a car.

The interior’s usability and utility are middling. A small cubby right where the 12-volt and USB ports are positioned can hold a phone, though larger phones will stick out over the lip that holds it in. You get two central cupholders (eight total throughout the car) with a removable flap — they’re on the small side, but can hold most regular or small size drinks bought at a gas station. The outdoorsy Forester will also force that 32-ounce Nalgene elsewhere, as the door pockets bend and deform if you try and squeeze it in there — not good. You can check out a thorough test of the Forester’s cupholder situation versus the Honda CR-V here. 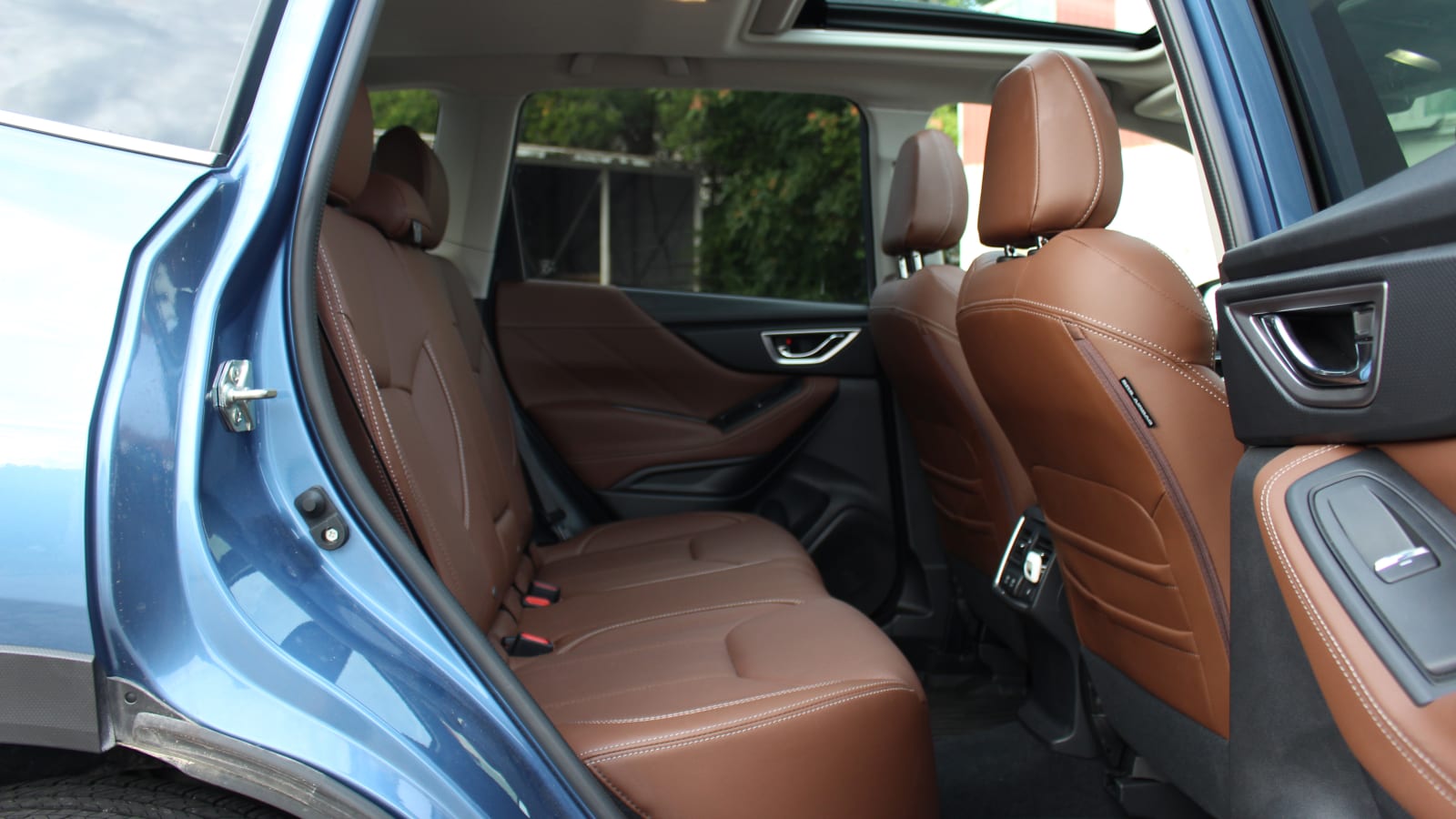 Backseat passengers will find a similar level of ambiance as those in the front seat when it comes to materials and trim. There’s plenty of legroom for its class, and it even has heated rear seats and dedicated air vents. Two USB ports will keep those in the back occupied and charged in long road trips. You can read a full breakdown of the tech inside the Forester in our Infotainment Review here. It’s generally simple and easy to use, but lacking in functionality and pretty design.

As for other gripes we’ve had with our Forester’s interior, the large sunroof sprang a leak a few months back. The driver-side automatic window switch acted finicky for a short time, but somehow fixed itself — we even took it to the Subaru dealer for this one, yet they could find nothing wrong with it. And while the visibility in all directions is laudable, this crossover is one of the loudest out there with its buzzy flat-four and lack of wind noise isolation.

The Forester’s interior is average for the segment. It’s attractive in some ways, confusing in others, but ultimately comes off as a solid contender amongst a field of other similarly average interiors. You can certainly do better right now, but we still think this is a step in the right direction for future Subarus to come.

Auto Experthttps://automobiledot.com
As an Editor and an Automobile Geek, it's my pleasure to share my knowledge about Automobiles and their various aspects that can impact our lives.
Previous articleBMW iX to go on winter sports tour through Europe
Next article2 Series Coupe Caught Again but in Snow This Time